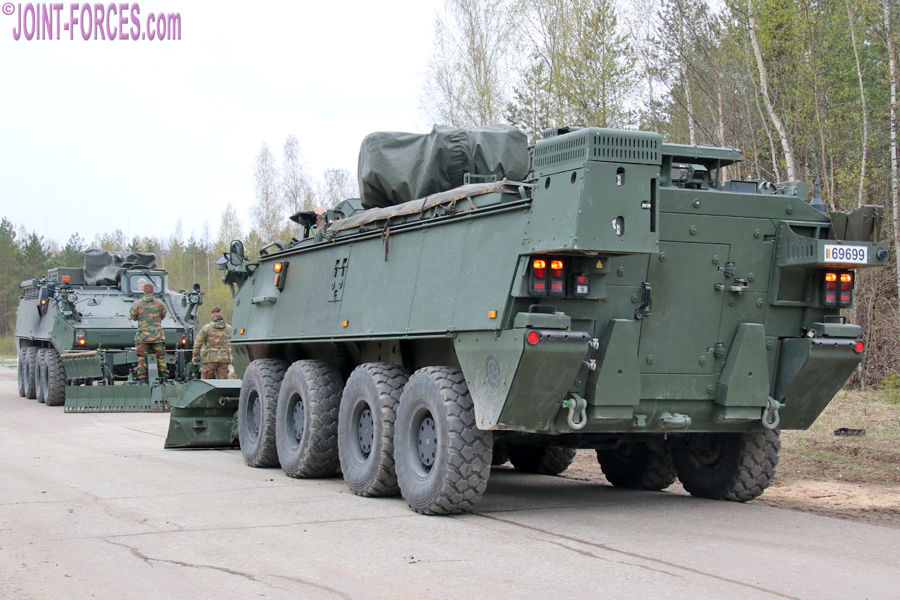 In this fifth and final part of our mini-series on the Belgian Piranha IIIC AIV (Armoured Infantry Vehicle) fleet I am focussing on the Engineer and Ambulance variants, which respectively accounted for 18 and 12 of the originally planned fleet of 242. I am uncertain how many of the Engineer version survived the downsizing of the Belgian fleet, as the number stated (138) on the last archived version of the Belgian MoD page is clearly wrong and most likely refers to all variants, but the official figure of six surviving ambulances makes sense to me.

Two of the Engineer variant were fielded with the Belgian eFP contingent during the live-play phase of Exercise KEVADTORM 2019 in Estonia, both of which can be seen here. As it pretty obvious, one was fitted with a Pearson Engineering surface mine plough and the other was fitted with a dozer blade from the same British manufacturer. Both vehicles self-deployed around 125km eastwards by road from the Tapa base to a Forming Up Point on the Sirgala Training Area, where the crews quickly fitted the plough and the blade, which had been delivered separately on a flatbed truck and transporter trailer.

Incidentally, there is also a Belgian Recovery variant which has a simple dozer blade at the front, used primarily as a ground anchor when winching, but although I am sure there must have been one of these deployed with the contingent I’m afraid I did not spot it in the field to photograph it; this version is easily identifiable by the external fairleads for the onboard winch.

The Ambulance version is visually almost identical to the rest of the Belgian Piranha IIIC family, except for a slightly higher rear compartment roof which starts above the gap between second and third road wheels. Other than the red cross panels, which are demountable, the instant identifier is actually not the higher roofline but the lack of an FN Herstal ARROWS 12.7mm Overhead Weapon Station. This variant is crewed by four and has space for six seated casualties or four on stretchers, or a combination of three plus two patients. I only spotted a single Piranha Ambulance deployed out east during the exercise.

That concludes my photo round-up of the Belgian Piranhas, but as the Danish contingent deployed on KEVADTORM 2021 in Estonia took a small number of Piranhas in addition to their primary CV9035DK infantry fighting vehicles I plan to bring a very brief update on that nation in due course.