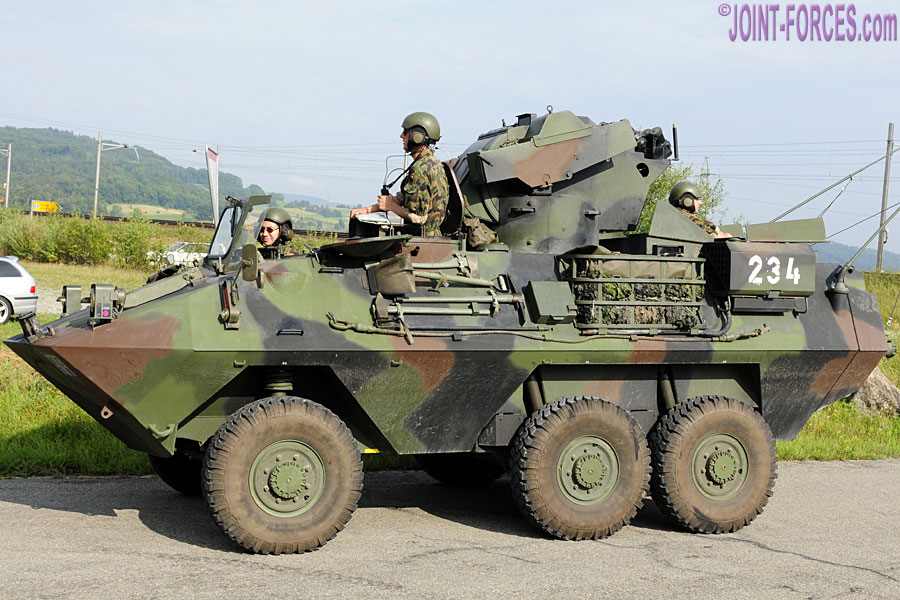 Our recent articles on Romania’s Piranha III and Piranha V prompted Carl and myself to delve back into our archives for more Piranha variants, writes Bob Morrison.

The MOWAG Piranha started life in the 1960s as a homegrown 4×4 armoured personnel carrier design developed for the Swiss Army, which entered service in 1972, but a 6×6 version was soon developed and this became the the basis first for the Canadian Army AVGP (Armoured Vehicle General Purpose) and subsequently the Australian ASLAV, Canadian LAV, USMC LAV-25 and US Army Stryker 8×8 wheeled Infantry Fighting Vehicles as well as later 6×6 and 8×8 MOWAG Piranha variants for many other nations.

MOWAG GmbH, its name taken from Motorwagenfabrik or Motor Vehicle Factory, was established in 1950 in the town of Kreuzlingen on the Swiss side of Lake Constance (aka the Bodensee) as coachbuilders and manufacturers of small commercial vehicles. Their first military vehicle model, the T1 4×4 troop carrier, was built in quantity for the Swiss Army from 1953 and their first armoured vehicle design was the MR-6 Wotan 4×4 light APC built a decade later under licence in West Germany for the Bundesgrenzschutz or Border Guards; what is now usually referred to as the Piranha I, could be considered an evolution of the Wotan. Although the Piranha I served with neutral Switzerland’s armed forces until the mid-1990s, neither Carl nor myself had the opportunity to photograph these in the field, but in 2009 Carl photographed its successor, the Piranha II 6×6, on Exercise PROTECTOR 09. In 2010 MOWAG was bought by General Dynamics and is now a part of GDELS (General Dynamics European Land Systems).

Known by the Swiss Army as the Radschützenpanzer, a term which has no direct English translation but has its origins in the Swiss bicycle infantry battalions, three versions of the Piranha II were in service during 2009 and Carl was able to photograph two of these on his assignment in Switzerland. The Piranha Pzj (Panzerjäger or Tank Hunter) TOW 6×6 version, which entered service from 1989, has twin TOW (Tube-launched, Optically-tracked, Wire-guided) missile launchers and is crewed by five. The Piranha San Pz (Sanitätsfahrzeuge Panzer or Armoured Ambulance) 6×6 version, which entered service in 2006, is crewed by driver plus one to four medical attendants (dependant on role) and can carry either two stretcher casualties, six seated patients or a combination of one plus three in addition to one medic. From 2008 onwards, as part of the Army XXI reforms and downsizing, around half of the Piranha II TOW vehicle fleet would be re-roled and converted as the Mowag Piranha Kdo Pz (Kommando Panzer or Armoured Command Post) 6×6 with a 12.7mm Remote Weapon Station instead of the TOW turret, but we have not photographed these in the field.

The Piranha San Pz 6×6 is fractionally longer and wider, at 6400 x 2630mm, but even though it has an extended height rear compartment to provide headroom for the medics it only measures 3060mm to the top of the roof. This version, of which 40 were ordered by the Swiss MoD, has an increased GVW of 12,000kg allowing 1,100kg payload. Mechanically it is similar to the Piranha Kdo Pz 6×6 version.

In the next album in this series we plan to look at the Piranha IIC 8×8 – known as the Radschützenpanzer 93 – in Swiss service before turning our attention to Irish and then Danish versions of the later Piranha III member of the family.