Home > Features > Spring Storm In The Baltic Region ~ Part One

Spring Storm In The Baltic Region ~ Part One 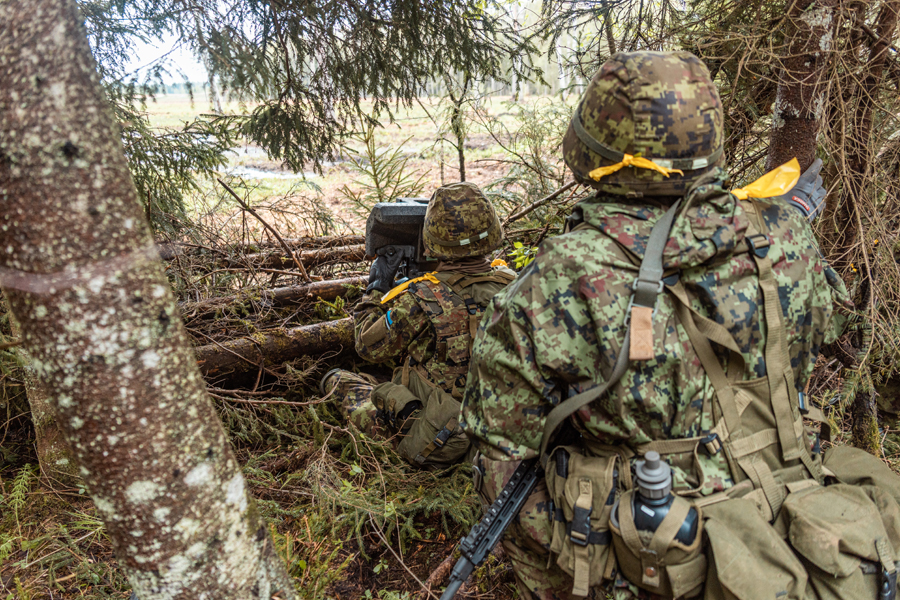 In Part One of Spring Storm In The Baltic Region we take a brief look at the Reservists of Estonia’s 2nd Infantry Brigade who played OpFor, reports Bob Morrison.

First of all I must point out that this part of the story is photographically slightly out of sequence as the accompanying images were taken during week commencing 17th May, which was the first week that the Reservists deployed in numbers out onto the Central Training Area (aka Tapa Polygon) to act as Yellow Force opposition, or OpFor, for the FTX (Field Training Exercise) phase of KEVADTOTM / SPRING STORM 2021. Prior to this, due to major replanning caused by pandemic limitation measures, the enemy for the linked training exercise programme (SWIFT RESPONSE and FIRES SHOCK) which took place over the preceding ten days was either notional or provided by elements of 1 [Estonian] Infantry Brigade and the NATO eFP Battle Group.

A little bit about Estonia’s more recent history to set the scene: In simple terms, following 150 years of Swedish rule the Russia Empire conquered what we now know as Estonia in 1710 and it was not until after the 1917 Russian Revolutions that the Independence movement gained traction leading to establishment of full sovereignty (with British military help) in early 1920. For the next couple of decades the Estonians were left in peace until in 1939 Hitler and Stalin agreed to carve up Eastern Europe between themselves; first the Soviets invaded Estonia while they thought they were Nazi Germany’s best friend, then the Germans turned on them and pushed the Red Army back during Operation BARBAROSSA, then the Soviets reoccupied their neighbours again in 1944 during their drive for Berlin and remained there until the fall of the Soviet Union. Estonia declared Independence once again in 1991, though it would be more than two years on before the last of the Russian military occupiers eventually went home. Ten years later, in 2004, the tiny nation which has a population of just 1.33 million joined NATO and then the European Union.

From this potted history it is probably easy to see why defence plays a major part in Estonian life and, although the tiny Baltic nation started to move towards reducing its military spending early in the last decade, it is no surprise that they quickly changed their mind when the neighbouring Russian Federation invaded Ukraine’s Crimean Peninsula in 2014 and then threw its resources at destabilising a major part of Eastern Ukrainian territory. Rather than doing away with national service in favour of a smaller all-professional army, Estonia retains both Conscription and Reserve service: “The Constitution of the Republic of Estonia foresees mandatory duty to perform service in the Defence Forces of all physically and mentally healthy male* citizens.”

Quoting direct from the English language section of the Estonian Defence Forces website:-

Of the nation’s two Infantry Brigades, 1st Infantry Brigade represents the main manoeuvre unit of the Estonian Defence Forces, including the mechanised Scoutspataljon (Eesti Scouts) plus supporting assets and includes the majority of the units trained during the conscript service period, whereas 2nd Infantry Brigade has a small peacetime core but can be massively expanded on the threat of war by activating trained Reservists. As it was mostly Estonian personnel serving with 1st Brigade that I photographed in the field, the accompanying photos of Reservists serving with 2nd Brigade and acting as Yellow Forces have been provided by EDF photographers: I did actually encounter the troops with yellow tapes several times during KEVADTORM 2021 (and indeed my escorts were themselves Reservists serving in media operations roles) but as the defenders were in prepared positions awaiting advancing Blue Forces we did not linger to take photos in case we gave them away.

Most of the troops in the accompanying photos were serving with 22 Jalaväepataljoni, or 22 Infantry Battalion, which is one of two new Reservists battalions aiming for full validation by 2022. If reactivated onto a wartime footing this battalion would join the currently permanently established Kuperjanov (21) Jalaväepataljoni, the fledgeling 23 Jalaväepataljoni, and Reserve Air Defence, Anti-armour, Artillery, Engineer and Recce formations, plus a permanent Headquarters and a Combat Service Support Battalion, to give a primarily Motorised Infantry Brigade available to deploy at very short notice.

Being motorised the 2nd Brigade primarily uses trucks, rather than armoured vehicles for transportation, but they do have a number of SISU Pasi 6×6 wheeled APCs at their disposal. Normally the Reservists are issued with the older weapons on the Estonian inventory, with newer kit naturally going to the Regulars, but it was noticeable that the new R20 RAHE assault rifle is already trickling down to replace legacy 5.56mm Galil and 7.62mm Ak4 (G3) stocks.

I plan to look a little further at the Estonian Defence Forces, particularly 1st Brigade and the Scoutspataljon, in a later part of this series but next my cameras will focus on FIRES SHOCK ~ the artillery live-fire mission to suppress enemy positions while the reinforcing JEF airborne assault went into Nurmsi Drop Zone.

*Conscription is presently only compulsory for Estonian males but there is a major drive on to increase the number of female soldiers and officers serving with the EDF.