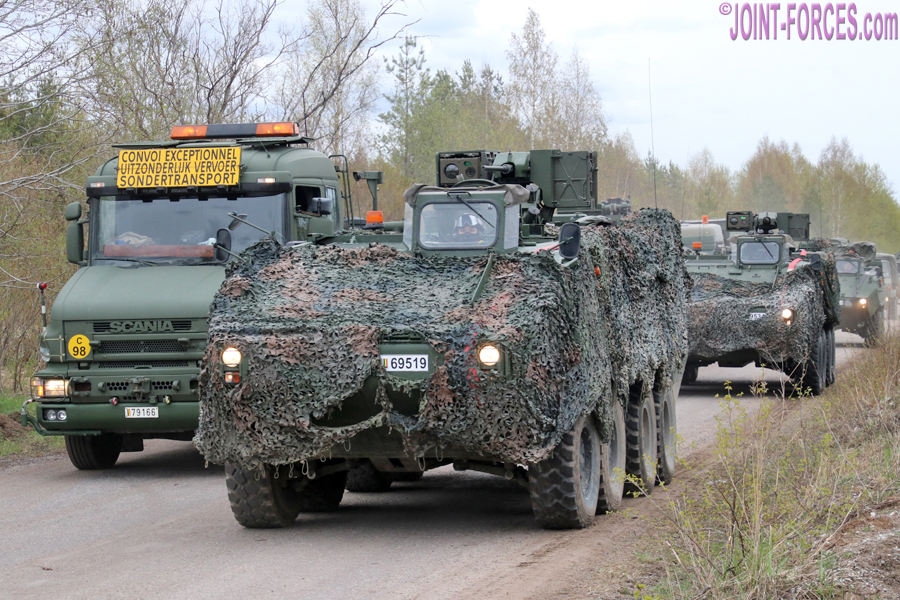 Seven different Piranha IIIC versions were then procured by the Belgian Ministry of Defence, in two batches, with the basic 8×8 Armoured Personnel Carrier being the most numerous model. In total 99 APCs, known as the AIV (Armoured Infantry Vehicle) FUSELIER, spelling as per Belgian MoD documentation, were ordered primarily for the infantry battalions of the Motorised Brigade; these are expected to remain in service until replaced by the French VBMR Griffon 6×6 between 2025 and 2030. A batch of 24 Command Post versions, externally near identical to the FUSELIER or FUS apart from additional antennae, was also ordered.

Powered by a Caterpillar C-9 EURO III in-line 6-cylinder diesel engine, developing 298 kW @ 2,200rpm, the Belgian AIV Piranha IIIC 8X8 FUSELIER has a top road speed of 105km/hr. At a cruising speed of 70km/hr the vehicle has a range of 600km, but at a steady lower speed on metalled roads or graded tracks its maximum range can exceed 800km. Overall dimensions are given by the Belgian MoD as 7770 x 2720 x 2930mm high, kerb weight is 19,430kg and GVW is 22,600kg; it therefore fits within the air transportation envelope of the A400M military transport aircraft.

Both the FUSELIER APC, which seats up to ten including driver and commander, and the Command Post variant, which seats up to six, are fitted with the FN Herstal ARROWS or Advanced Reconnaissance & Remotely Operated Weapon System. Operated from under armour, this weapon system mounts a 12.7mm heavy machine gun plus two rows of smoke dischargers. Its dual field of view optics offer both day and night imaging with a detection range in excess of 2,000m by day or 1,200m at night.

The Piranha IIIC armoured personnel carriers and the command post pictured here were serving with the Belgian Bataillon de Chasseurs Ardennais company group deployed in 2019 with the UK-led NATO eFP (enhanced Forward Presence) Battle Group Estonia (BG EST). The first five photos on this page are of the same FUSELIER, registration 69519, and were taken at more than one location on different days. During the FTX (Field Training Exercise) phase of KEVADTORM 19 the Belgian vehicles were mostly covered with scrim camouflage, which hid a lot of the detail, but the two shots of 69562 are clear of scrim.

The Command Post vehicle was photographed deployed forward with at least two platoons of infantry plus both combat engineer and fire support platoons; I will cover their vehicles in a future article. Unfortunately, and not unexpectedly, I was unable to photograph the interior of the Command Post. Other than the additional telescopic antenna, I was unable to spot external differences.