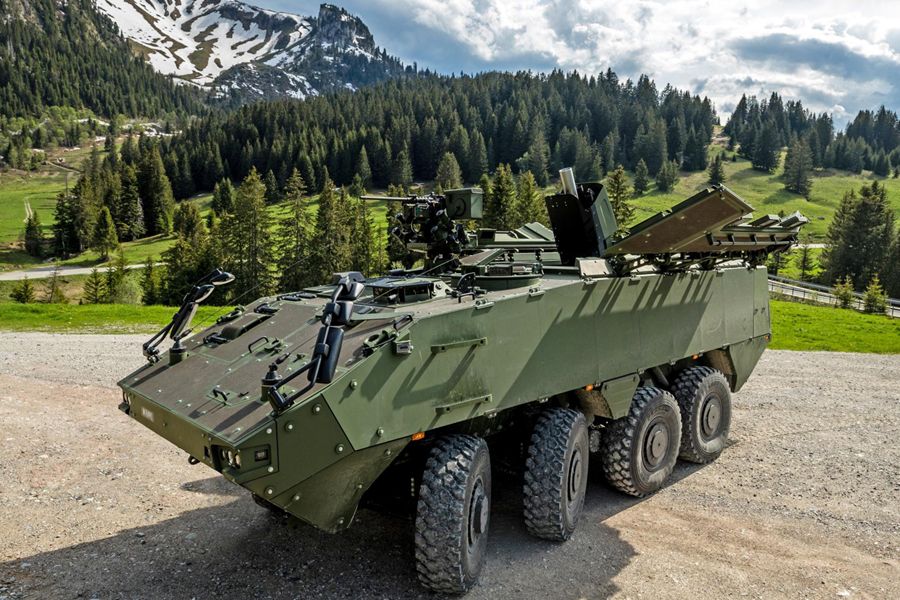 While researching the next article in our series on the GDELS-Mowag Piranha we spotted this recent release on the new Swiss 120mm mortar variant.

Armasuisse Press Release, Bern, 23 February 2021: [auto-translated] After verifying the evidence of compliance with military requirements, Armasuisse has signed the serial production contract with general contractor GDELS-Mowag for the production of 32x 12cm [120mm] mortar systems. RUAG SA supplies the mortars as a subcontractor of GDELS-Mowag.

The troop tests with the prototype of the 12cm [2016] mortar ended in the spring of 2020 and with them, the verification of evidence of compliance with military requirements. The system meets military requirements and is operational in its current form. The conclusions drawn from the troop tests and other technical tests carried out by Armasuisse and its industrial partners will be taken into account for series production.

Start of series production: The signing of the contract marks the start of serial production, which will take place in several phases. The first mortar systems can be handed over to the troops from 2024. In accordance with the Army Message, the acquisition of the other components of the 12cm [2016] mortar project (ammunition, vehicles, ammunition supply equipment) and the necessary adaptations to the level of command vehicles and software will run in parallel.

About the 12cm [2016] mortar project: The Federal Parliament approved the 12cm [2016] mortar project as part of the 2016 Army Message. The overall package includes 32 mortar systems (carrier vehicles and mortars), 12 trucks, ammunition, logistics equipment, as well as adaptation of 16 command vehicles already in service. The carrier vehicle is the Piranha IV 8×8 wheeled armoured infantry vehicle from GDELS-Mowag (who is also the general contractor for the weapon system), the mortar chosen is the Cobra weapon system from RUAG SA. The commitment credit amounts to 404 million Swiss francs for the entire project. Due to difficulties with the mortar, the project could not proceed as initially planned. As these difficulties resulted in a 34-month delay, the project planning had to be reviewed in 2018. Since then, the project has been on track.

Objective and purpose of the project: The Minenwerferpanzer 64/91 were decommissioned in 2010. Since then, combat battalions have no indirect fire support with 12cm mortars. Specifically, this means that the curved trajectory capability in the upper angles group for built-up area combat has been lost. This gap needs to be filled. With the new 12cm mortar, the Army regains this capacity and has a modern, efficient and precise system, which is suitable for interventions in built-up areas.