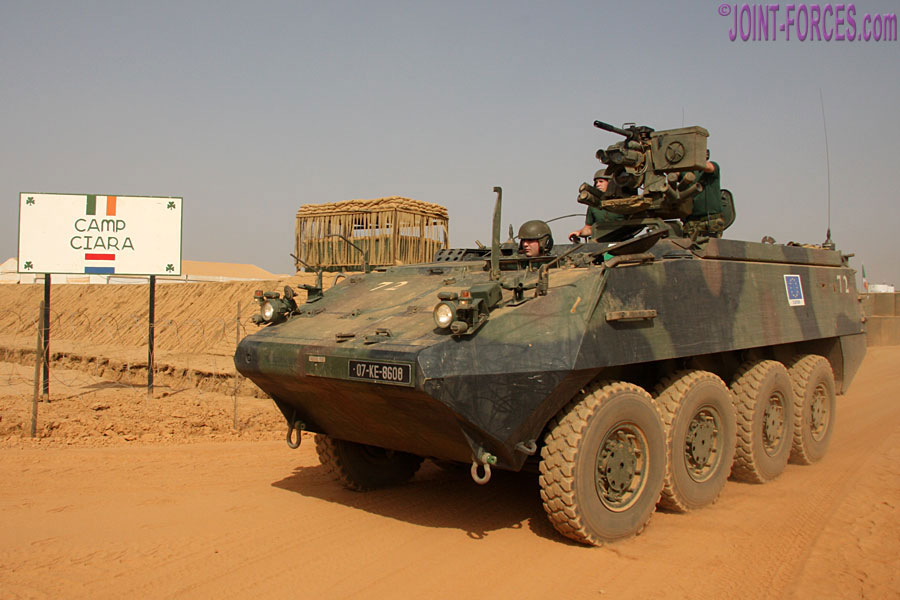 Our recent articles on Romania’s Piranha III and Piranha V prompted us to delve back into our archives for images of Piranhas in Irish service, writes Bob Morrison.

Back in 2008 and 2009 our much missed colleague Yves Debay*, assassinated in Syria in 2013, worked with the Irish Defence Forces (Óglaigh na hÉireann) EUFOR peacekeeping contingents in both Kosovo and Chad where he photographed their Piranha IIIH personnel carriers.

The Mowag Piranha III 8×8, first unveiled in 1996, is a heavier and up-armoured derivative of the Piranha IIC which has a combat weight of around 18.5 tonnes as opposed to the 11.0 tonnes of the second generation 8×8 armoured personnel carrier. Lengthwise it is only fractionally longer than its predecessors but its composite armour protection increased its width to around 2850mm, though it is still transportable inside the C-130 Hercules. Eire ordered an initial batch of 40 Piranha IIIH vehicles (34x Infantry Section, 4x Command, 1x Ambulance and 1x Recovery) in late 1999, all of which had entered service by 2002, and it increased its fleet to 65 and then 80 with two subsequent orders in 2003 and 2005.

The later Irish orders included two more variants: the Cavalry Reconnaissance Vehicle or CRV, with a Remote Weapon Station mounting a 40mm grenade launcher and a range of optical surveillance devices for its primary recce mission; and a sixth version with a KONGSBERG Protector 12.7mm heavy machine gun Remote Weapon Station. This 12.7mm RWS version was used by the Irish Contingent to UNIFIL alongside the standard turreted ISV. Unlike the earlier Piranha IIC, the manned turret version Piranha IIIC Infantry Section Vehicle does not have a Commander’s hatch behind the Driver, who is positioned a little further back on this later model due to the thicker armour protection; usually the turret weapons fit is a 12.7mm heavy machine gun with coaxial 7.62mm general purpose machine gun.

Yves’ photos of the KFOR (Kosovo Force) Irish Contingent Piranha IIIH APC were taken in 2008 in a small village near the town of Dobratinë (Добротин) south of the capital Pristina; at that time the village was home to eleven hundred Kosovar Serbs and one Romanian family, along with an Orthodox church. The contingent from Eire was roughly 220-strong, divided into three infantry sections plus a logistic battalion and their primary mode of armoured transport was the Mowag Piranha IIIH. The Piranha seen here was one of twelve deployed to Kosovo; normally in periods of low tension the Irish would patrol in light trucks, rather than under cover of armour, but they took this armoured personnel carrier out on patrol specifically for Yves’ visit to show him their capability.

The following February Yves visited EUFOR in Chad, where at the time of his trip a total of 386 Irish soldiers, 62 Dutch Marines and 19 French troops were serving in eastern Chad with the Irish Battalion at Camp Ciara in Goz Beida as part of Multinational Brigade South or MNB-S. The Irish EUFOR Battalion, drawn mostly from the 3rd Infantry Regiment, was organised into a Headquarters Company, a 110-strong Mechanised Company and a 112-strong Recce Company, plus various brigade support elements; a TCAS (Tactical Close Air Support) party of officers from the Irish Air Corps was tasked with control of the French Mirage F1-CT ground attack aircraft committed to EUFOR.

A fleet of 22 Mowag Piranha IIIH wheeled personnel carriers was sent to Chad as main combat vehicles for the MNB-S. Eight Piranhas were used by the Mechanised Company, which had two platoons of four infantry section variants apiece; this version has a turret, armed with a 12.7mm machinegun and a coaxial 7.62mm machinegun. In the Heavy Weapons platoon there was also an 81mm Mortar Troop with two Hotchkiss Brandt mortars, and they too were transported in Piranha IIIH carriers. The Recce Company had a single Recce Troop equipped with four Piranha IIIH of the CRV (Combat Reconnaissance Vehicle) variant with the KONGSBERG 40mm RWS.

Although Yves visited UNIFIL in mid-2008 there were no Irish Piranha IIH personnel carriers committed to the Force at that time, but a 440-strong Irish Contingent, mostly drawn from the 104th Battalion, deployed in in mid-2011 and they took at least twelve turreted Infantry Section Vehicle and four 12.7mm RWS variants with them.

* Footnote: Yves, Carl and myself ~ often referred to by Yves as ‘The Three MustGetBeers’ even though Carl prefers cider / cidre when available ~ worked closely as a trinational, back-scratching team for over two decades until his untimely, though not really unexpected, combat zone demise and we survivors know ‘The Laughing Frog’ (he often signed postcards and letters with a hand-drawn cartoon of a hysterical amphibian) would have been pleased to see his unique documentary images living on in the pages of JOINT-FORCES.com