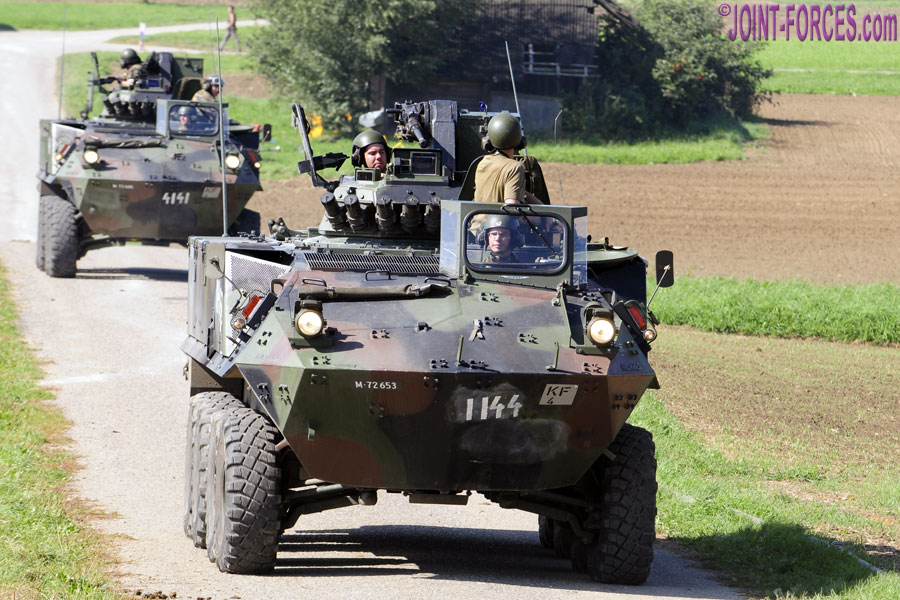 Our recent articles on Romania’s Piranha III and Piranha V prompted us to delve back into our archives for images of Piranha in Swiss service, writes Bob Morrison.

Carl Schulze had the opportunity to photograph both 6×6 Piranha II and 8×8 Piranha IIC versions used by the Swiss Army during Exercise PROTECTOR 09 and it is the latter we are focussing on in this second album.

First some background on the exercise: The Protector 09 exercise scenario was based on the impact that a fictional conflict (caused by ethnic, territorial and economic issues) between two neighbouring countries might have on Switzerland. In three northern Swiss cantons large numbers of refugees had fled over the border from the fictional Elbonia and Danubia giving cover to insurgents using Switzerland as a safe haven to conduct cross-border operations. Ethnic minorities already living on Swiss soil had taken up arms, further complicating the situation. As the civilian security forces were unable to maintain control of the situation they called on the Swiss Armed Forces for help and a Task Force was mobilised to conduct a stability operation.

Externally all three versions were and are virtually identical, though the Kdo Pz has additional antennae mounts and a rectangular armoured hatch in the left side above and slightly forward of the third axle. Two further sub-variants were produced, as modifications to the standard vehicle, in small numbers:-

¤ Driving School – with a ‘glasshouse’ structure behind the commander’s hatch to allow other students to observe.

Essentially a stretched four axle derivative of the 6×6 Piranha II, measuring 6970mm long rather than 6280mm and with relatively minimal height and slight width differences, the Swiss Piranha IIC Schützenpanzer has its engine up front on the right hand side. The driver sits forward, to the left of the engine, with the commander directly behind and the gunner is perched amidships on the centreline of the roof in a one-man KUKA turret with a 12.7mm machine gun. There are two outboard hinged rectangular roof hatches behind the turret for use by top cover troops.

Nine riflemen could be accommodated in the rear troop compartment of the standard APC, but there was only seating for seven in the Pal (anti-armour) variant to allow stowage for their M47 Dragon (PAL BB 77) missiles and launch bipods; these were decommissioned on 1st January 2008, leaving TOW missiles mounted on the 6×6 Piranha II Pzj to fill any resultant capability gap. I have been unable to confirm how many seats were fitted in the rear of the Command Vehicle, but three or four is the logical number if this variant was conventionally configured with map boards down one side.

In the next album in this series we plan to briefly look at the Piranha III 8×8 in Irish service, as photographed by our late colleague Yves Debay in Kosovo, before turning our attention to some Danish versions, as photographed by Carl and myself over the years.