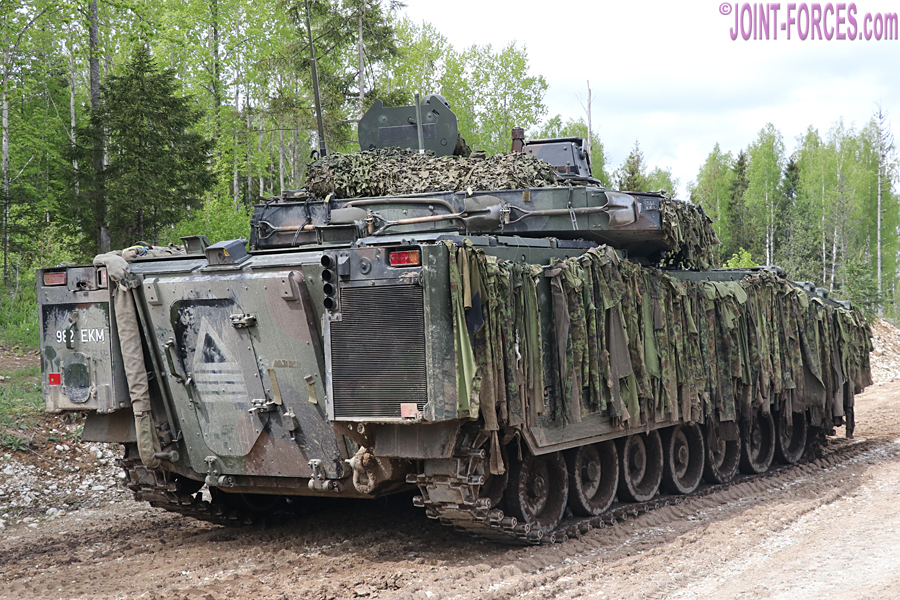 The bulk of Exercise KEVADTORM 2021 took place in Northern and Central Estonia from May 17th until June 5th, immediately preceded by and partly overlapped by the Baltic phases of the SWIFT RESPONSE and FIRES STRONG exercises; these to US-led exercises had separate phases in both the Baltics and the Balkans.

Through necessity this year’s KEVADTORM, an Estonian national and invitational training exercise programme used to validate the Estonian Defence Forces near the end of the annual training cycle, was very different from previous iterations I have covered (KT17 and KT19) as COVID-19 restrictions pretty much limited the bulk of the ground action to the Central training Area (Tapa Polygon) and its immediate surrounds. Additionally, large units from the NATO eFP Battle Groups from close neighbours Latvia and Lithuania were unable to participate this time due to peacetime travel restrictions in force in late April and early May and visiting units from Partner Nations (e.g. Finland) were unable to attend either.

However American and British JEF (Joint Expeditionary Force) Paratroopers on Exercise SWIFT RESPONSE 2021, one of the exercises linked into the US DEFENDER-Europe 21 series, flew into theatre ahead of KEVADTORM 21 formally commencing on 17th June to conduct Airborne and Air Assault operations followed by live-fire packages as part of the bigger picture. Simultaneously, German-based US Army gunners on Exercise FIRES STRONG joined British Army colleagues from the NATO eFP Battle Group Estonia for combined howitzer and MLRS live-fire packages at Tapa which further expanded the the overall exercise scenario.

While the Latvia- and Lithuania-based contingents were not able attend, both Denmark and Poland send contingents into Estonia by sealift and airlift to prove NATO’s ability to rapidly reinforce the Baltic Nations in times of crisis, and by not using the usual overland methods of providing KEVADTORM exercise reinforcements they provided additional training opportunities for the Estonian logistics operation. As the Poles were not deployed to the Central Training Area or the Tapa Garrison, both of which by now were bursting at the seams, we did not have the opportunity to cover that element of the exercise but we did have the chance to work with the Danes.

Including travel time I spent four weeks away from the JOINT-FORCES.com HQ, the longest period I have ever allowed for an individual assignment since those days long ago when I had a full head of hair, but as a result I was able to cover many different aspects of both SWIFT RESPONSE and SPRING STORM in the Baltic Region. The Estonian Defence Forces Combat Camera Teams, many of whom are Reservists, were also out on the ground to cover the action throughout May and into early June and we will be able to use their excellent images to plug the holes in my coverage.

COVID-19 precautions were to the fore throughout the exercise programmes, with most participants having been double inoculated and regular testing being undertaken to ensure the virus could not be spread. As for myself, I had both vaccinations (Pfizer) well ahead of departure for Tallinn and PCR-tested as Negative three times over the 28 days as well as regularly self-testing with RAT kits; plus I have undertaken further testing since my return and am still self-isolating because the goalposts shifted the wrong way while I was out of the country. However all the palaver has been worth it as we now have some unique content to look forward to for the website.

It is my intention to pen a series of articles on the three exercises in Estonia, slightly out of sync to reflect the big picture which the planners were trying to create with their hands tied by the lack of available space for the units to manoeuvre across this year. In part one I will most likely look at Estonia’s 2nd Infantry Brigade, and primarily the 22nd Infantry Battalion, who provided the bulk (but by no means all) of the OpFor or Yellow Force ‘enemy’ which the 1st [Estonian] Infantry Brigade with the NATO eFP Battle Group under its command were tasked with first blocking and then overcoming.