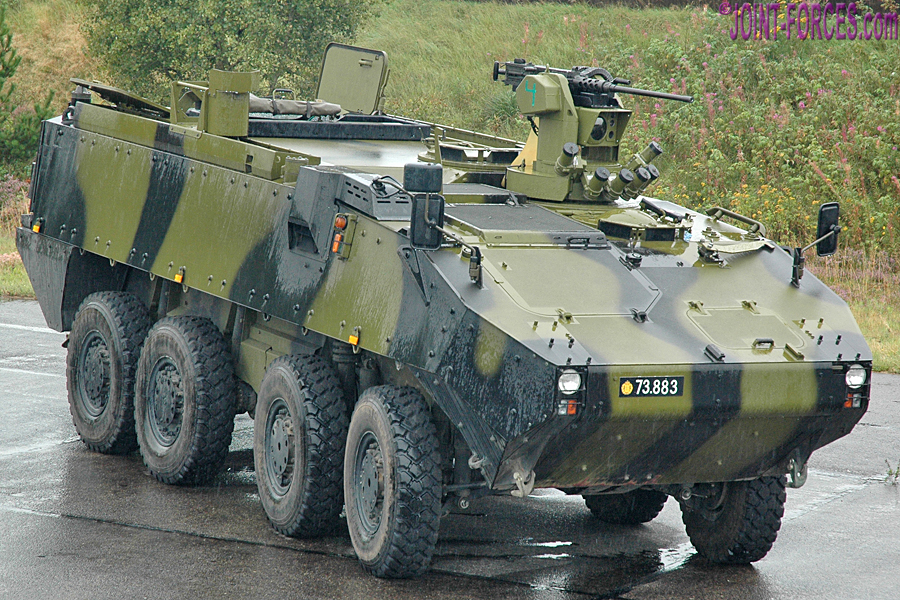 Continuing with the Mowag Piranha theme, Carl and myself have now gone back into our archives to find images of Piranhas in Danish service, writes Bob Morrison.

Denmark was the first foreign nation to procure and accept for service the Mowag (now GDELS-Mowag) Piranha III, ordering a batch of 22 of the IIIH model in December 1997 and subsequently ordering over 100 (sources give varying totals) of the later IIIC model in several variants.

We first encountered some of the initial batch of Danish Piranha IIIH armoured personnel carriers during the CRO (Crisis Response Operation) phase of the NATO multinational Exercise STRONG RESOLVE 2002 (SR-02) on Drawsko Pomorskie Training Area in Poland. SR-02 was effectively a massive peace-enforcing exercise, spread over three major Polish training areas plus airfields and a port, where participating troops from NATO and PfP (Partnership for Peace) nations worked together in a scenario which to some mimicked that of the Former Yugoslavia; incidentally Denmark deployed around half of its then brand new Piranha IIIH fleet to Kosovo for KFOR service in 2001. In addition to Armoured Personnel Carriers, Denmark also bought two Armoured Command Post and two Armoured Recovery Vehicle variants in the first IIIH batch, allowing it to deploy two infantry companies independently.

The Danish Piranha IIIH version was powered by the German MTU 6V182 TE22 diesel engine, which gave it a road speed of 105km/hr, but when the later IIIC version was procured it was powered by the American Caterpillar C9 diesel engine which offered a 5km/hr lower top speed but increased range and was environmentally more friendly as it met Euro III requirements. The easiest way of differentiating between IIIH and IIIC models from the front or sides is the different shaped nose and the incorporation of the headlights within the body rather than being perched atop the glacis plate. The fuel tanks behind the rear wheels are also more angular on the IIIH model.

In addition to its crew of three a Danish Piranha III APC, of either version, can transport an eight-man infantry section plus their weapons and rucksacks. When the IIIC was introduced, both Armoured Ambulance and Communications & Information Systems versions were introduced in addition to APC, ACP and ARV variants. The ambulance version, which can seat ten ambulatory patients or carry two stretcher casualties (or five plus one) in addition to a medic, has a slightly higher rear compartment. The command post and communications variants have a much higher and boxier rear compartment plus rectangular extending antennae mounts.

Piranha III is currently being replaced by Piranha V in Danish service.

In our next Piranha album I plan look at Belgian Piranha III variants, including the very rare Air Defence version.