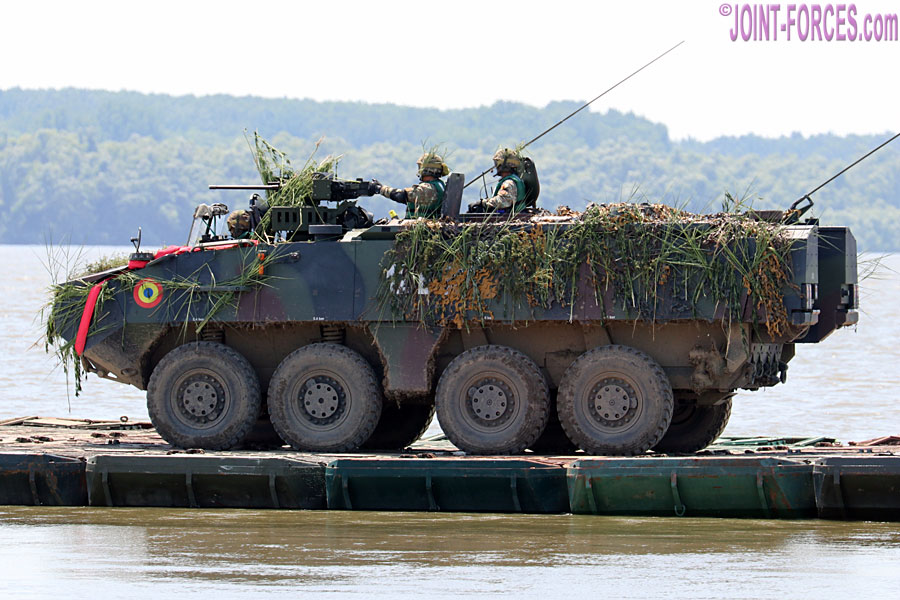 The wet gap crossing phase of the NATO multinational Exercise SABER GUARDIAN 19, at Bordușani on the River Danube, provided the opportunity for us to photograph some of these vehicles; originally procured for ISAF duties in Afghanistan as they offered better protection than the ageing licence-built TAB Zimbru B33 version of the Soviet BTR-80 originally deployed.

The standard Romanian Piranha III personnel carriers are amphibious, with unshrouded propellers and twin rudders each side at the rear, as well as a bow wave panel which is raised for swimming but lowered for driving; this ability is a necessity for the vast Danube Delta region, where bridges are few and far between. The Piranhas have a Remote Weapon Station with 12.7mm machine gun for self-defence and banks of triple smoke dischargers on each side of the hull roof above the rear wheel station. Crew is three – commander, driver and gunner – and up to seven dismounts can be transported; access and egress is by either a single piece ramp or a small rear door and roof hatches allow top cover when patrolling.

The Piranha III is a derivative of the original Swiss MOWAG Piranha 6×6, which evolved into both the Canadian Army and US Marine Corps LAV (Light Armoured Vehicle) families and later into the US Army Stryker. Other users of the Piranha III are the Belgian, Danish, Irish, Swedish and Swiss Armies plus Brazilian and Spanish Marines (we plan to assemble a separate album on Belgian and Irish vehicles in due course). MOWAG is now a subsidiary of GDELS (General Dynamics European Land Systems) along with Santa Bárbara Sistemas of Spain and Steyr of Austria.