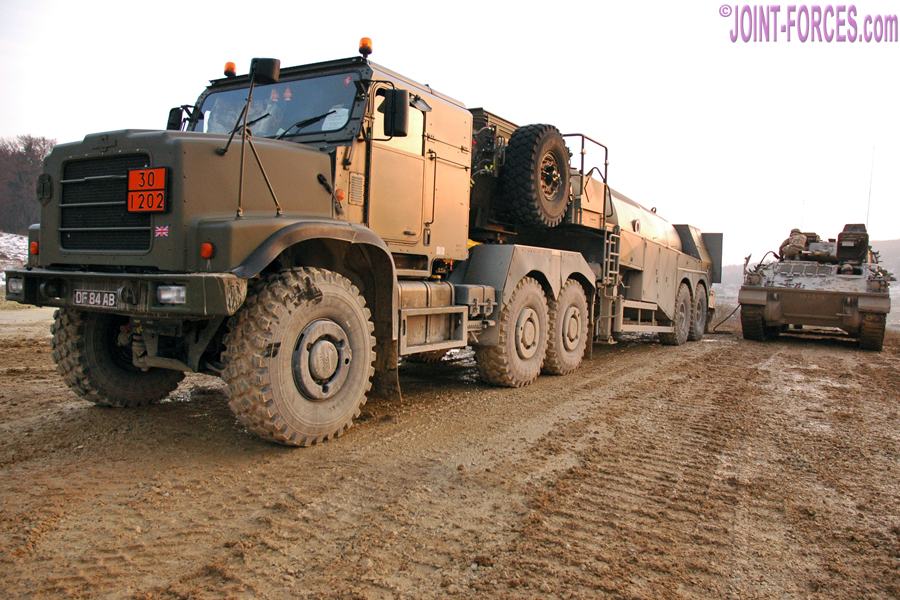 A Close Support Tanker in use as mobile fuel station topping up an FV510 Warrior Mechanised Combat Vehicle during the Mission Rehearsal Exercise for Operation TELIC 12 at the US Army JMRC in Germany, April 2008 [©Carl Schulze]

In this mini-series we look back at the now mostly over fifteen years old and well-travelled fleet of Oshkosh Tankers used by UK Armed Forces, writes Carl Schulze.

A key to the success of military operations is the timely delivery of supplies to units deployed on operations. Due to the fact that modern forces like Britain’s are motorised to a high degree, one of the key supplies they require is fuel… a large quantity of fuel.

Just to give some examples: a Challenger 2 main battle tank of the British Army driven cross-country has an average fuel consumption of 610 litres per 100km. The fuel tanks of a Chinook HC 2 transport helicopter of the Royal Air Force can hold 3,917 litre of fuel, when fully loaded with 10 tonnes of cargo this allows the helicopter to operate in a radius of just approximately 90 km. Right after fuel in the range of the most needed supplies follows drinking and domestic water. Within the Royal Logistic Corps units of the British Army and the Tactical Supply Wing of the Royal Air Force the fleet of Wheeled Tankers manufactured by the Oshkosh Truck Corporation (now just Oshkosh Corporation) is employed for transporting bulk fuel and water in order to deliver the needed liquids to the units in the field.

In addition to bulk fuel transporter, the programme now also included the requirement for a bulk water transporter. While it was planned to procure an initial number of some 430 Wheeled Tankers there was the chance that this number could well rise to some 750 vehicles if funds could be allocated. While initially three groups of manufacturers were bidding for the contract, one of these led by Volvo withdrew from the programme in 2001.

Contract and Contractors: On the 10th January 2003 the Oshkosh Truck Cooperation announced that it had been selected by the Ministry of the Defence as the preferred bidder for supplying the new Wheeled Tankers. By then the only other competitor that remained was a team led by Marshall Specialist Vehicles Limited. Three month later, on the 1st of April 2003, the Oshkosh Truck Cooperation and the Ministry of Defence signed a production contract with a value of £160 Million.

Initially the production of 348 Wheeled Tankers was planned, comprising three different variants; however a contract option was exercised at a later point. Under this an additional nine Wheeled Tankers were procured. The initial contract also included a support package that covered the delivery of a spare parts package, publications, special tools, test equipment and 15 years of through life support. The vehicles were delivered with a five year parts and labour warranty as well as with a five year reliability warranty with a 3% threshold.

While the Oshkosh Truck Corporation in Wisconsin in the United States served as the main contractor, most of the construction work was in fact carried out in Europe. Oshkosh Truck Corporation only manufactured the Wheeled Tanker Tractors with part of the construction work being carried out by Oshkosh UK Limited in its production plant in Llantrisant in Wales. Alfons Haar, a well known manufacturer of pumping equipment, based in Hamburg in Germany, provided the pumping modules. The medium mobility tanker semi-trailers were built by the French company Magyar SA in its production facility in Fontaine-Francaise.

The integration of the pumping systems in the tanker-semi trailer as well as final assembly and testing was conducted by ABRO (Army Base Repair Organisation, later the Defence Support Group) in Warminster in the UK. After passing their ADR dangerous goods vehicle certification, issued to them after testing by the Vehicle Operator Service Agency, the vehicles were delivered to the vehicle storage site of the Defence Storage and Distribution Agency at Ashchurch. From here they were distributed to those units of the Royal Air Force and British Army that would field them.