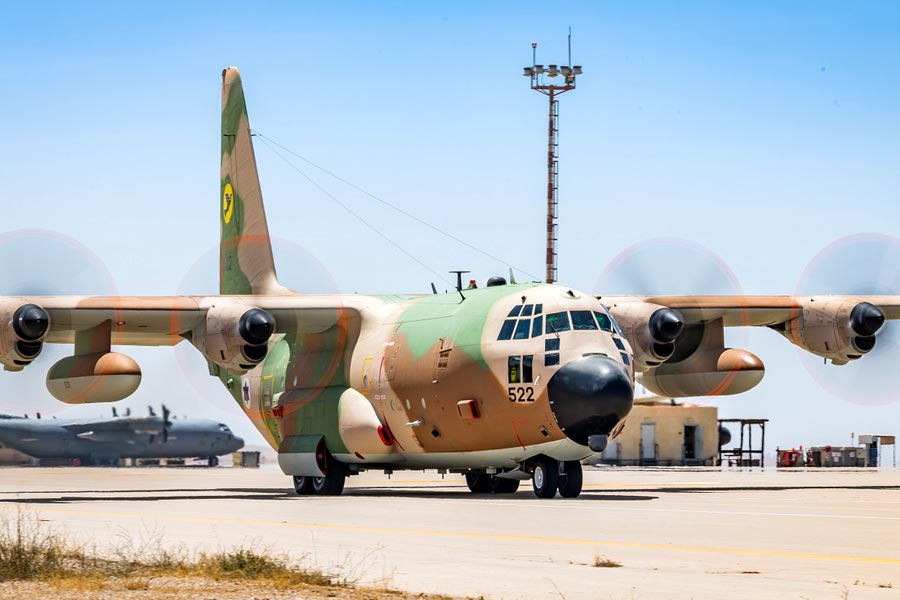 The Israeli Air Force has declared completion of its Hercules C-130HI modernisation programme in conjunction with Elbit Systems and IAI.

The following article, penned by Ohav Turgeman of the IAF (Israeli Air Force) illustrated with photographs by Amit Agronov and published yesterday, was forwarded to JOINT-FORCES.com by Elbit Systems:-

The 131st ‘Yellow Bird’ Squadron is wrapping up the avionic enhancement process for its ‘Karnaf‘ Hercules C-130HI, which began several years ago. The upgraded transport planes are not the same as they were in the past, the squadron says.

What changes were made to the heavy transport planes? The idea of putting the Karnaf Hercules C-130HI through an avionic enhancement process first came up in discussions at the IAF HQ in February 2008. When the time came to renew the planes, which have been part of the IAF’s fleet since the early 1970s, some were replaced by the ‘Shimshon‘ Super Hercules C-130J and the rest underwent avionic enhancement that entailed the implementation of new systems. The first Karnaf began the process in 2015, with Elbit Systems responsible for avionics and The IAI (Israeli Aerospace Industries) for maintenance and replacing the central wing.

Balancing Enhancement with Operational Activity: The squadron was required to continue carrying out its missions throughout the entire upgrade process, which is a challenging feat. “We couldn’t take a break from our operational activity. The Karnaf is used for many tactical transport missions such as transporting equipment, low-altitude flights, and refuelling CH-53 helicopters – a task that is unique to our squadron”, described Lt Col (Res) A, former 131st Squadron Commander. “Concurrent to the enhancement process, the 103rd ‘Elephants’ Squadron was closed to integrate the new Shimshon aircraft, so the majority of their heavy transport missions were given to us”.

In 2017, the 131st Squadron divided into two departments – one operated the old Karnaf planes, while the other focused on accommodating the squadron for the new Avionic Karnaf. “The squadron took a two week break in order to prepare and create an integration team that will adapt the flight doctrine to the new platform”, said Lt Col (Res) A.

A few years later, the 131st Squadron finished enhancing eight Karnaf aircraft at Elbit Systems, in an entirely Israeli process. “It was a complex project – taking a Karnaf that has been operational for nearly half a century, and introducing it to a new generation. We managed to combine past with future, while maintaining the squadron’s strong heritage. The process required rigorous planning and a combination of several professional fields”, said Maj Mordi, commander of the transport plane department at the Nevatim maintenance squadron. “Throughout the entire period, we received feedback from the aircrews and continued to improve”.

Cutting Edge: So what exactly makes the avionic Karnaf such a new and advanced platform? Lt Y, an aircrew member in the squadron said: “The old Karnaf couldn’t meet the required missions and challenges that face aircrews in 2021. Thus, many new functions were added to the flight platform to enable the aircrews to operate safely and efficiently. The cockpit underwent a complete makeover and turned into a ‘glass cockpit’ – the old systems that display essential information such as flight path, engine status, radar, weather conditions and more, were replaced with new cutting edge screens. In addition, a Head-up display (HUD) similar to that of fighter jets was added. The HUD is a glass board that displays the flight information in the pilot’s direct viewpoint”.

The enhancement is not only an avionic process but also a mechanical one. “In some aircraft, the central wing was replaced which doesn’t happen often. There are still 45-year-old parts in the planes, but they constantly undergo comprehensive maintenance that increases the C-130’s lifespan”, shared Lt Col (Res) A., and Maj A., the 131st Squadron’s Technical Officer, adds: “The enhancement process has brought the Karnaf, a senior flight platform, to the cutting-edge of technology. It became an advanced aircraft equipped with unique and tactical transport capabilities, suited to the challenges of our operational arena”.

Safer, More Efficient: The enchantment process had a great impact on the 131st Squadron and the IAF’s Heavy Transport Division as a whole. “Currently, flight data is displayed in a very visually appealing way. The pilot can adjust the data display to the relevant scenario optimally through versatile settings. Additionally, we have systems that enable information sharing between different aircraft in a joint formation – I could send flight paths and potential threats to my wingman, and the navigator flying with me could also transfer data to my screen”, details Capt Y.

“Also, the HUD improves flight safety since we can see at data mid-flight without looking away”, detailed Capt Y. “Similarly, our weather radar enables us to perform missions in tougher conditions than before. The new upgrades allow for more effective night and low-altitude flying. The enhancement process also led to shorter training programs in the squadron and faster flight certification. Now, due to simpler avionics, younger pilots can perform missions that only veteran ones could perform previously”.

“The 131st squadron combines the past, present, and future, history with legacy, a veteran aircraft with advanced Israeli technology. This enhancement process took an excellent plane and made it even better – in operational capabilities, precision, flight safety, and potential. This unique and complex project was done successfully through excellent cooperation between Elbit Systems, the IAI (Israel Aerospace Industries), and various IAF factors”, concluded Lt Col Y, the current Commander of the 131st Squadron. The refurbished C-130 performed a myriad of missions across the globe, from India to Alaska. The squadron is fully prepared for future challenges with quality aircraft and personnel”.