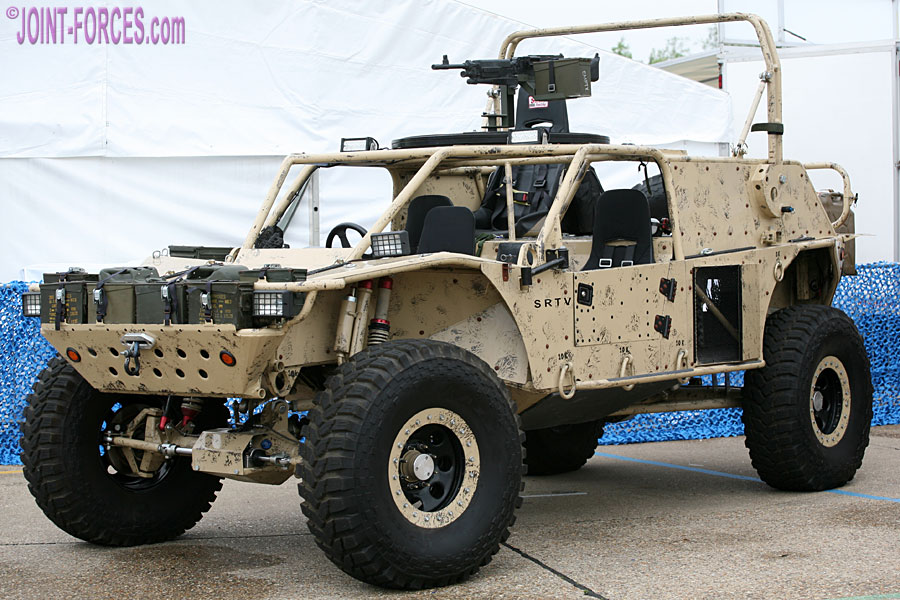 Often while I am researching a feature and ferreting through my photo archive, which in digital format goes back two decades and on film over three, I get drawn off on a tangent when I chance upon a different but associated subject which I snapped ‘for the record’ in the distant past.

At the moment I am working on a feature on the current US Airborne A-GMV (Army – Ground Mobility Vehicle) 1.1, a derivative of a turn of the millennium Flyer Defense Light Strike Vehicle, and when I was searching through my archive for a photo of the prototype Flyer at an early DVD (Defence Vehicle Dynamics) expo I found a series of snaps of a prototype HDT Storm SRTV taken in the UK. So off I went on yet another tangent!

The Storm SRTV (Search & Rescue Tactical Vehicle ) was originally designed around 2004 by Utah-based BC Customs, from a commercial space-frame off-road race buggy design. In response to specific US Special Operation Forces requirements, size and configuration were expanded and the first example SRTV version was ordered in late 2007 by the US Air Force for evaluation in the Pararescue role. By 2012 HDT Global, a well-established Ohio-based manufacturer and supplier working on the defence side primarily in the Integrated Base Camp and Integrated Expeditionary Collective Protection solutions fields, but which also produces specialist lightweight and robotic vehicles, became involved. In January 2013, two prototypes of what was now being called the HDT Storm SRTV were procured as the GAARV or Guardian Angel Air-deliverable Recovery Vehicle; Guardian Angels is the nickname for US Pararescue specialists tasked with the recovery of downed aircrew from behind enemy lines. Incidentally, a smaller and lighter sibling, the HDT Sword ITV (Internally Transportable Vehicle) was also produced in conjunction with US Air Force Special Operations who required a vehicle capable of being transported inside a CV-22 Osprey, but that is possibly another topic.

The Storm prototype displayed at DVD 2013, around five months before the US Air Force 88th Test and Evaluations Squadron took delivery of their initial set of Guardian Angel Air-Deployable Rescue Vehicles for operational testing, is not quite identical but was still pretty close to the USAF specification. According to Worthing-based engineering consultants Ricardo, who displayed it on their outdoor stand, the British company was working with HDT “to develop an operationally focused light role platform.” Ricardo’s roles were: UK/European Systems integration and manufacturing; ongoing development of engine and power generation; and through-life support and post-design services. There was no indication of who Ricardo’s potential client could have been… though at the time some observers put two and two together.

This SpecOps version of the Storm SRTV had primary seating for three plus a rudimentary central travel seat in the rear for the top gunner, as well as two jump seats on the cargo bed above the engine compartment towards the rear. Although not fitted on the Millbrook vehicle, a stretcher (litter) rack could be mounted on the load bed and in this configuration ‘Guardian Angels’ sitting on the jump seats could attend to injured aircrew. Alternatively, the vehicle could be speedily reconfigured to carry two or even three stretchers inside the DROPS (Demountable Roll-Over Protection System) frame.

The latest company specification sheet for the Storm SRV gives its dimensions as being 4318x 1518x 1505mm high to top of DROPS cage when stripped down and 4978x 1518x 1613mm high in travel configuration with spare wheel and front bumper. The 230hp 3.0-litre turbo-charged and inter-cooled diesel engine, positioned towards the rear and over the back axle, gives a top road speed in excess of 137km/hr (85mph) through a 3F1R automatic gearbox with high and low ratios and selectable 4×2 or 4×4 transmission. Approach, Departure and Ramp-over Angles for the 3050mm (120”) wheelbase vehicle are 90°, 75° and 116° respectively, with 380mm (15”) Ground Clearance and 455mm (18”) vertical step capability. Finally the GVW weighs 3629kg (8,000lb) of which almost half is available for payload.

I have not, at time of writing, been able to determine how many examples of the GAARV were eventually procured and I suspect its role might have been taken on by other, slightly later, vehicles ordered by US SOCOM. For example the UK-based USAF 352nd Special Operations Wing has confirmed to us that their operators use the smaller MRZR but has not been able to confirm if they also have the GAARV on their inventory. Official images of these vehicles in service are not particularly easy to find, but it is a matter of public record that 212th Rescue Squadron, 176th Wing, Alaska Air National Guard has air-deployed GAARV to provide Humanitarian Assistance in Florida as late as September 2018.