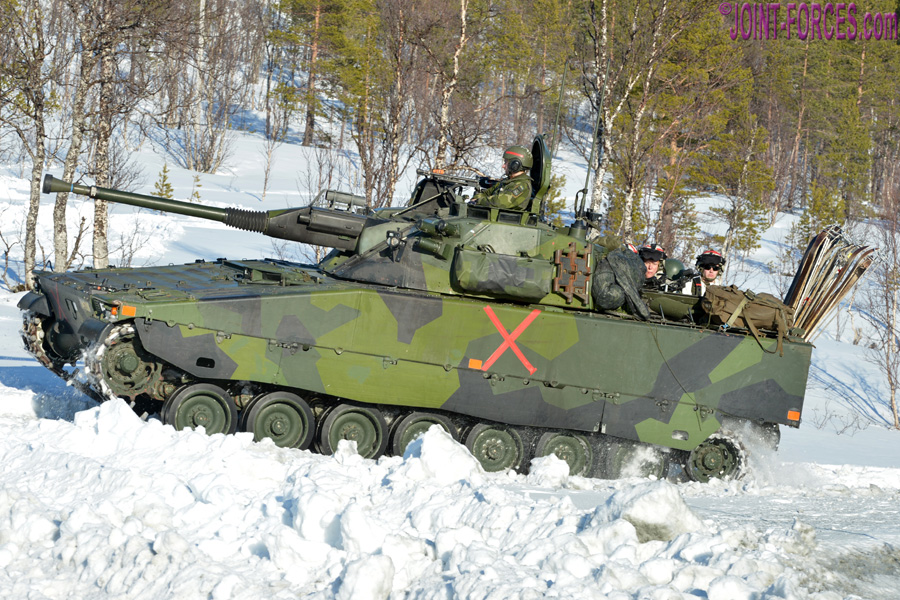 As Exercise COLD RESPONSE 2022 concludes in Norway, we bring you an overview of the largest post-COVID exercise involving NATO troops, writes Bob Morrison.

Run primarily from 7th until 31st March, COLD RESPONSE 2022 or CR22 was a Norwegian-led Invitational Exercise with more than 30,000 military personnel from 27 countries taking part. Most participants were from the NATO Alliance but PfP (Partnership for Peace) members Finland and Sweden also sent sizeable contingents to Norway.

Each year the Norwegian Armed Forces (Forsvaret) organise winter training exercises for their own personnel and since 2006 on even years they have invited foreign participants under the COLD RESPONSE banner; however the 2020 invitational exercise was cancelled because of the COVID pandemic, as was the 2021 national winter exercise. For 2022, even though the pandemic was receding or under control across much of Europe, Forsvaret and NATO implemented measures to ensure that allied training in Norway was carried out safely and without spreading the virus.

Norway, as well as being centrally located in the strategically important Arctic Region, has vast maritime and land areas (much of the latter being comparatively sparsely populated) which are ideal for military exercises. Additionally, the country’s tough landscape, long coastline pierced by narrow fjords and rugged mountains, not to mention its cold and wet climate, provide exercising troops and forces with unique challenges. The Norwegians have the knowledge and experience to operate under harsh winter conditions and are happy to share this knowledge with their NATO allies and PfP partners, as both my colleague Carl and I can confirm having each covered several military exercises in Northern Norway for over 30 years.

This year the roughly 14,000 ground troops, 8,000 sailors and marines, and 8,000 air force personnel and staff officers who participated on COLD RESPONSE operated across the length of south-eastern, central and northern Norway, as well as in the air and at sea; over 200 military aircraft and fifty naval ships also took part in the various exercise phases. For those unaware of the terrain in Northern Norway, which shares a near 200 kilometre remote border with the Russian Federation, for around 1,500km north of Trondheim the nation’s mountainous terrain is seldom more than 100km wide between the sea and the Swedish border, at times barely a quarter of that distance, and it is riven by countless fjord and lake obstacles. The only main lines of communication north of Trondheim are the strategic E6 highway and, for the first 700km or so to Bodo, the Norland Line railway track; naturally the former has to be well defended, but it also presents serious challenges to land force movements by the defender.

The overall exercise could be broken down into three distinct parts, though we are really only concerning ourself with the third and final of these. Phase 1 of CR22, ‘Command of the Sea’, ensured that in case needed the country’s Allies were able to deploy reinforcements to Norway. Phase 2, ‘Air Operations’, ensured the Allied deployment was protected while Norwegian troops secured important hubs for their reception; additionally, the Norwegian ‘total defence’ cooperative effort, involving civilian organisations and infrastructure in partnership with the military, prepared for the RSOI (Reception, Staging, Onward Movement and Integration) of allied troops and materiel. Multinational Special Forces operations also took place in North Norway (northern Nordland and southern Troms) between the 14th and 18th.

Phase 3, ‘Amphibious and Land Operations’, mostly took place in northern Nordland County and in the southern and inner region of Troms District, with a LIVEX phase running between 23rd and 31st March. Those military activities north of Narvik were designated as being in JOA (Joint Operations Area) North with a Norwegian-led multinational (NOR / FIN / SWE / ITA / GER) Red Forces Task Group (also called North Force and formed around Norway’s Bardufoss-based Brigade Nord) defending against three invading, mostly amphibious, multinational (Blue Forces) Task Groups. The invading forces in JOA North were predominantly from the Dutch, French, Italian and US Marines.

Although JOA North and JOA South were around 1,200 kilometres apart, they were mutually supportive and operated under the same over-arching headquarters to ensure maximum training benefit for participating Host Nation troops drawn from the length of the country. As far as we can determine the visiting CR22 participants came from Belgium, Canada, Czech Republic, Croatia, Denmark, Estonia, Finland, France, Germany, Greece, Hungary, Italy, Latvia, Lithuania, Montenegro, Netherlands, North Macedonia, Poland, Romania, Slovenia, Spain, Sweden, Turkey, United Kingdom and United States; Iceland was probably the 26th nation, with Norway itself being the 27th.

Although unfortunately media were unable to cover this aspect, multinational Special Forces training operations also took place in Northern Norway (northern Nordland and southern Troms) between the 14th and 18th of March.

By late on Wednesday 30th March, with most if not all exercise goals having been achieved, COLD RESPONSE 2022 commenced the redeployment phase and JOINT-FORCES got ready to depart theatre to start preparing for the next assignment (which Carl hopes to be able report back on late tomorrow, Saturday 2nd June).

Footnote: To try to provide as much coverage of this massive multinational exercise as our limited resources allow, rather than both Carl and myself duplicating efforts (as happened on TRIDENT JUNCTURE 18 in Norway) we decided to split up with my much younger and fitter colleague taking on the Amphibious Landings and the LIVEX phases, while I made myself available to cover the Royal Navy and Royal Marines side plus the NATO Response Force (i.e. BRJU22) media facility. Unfortunately, even though I registered our interest with the Navy in early January, no UK MoD media facilities were forthcoming so rather than sucking my thumb I headed off for a few days at WDS 2022 in Riyadh before flying up to Gardermoen to cover the BRILLIANT JUMP 2022 DV Day facility up in Rena while Carl was packing his bergen in Germany to join Phase 3. According to the UK MoD “around 900 Royal Marines have been deployed to the Arctic since January in preparation for the exercises” but we are unsure how many actually took part in Phase 3 of CR22, though Carl did visually confirm that the Royal Navy’s 845 NAS were operating out of Bardufoss.

COLD RESPONSE 2022, CR22, Featured, Norway
You may also like