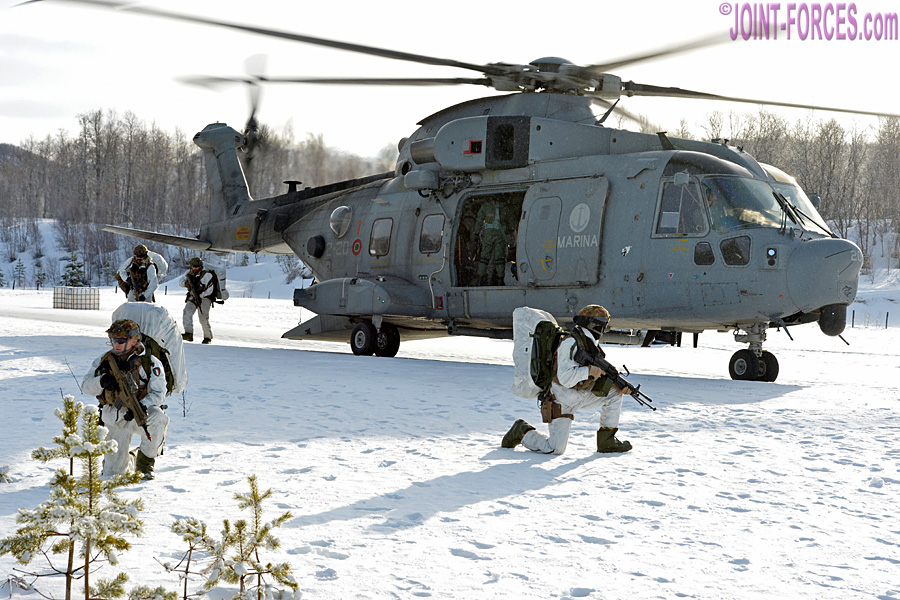 Today Italian Marines of the Brigata Marina San Marco, supported by aviation assets of the United States Marine Corps, conducted a heliborne assault operation in the vicinity of Elvevoll of with the aim seizing key terrain for follow-on operations.

08:35, 24 March 2022, Elvevoll. At high speed and at quite low level, the two MH-101A amphibious support helicopters approach the NMK Dyroy cart racing course. Seconds later, the light grey painted aircraft disappear in clouds of snow, swirled up by the downwash of their rotors. When the clouds finally settle, Italian Marines of the 1° Reggimento, Brigata Marina San Marco can be seen rushing out of the rear of the helicopters and taking cover at the edge of a nearby forest.

While the MH-101A helicopters of the Italian Navy are on the ground overwatch is provided by an AH-1Z Viper attack helicopter and an UH-1Y Venom utility helicopter of the II Marine Expeditionary Force (II MEF) of the United States Marine Corps. Again and again the two USMC aircraft attack positions of troops of the North Force, situated in the area. They also engage with enemy forces that try to counter-attack the landing Marines.

The 1° Reggimento of the elite Brigata Marina San Marco is based outside Brindisi and specialised in amphibious and heliborne operations. Being part of the Italian Navy, the brigade in total consists of three regiments. However, 1° Reggimento is the brigade’s only amphibious infantry asset, while the other two feature different tasks such as providing security for Italian naval bases and conducting boarding operations in order to enforce embargoes. The 1° Reggimento consists of two battalions of Marines and a logistic support battalion, but only parts of the regiment are participating in Exercise COLD RESPONSE 2022. For the duration of CR22 the San Marco Marines are operating from on board the Italian aircraft carrier Giuseppe Garibaldi. The carrier is the first through-deck aviation ship ever built for the Italian Navy and the first Italian ship built to operate fixed-wing aircraft. It was also on board the carrier where the Marines boarded the MH-101A amphibious support helicopters that deployed them to Elvevoll.