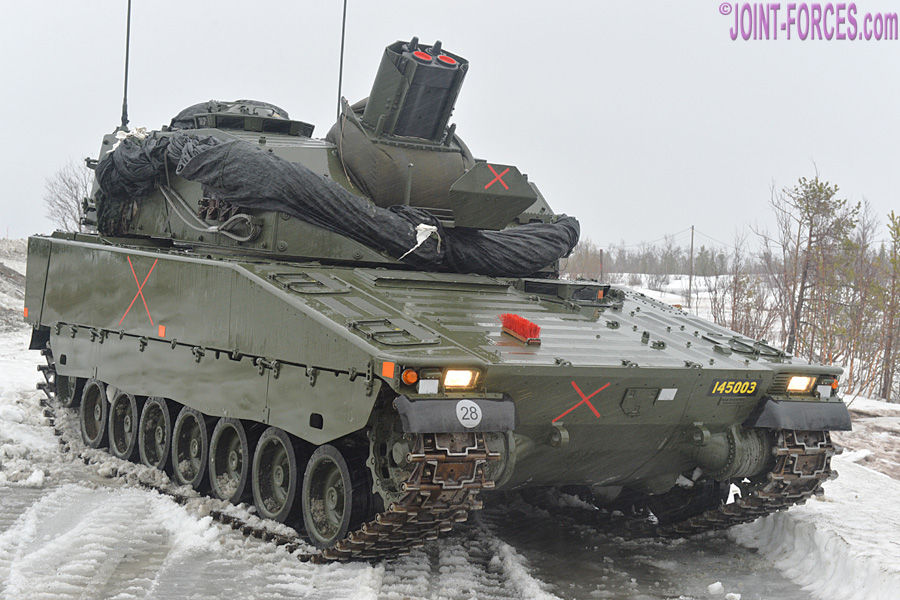 Slowly, the Finish Leopard 2A4FIN moves out from cover then the vehicle’s gunner can clearly see his target, a Norwegian CV9030N Mk III. Within seconds he is engaging the enemy armoured infantry fighting vehicle with the main battle tank’s 120mm L44 smoothbore tank gun. That the gunner has hit his target is now indicated by flashing bright lights, sported by the BT46 duel simulation system on the AIFV. Quickly, the Leopard 2A4 reverses into cover again in order to deploy to another position along the E10 highway, from which it again can engage the enemy.

The Leopard 2A4 belongs to a Finnish tank platoon that supports a Swedish armoured infantry company, of the Norrbottens Regemente I19, equipped with the CV9040B AIFV. To the west of Bjerkvik, this company fights a skilful delaying battle against advancing Norwegian armour and US Marines. Again and again the delaying formation forces the attackers to deploy dismounted troops, in order to outflank well chosen positions. A time-consuming and fatiguing procedure that hampers the advance of the troops of the South Force.

Things are made worse for the dismounts by well-aimed mortar fire that also takes its toll among the attackers. Indirect fire support for the Swedish company is provided by two CV90 Mjölner Mortar Systems. Based on the same chassis as the CV9040B AIFV, this quite new Mjölner system features a twin barrel 120mm automatic mortar system that can fire up to 16 rounds per minute out to an effective range of 13km.