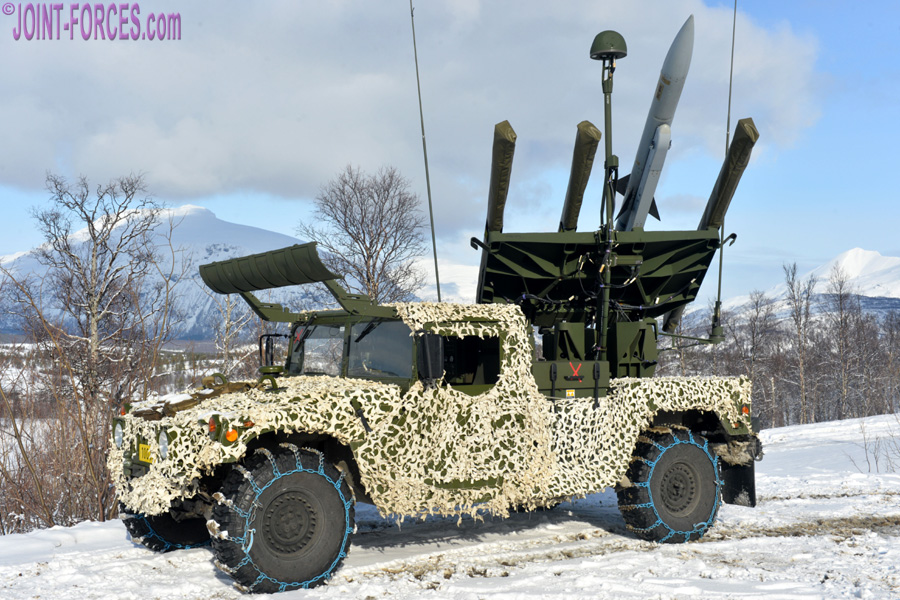 NASAMS III is the only ground based air defence system fielded by the Norwegian Armed Forces, and until recently was only fielded by the Norwegian Air Force. A standard NASAMS 3 comprises of the Command Post, the Fire Distribution Centre (FDC), an active 3D AN/MPQ-64F1 Sentinel radar, a passive electro-optical and infrared sensor and a number of palletised missile canister launchers that contain AIM-120 Advanced Medium Range Air-to-Air Missiles (AMRAAM). These palletised missile canister launchers are made mobile by loading onto Scania trucks but have to be dismounted before they can perform their task.

With the High Mobility Launcher (HML) a more mobile, quick-reaction, easily deployable solution to deploy the missile launchers was developed. The HML can even be airlifted by a C-130 Hercules transport aircraft. The development contract for the HML was issued to the Raytheon Company, and its Norwegian partner Kongsberg, in December 2011. First series production HMLs were finally fielded by the Norwegian Air Force in 2018 and by the newly stood up Kampluftvernbatteriet (air defence battery) of the Artilleribataljonen (artillery battalion) of the Norwegian Army Brigade Nord in February 2022. In March the Army launchers deployed for the first time on a large scale exercise, COLD RESPONSE 2022.

The HML is based on the M1152 Expanded Capacity HMMWV. On the cargo bed of the vehicle is mounted the Missile Support Platform on which the launcher itself, with its electric traverse and elevation gear and four launch rails for AMRAAM missiles, is installed. For power supply the MSP features its own battery set; the batteries are charged by the vehicle’s alternator. The launcher is operated by the Launcher Control Terminal (LCT). While the launcher can be fired by the crew, utilising the LCT, this is an emergency option only. Under standard operational procedures an engagement would be conducted remotely by the Fire Distribution Centre (FDC), which could be situated up to 20 kilometres distant from the HML and to which the 3D AN/MPQ-64F1 Sentinel radar and the other HML vehicles of the unit would be linked.