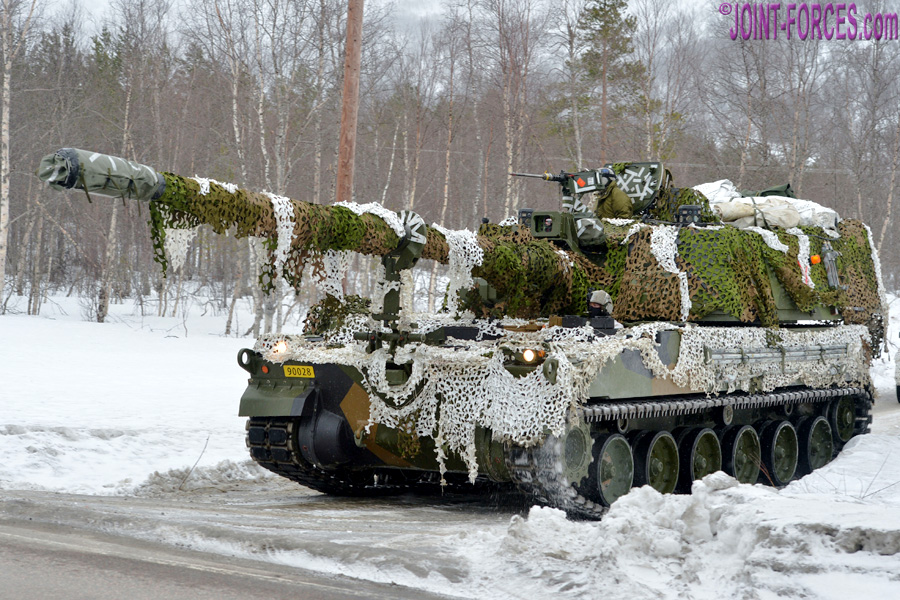 The 155mm K9 Vidar self-propelled howitzers is the main weapon system of the gun batteries of the Artilleribataljonen, the only artillery unit of the Norwegian Army [© Carl Schulze]

Setermoen, 30 March 2022: Today the North Force continued with its counter-attack, the main fighting taking place on the Setermoen Training Area with the counter-attack supported by artillery fire from the batteries of the Artilleribataljonen of the Norwegian Brigade Nord. This battalion fields the brand-new 155mm L/52 K9 Vidar self-propelled howitzer.

The four 155mm K9 Vidar self-propelled howitzers of the Kanonbatteriene Nils (gun battery Nils) are lined up on a large truck parking area on the outskirts of Setermoen. To the side of them a K10 ammunition resupply vehicle is parked. Next to a garage, the command post vehicle of the battery is situated. Suddenly, the guns of all four K9s are raised simultaneously, while the turrets are turned slightly to the right. The movement is an indication that the battery is just about to perform a fire mission. If live-firing, several extremely loud crashes would now follow but as this is an exercise the battery stays silent.

The Setermoen based Artilleribataljonen of the Brigade Nord is the only artillery unit of the Norwegian Army. It consists of the Bataljonsstaben (battalion headquarters), the Stabsbatteriet (headquarters battery), three Kanonbatteriene (gun batteries) ~ designated Nils (N), Olga (O) and Piraya (P) ~ the Lokaliseringsbatteriets (artillery reconnaissance battery) and the Kampluftvernbatteriet (air defence battery).

The gun batteries are all equipped with the 155mm L/52 K9 Vidar self propelled howitzer. Only recently this modern weapon system replaced outdated M109A3GN. Norway procured a total of 24 K9 howitzers, as well as six K10 resupply vehicles. The vehicles were designed and built by the South Korean company Hanwha Land Systems. Delivery of the first K9s took place in 2019, with the remainder being delivered in 2020 and 2021. On 1st January 2022 the Norwegian Army declared the 155mm L/52 K9 Vidar self propelled howitzers to be fully operational.

Weighting about 48 tonnes the K9 is 12.0m long, 3.4m wide and 3.5m high and features a crew of four. Powered by an MTU 881 Ka 500 diesel engine that develops 1000hp, the gun can reach a top speed of 67km/h. The engine is connected to a Allison X1100-5A3 transmission. On board the vehicle carries 44 projectiles of 155mm ammunition. With its 155mm L/52 gun it can perform multiple round simultaneous entry missions and fire bursts of three rounds in ten seconds. It also can fire for a period of three minutes at a rate of six to eight rounds per minute. However, the sustained fire rate of the gun is two to three rounds per minute for one hour. While the effective range depends on the type of ammunition used, 40 km and above can be achieved, and the gun can fire all standard NATO 155mm ammunition. The K9 can perform ‘shoot and scoot’ missions, from the move to being ready to fire the gun only needs 60 seconds, and after the fire mission is completed it can be on the move again within 30 seconds.

The Norwegian K9 Vidar differs in some details from the Korean K9 Thunder. For example it is fitted with a combined NBC protection and air conditioning system which is situated at the rear of the turret on the right side.