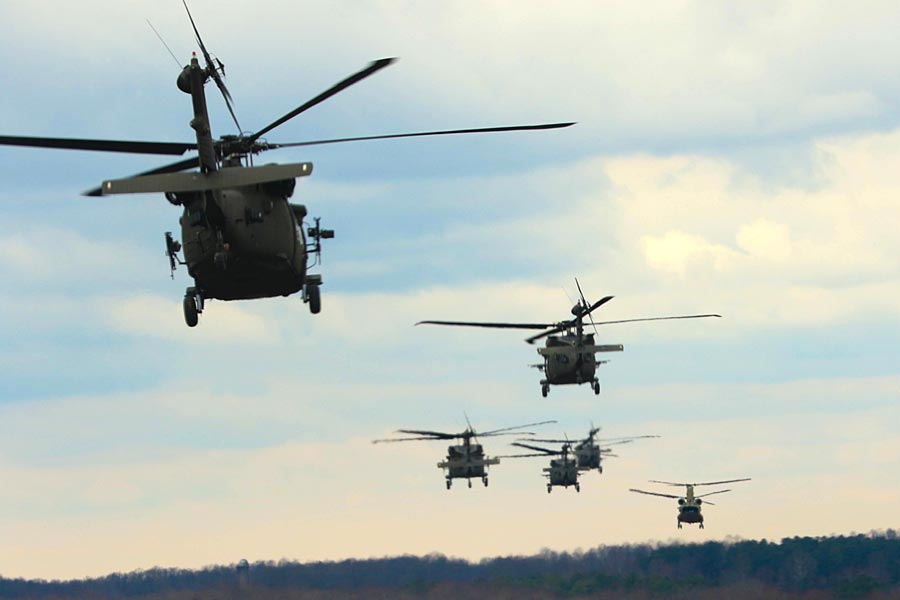 This weekend the helicopters of the US 101st Airborne Division Combat Aviation Brigade are being prepared for a 3000km flight from France to Latvia, writes Bob Morrison.

Once berthed, more than 60 of the helicopters on board were unloaded over the following 48 hours and reassembled in the port prior to departure from Monday (13th) on what for some will be a 3,000km flight over France, Germany, Poland, Lithuania and Latvia to training areas in three countries in the course of a week. Many of their support vehicles are also being unloaded at La Pallice before the vessel is also scheduled to depart on Monday, for Greece, with the remainder of their helicopters and trucks which are being deployed in Southern Europe. Yesterday, Friday 10th, US Army Europe issued ten Community Notifications to cities and towns along the planned route advising: “From July 13 – July 20, approximately 60 US Army helicopters will depart from La Rochelle, France, and fly to training locations in Germany, Poland and Latvia. During these dates, residents of [city / town] and neighboring communities may see a large formation of helicopters.”

Last night French regional media reported that 350 US personnel deployed on what the French are calling ‘Opération MOUSQUETAIRE’ will be hosted for a month in self-contained accommodation at two French Air Force bases in Rochefort and Cognac while the massive logistic operation to move all the Combat Aviation Brigade’s forward from the Port of Entry at La Pallice continues. In many ways this operation will be similar to the Host Nation Support provided to the US Army by Belgium and the Netherlands during the initial deployment phase of the, subsequently curtailed by COVID-19, DEFENDER-Europe 20 deployment earlier this year through the ports of Antwerp and Vlissingen.

We at JOINT-FORCES.com had hoped it might be possible to visit La Pallice to cover this interesting logistics phase of the deployment, not least as it echoed the major REFORGER 90 deployment I covered thirty years ago, when we learned it was originally hoped that a media facility might be run for the event. Unfortunately this did not come to fruition and as the port at La Pallice is a secure facility with no public access to the quay where ARC Endurance is berthed, photographic coverage of this interesting military logistics operation, the first French-American cooperative venture of this nature ever held in this region, has regrettably not been possible.

Footnote: We are using library images here as no official US Army photographs have been made available from La Pallice at time of publishing, but if any are forthcoming we will endeavour to update the page in due course.