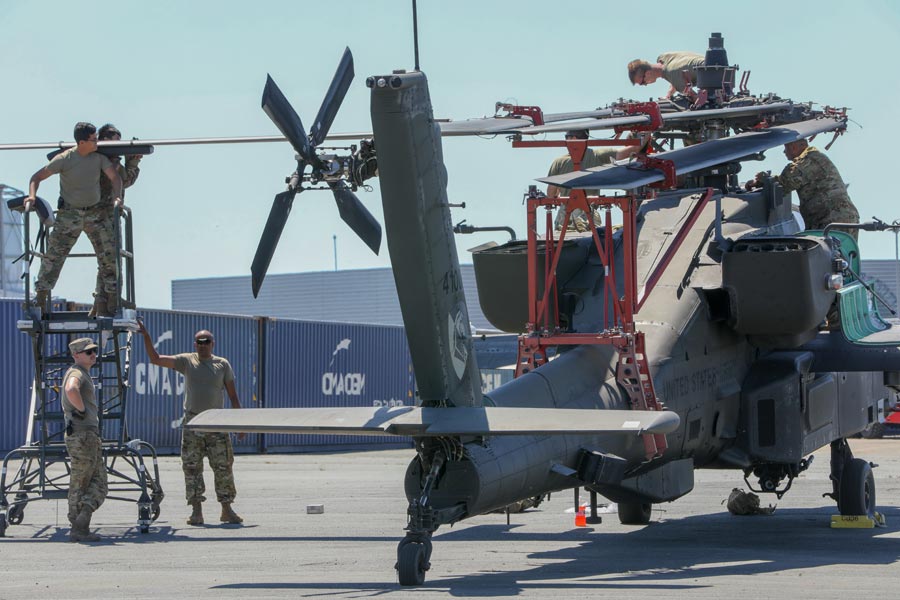 The images in this album show the initial phase of the Opération MOUSQUETAIRE / ATLANTIC RESOLVE 6 deployment of US Army personnel to La Rochelle.

As the month-long deployment of US Army helicopter and logistic specialists to the Charente-Maritime region on France’s west coast, to facilitate the arrival of the bulk of the 101st Combat Aviation Brigade’s helicopters and vehicles, draws to a close USAREUR has now made these images from inside the temporary compound on La Pallice dockside available for publication.

The US-flagged American Roll-on Roll-off Carrier (ARC) shipping line’s vessel ARC Endurance docked in La Pallice, the port area of La Rochelle, on 7th July and over the next two weeks or so 60+ helicopters which had been transported across the Atlantic were prepared for onward flights to training areas in Germany, Poland and Latvia. The many vehicles delivered by the Ro-Ro vessel were mostly loaded onto railcars for onward transportation to Germany and ISO containers of equipment were loaded onto commercial trucks for line-haul to the training areas.

The 101st CAB is the sixth aviation rotation for ATLANTIC RESOLVE and the brigade deployed approximately 2,000 personnel, 50 UH-60 and HH-60 Black Hawk helicopters, 25 AH-64 Apache helicopters four CH-47 Chinook helicopters, and more than 1,800 wheeled vehicles and pieces of equipment through France and Greece. This was the first time a US Army operation of this scale had been conducted in La Rochelle since the 1960s.

For further articles on the ATLANTIC RESOLVE 6 roulement, and on French military involvement on what they designated Opération MOUSQUETAIRE, see:-