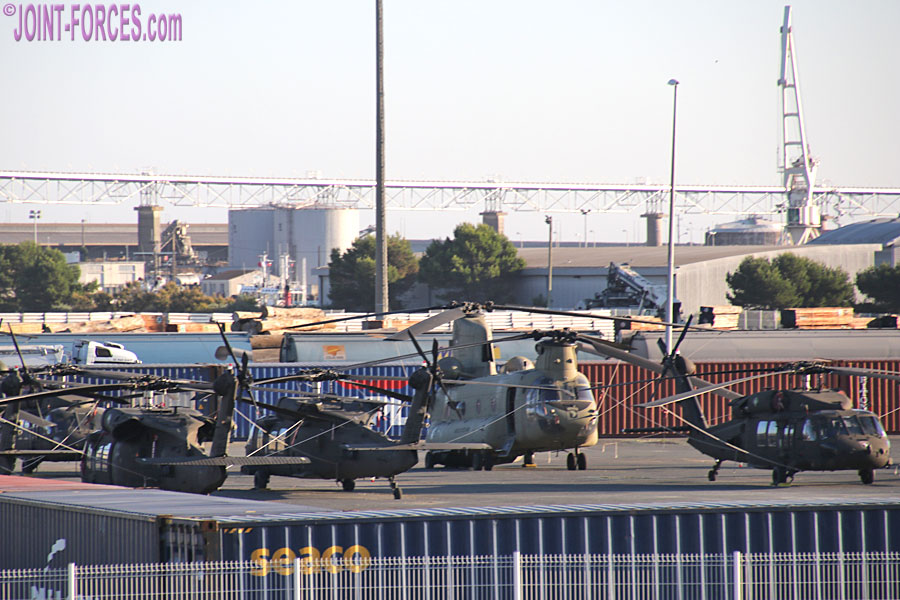 On 7th July 2020 the US-flagged American Roll-on Roll-off Carrier (ARC) shipping line’s vessel ARC Endurance docked in La Pallice, the port of La Rochelle, on France’s Bay of Biscay coast following a transatlantic voyage with 101st Combat Aviation Brigade helicopters and vehicles deploying to Europe on the sixth ATLANTIC RESOLVE roulement. Host Nation Support for the unloading of the ship and the preparations for onward movement, Opération MOUSQUETAIRE or Op MUSKETEER, was provided by the French Government.

ATLANTIC RESOLVE deployments and recoveries, which run to a roughly nine-month cycle though the COVID-19 pandemic has naturally slightly affected the current roulement, are now pretty much a bread and butter routine for the US 21st Theater Sustainment Command (21 TSC). Based at Kaiserslautern in Germany, this formation regularly use major North Sea and Baltic Sea ports for RSO&I (Reception, Staging, Onward movement & Integration) tasks of US Northern European units and their equipment. However as this sixth roulement was brought into Europe through France, a country being used for this type of tasking for the first time in over half a century as ports in Belgium, Germany and the Netherlands are more commonly used for military materiel bound for Germany, we reckoned we had to try to cover the operation.

For a time it looked like a media facility would take place at La Pallice to allow us to see the historic preparation and departure of the 101st CAB’s helicopters on and from the French dockside, but unfortunately although most of the COVID-19 travel restrictions between European countries were eased shortly before the arrival of ARC Endurance, a ‘bubble’ established to limit the possibility of any virus transmission between US troops and their European hosts was still in place and therefore no outsiders were invited inside. To minimise any possibility of virus spread, the approximately 350 American military personnel from 21 TSC and 101 CAB deployed to the Charente-Maritime region to handle the logistic side of the deployment were housed in a separate accommodation block at the French Air Force base south of Rochefort, from where they were transported daily by coach to work in the temporary military compound established at La Pallice and at the nearby railhead inside the dockyard where vehicles were loaded onto flatcars for overnight transfers to Germany.

Inside the port where the helicopters were prepared for their up to 3,000km flight across northern Europe (to training areas in Germany, Poland and Latvia) French Army personnel provided inner security and outside the compound Mission VIGIPIRATE counter-terrorist patrols provided mobile security. A perimeter security ring around the port was provided by the CRS (Compagnies Républicaines de Sécurité) which is the French National Police Reserve organisation often tasked with riot control duties; in addition to platoons of armed CRS officers in minivans, a counter-drone team and maritime sections with Rigid Inflatable Boats were deployed. Overhead what appeared to be a French Naval Aviation (Marine Nationale) Rafale M multi-role fighter periodically patrolled, presumably guarding the air exclusion zone around the port, and a SA 365 Panther naval helicopter patrolled at sea at lower level.

It had been my intention to attend the hoped-for US Army Europe media facility at La Pallice to record this historic event on French soil and with flights already booked, plus a bedroom available with family on nearby Île de Ré, I decided to spend a few days in the sun anyway in the hope that I might be able to snap a little of the action. Initially the handling agents also hoped to obtain a port access pass for JOINT-FORCES.com to allow us to photograph ARC Endurance at the quayside, but the security clampdown knocked that plan on the head. As there were no USAREUR Public Affairs Officers deployed from Germany to La Rochelle to handle the media and as American military personnel were effectively working in a COVID-19 bubble inside a secure compound and therefore not contactable, there was no indication of when the 63 helicopters were likely to take off over the ten days following their arrival. However after enduring four months in Lockdown (was it really that long since Vlissingen?) it was a welcome relief to get away from my computer screens and several hours spent twiddling my thumbs in the sunshine each day while waiting for something to happen was no great inconvenience.

Through the services of my good friends GoogleMaps and LiveMaps, once I had watched ARC Endurance berth at Chef de Baie inside Port Atlantique on live Maritime Radar on the evening of 7th July it did not take me long to work out where there was most likely to be sufficient space to park up 60+ helicopters for flight preparation and take-off. Lady Luck must be on my side as when I arrived at the spot nearest to where I suspected the temporary military compound might be set up I discovered that there was an almost empty rooftop terrace above a restaurant from which I could observe from just a couple of hundred metres from the action. Naturally CRS officers had commandeered the highest part of this terrace as an observation post but on my second visit they reduced their outer cordon slightly, which allowed me a better vantage point at the same height and with almost the same field of view across the temporary airfield.

Over the course of three days I spent around 20 hours basking in the 30+°C sunshine, building up a serious suntan on one arm, while I waited for the action to unfold. On the first day there was not much movement to see for most of the time as the ground crews undertook final preparations behind a compound wall formed of shipping containers and I experienced many false alarms through their occasionally flashing up helicopters they had been working on to check everything was running smoothly. Although it is thirty years since I first watched US Army technicians reassembling helicopters on a dockside following a transatlantic crossing on a military sealift vessel – see REFORGER 90 – the process has actually not changed that much, so although I could only see the very tops of most aircraft, anything between 200 and 500 metres distant, I had a good idea of what was going on out of view.

The first batch of helicopters, including two of the four Chinooks, had departed La Pallice on Monday 13th while I was on my convoluted journey out to La Rochelle and nothing flew out of the port while I was on my rooftop terrace on Wednesday 15th (Tuesday was Bastille Day, which is pretty much sacrosanct in France) but eventually at 14:30 on Thursday the ground crews manoeuvred five UH-60 Black Hawks onto the centreline of the improvised runway, using small green and yellow ground handling tractors, and a little later the pilots flashed their aircraft up for a 15:00 departure. Within 60 seconds all five were in the air and heading eastwards out over Île de Ré on the first leg of their flight to the Baltic Region via Cognac. By my reckoning there were still over 30 US helicopters on the docks, but these would have to wait for another day.

Bright and early on Friday morning I was back at my vantage point as some of the CRS officers were pretty confident that there would be a lot of flying that day. They were proved right when at just before 10:00 a first flight of four AH-64 Apache helicopters, in mutually supporting pairs, took to the air and headed out to sea before swinging round to follow the coastline south in the direction of Rochefort. These were followed by a second flight of Apaches 45 minutes later, but it would be another hour before the first of the Black Hawks of the day, a flight of three medical evacuation (Pedro) aircraft, speedily departed.

As I was beginning to turn beetroot red (even with regular applications of Factor 30 sunscreen) after three days of exposure to very bright sunlight for the first time following four months of Lockdown, and as the last pair of Chinooks did not look like it would be moving any time soon, I decided I had enough shots of 101st CAB Apache and Black Hawk helicopters in the can for one trip and so gave myself the rest of the day off. Shortly later, while crossing the bridge to Île de Ré, I watched the next flight of five Black Hawks departing the port; though after a brief flight one split off and returned to the temporary airfield on the docks while the others headed south.

As for ARC Endurance, her next port of call was Alexandroupolis in Greece, where she unloaded the remainder of 101st Combat Aviation Brigade’s helicopters and vehicles. Ten of these helicopters were bound for training areas in Romania, via a refuelling stop in Hungary, with an expected arrival date of 25th July.