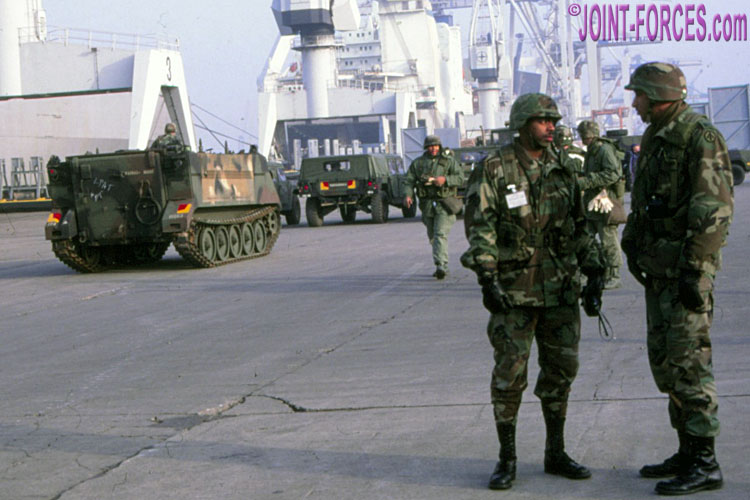 Recently unloaded US Army vehicles on the quayside at Antwerp Docks, January 1990 [BM]

As DEFENDER-Europe 20 commences in the North Sea Ports, this seems a good time to roll the clock back three decades to look at the REFORGER 90 deployment, writes Bob Morrison.

Thirty years ago I was allowed the privilege of entering the Belgian-run Temporary Military Village at Antwerp Docks as the first US Strategic Sealift Ship was unloading prepositioned materiel for the incoming CONUS- (CONtinental United States-) based division preparing to reinforce Western Europe on what was, in my opinion, the last true REFORGER (RETurn of FOrces to GERmany) deployment.

In 1967, at the height of the Vietnam War, it was decided to remove two US Army Divisions from West Germany the following year but to underscore that the United States was still willing to support NATO by reinforcing standing forces facing potential Warsaw Pact aggression by rapidly deploying Infantry and Armored Division back in-theatre, it was decided to hold an annual exercise under the REFORGER banner. Each year from 1969 through to 1988, excluding 1972 as two REFORGER deployments were held in 1973 at each end of the year, at least one and as many as three US Army Divisions were transported across the Atlantic to support the USAREUR (US Army Europe) Divisions and Regiments.

There was no REFORGER in 1989 but in January 1990 no less than three US Army Divisions (1st Infantry, 2nd Armored and 10th Mountain Light) plus an Army National Guard Armored Brigade were flown across The Pond to Europe. By this time the Berlin Wall, and then the Iron Curtain, had just fallen and the Warsaw Pact was imploding but it was too late to stop the exercise juggernaut rolling. The 1991 Gulf War saw REFORGER 91 involvement necessarily reduced to a single Division, REFORGER 92 involved just a single Division plus a small number of Headquarters units and REFORGER 93, the last in the series, involved only Europe-based US Army formations.

The images on this page were all taken by myself on Antwerp Docks in January 1990 and should hopefully give our readers a basic insight into the logistics side of bringing military materiel across the Atlantic to support the incoming troops. Back in these days there were also stocks of prepositioned US armour and vehicles held in climate controlled storage in depots in the Low Countries and in the extreme west of West Germany, but for REFORGER 90 the number of formations deploying on the follow-on Exercise CENTURION SHIELD meant that a shipborne sets (POMCUS – Prepositioning Of Materiel Configured in Unit Sets) of wheels, tracks and rotors had to be delivered to ports in the west and transported forward by road, rail and, in the case of the helicopters, air. Some of my images of ‘shrink-wrapped’ Apache helicopters were snapped up by UK aviation magazines at the time as they were quite rare.

Being a bit of a magpie I still have most of my REFORGER 90 / CENTURION SHIELD transparencies on file – sorry about the poor quality but I had just gone over to slides and light conditions were terrible – and once I have had a search for my contemporary notes I will try to follow on with a look back at the exercise phase in Germany, which I also covered.

¤ To read our DEFENDER-Europe 20 coverage click this DEF20 search link.