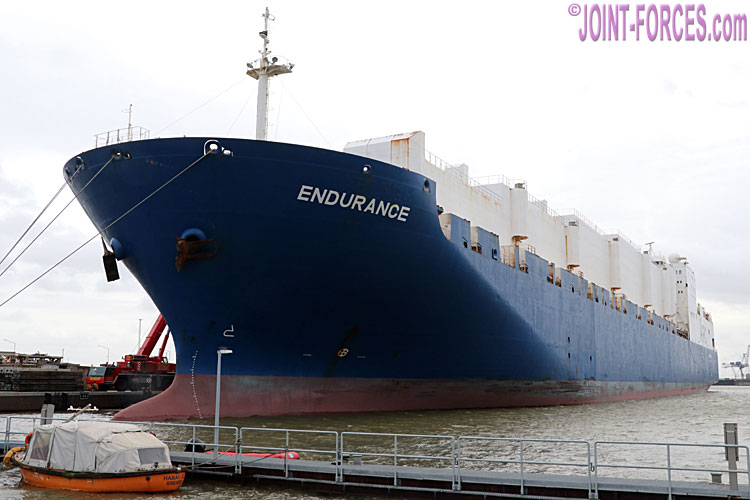 The sixth US Army ATLANTIC RESOLVE rotation is this evening well underway with the arrival of rotary aviation assets in the French port of La Rochelle.

A little after 19:30 local time this evening, the ARC (American Ro-Ro Carriers) Endurance berthed in La Pallice, Grand Port Maritime de La Rochelle, with the assistance of local tugs. On board is a major element of the approximately 50 UH-60 and HH-60 Black Hawks, four CH-47 Chinooks, 25 AH-64 Apaches and more than 1,800 wheeled vehicles and items of equipment belonging to a Combat Aviation Brigade (CAB) being deployed across the Atlantic to Europe.

Since April 2014, shortly after annexation of the Ukraine’s Crimean Peninsula by the Russian Federation, US Army Europe has led the Department of Defense ATLANTIC RESOLVE land efforts by bringing US-based units to Europe for nine-month rotations. On 1st July 2020 the roughly 3,500-strong 2nd Armored Brigade Combat Team of the 3rd Infantry Division, from Fort Stewart in Georgia, assumed the ATLANTIC RESOLVE mission from 2nd Armored Brigade Combat Team of the 1st Cavalry Division; see this Transfer of Authority post. Additionally, the 101st Airborne Division Combat Aviation Brigade, from Fort Campbell in Kentucky, are now replacing the 3rd Infantry Division Combat Aviation Brigade; their soldiers began to arrive in Germany in late June and this evening much of their equipment started to arrive in La Rochelle, with a second tranche bound for Alexandroupoli in Greece.

Personnel and equipment from 2ABCT from 3rd Infantry Division are already in Europe, having originally arrived in February to participate in Exercise DEFENDER-Europe 20, but due to the COVID-19 travel restrictions it became necessary to adjust deployments and the unit stayed in Europe. The armoured rotation, some of which we covered on arrival in Bremerhaven in February aboard Endurance, has approximately 3,500 soldiers and approximately 85 Abrams Main Battle Tanks; 125 Bradley Infantry Fighting Vehicles; 40 M1068 Standard Integrated Command Post System Carriers, 15 M109A6 Paladin 155mm Self-Propelled Howitzers, 10 M7 Bradley Fire Support Vehicles, 15 M1064 Self-propelled 120mm Mortar Carriers, and other support equipment.

Talking in mid-June, Colonel Travis Habhab, Commander of the arriving 101st CAB said: “The hard work from these soldiers really helped set the conditions for what’s going to be an incredible deployment for the ‘Wings of Destiny’. We are on our way to build readiness overseas, become a more lethal unit, increase the capability of our partners, and deter enemy threats. Our soldiers have started off at a great pace. I am confident that their hard work will continue throughout the next nine months, and they’re going to make everyone in the 101st proud.”

The official US Army line on the mission is: “The deployment of ready, combat-credible US forces to Europe in support of ATLANTIC RESOLVE is evidence of the strong and unremitting US commitment to NATO and Europe. Through bilateral, joint and multinational training, ATLANTIC RESOLVE builds readiness, increases interoperability and enhances the bond between ally and partner militaries.”

¤ The name the French are using for this deployment through France is Opération MOUSQUETAIRE (MUSKETEER).

Footnote: We will update if / when new images become available from La Pallice.