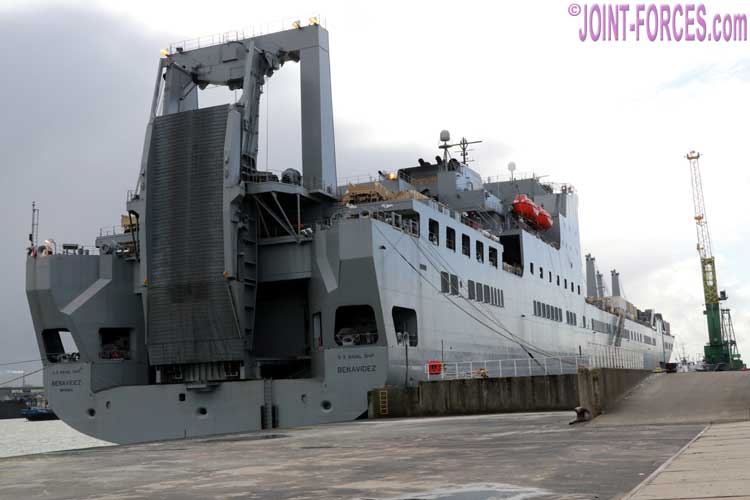 USNS Benavidez with 2ABCT, 1AD vehicles and equipment aboad on the quayside at Vlissingen [©BM]

Two days ago, before DEFENDER-Europe 20 was scaled back, USNS Benavidez berthed in Vlissingen Port to unload US Army vehicles and materiel in the Netherlands, reports Bob Morrison.

Tomorrow, Saturday 14th March, DEFENDER-Europe 20 should have moved into high gear, with troops from 104th [UK] Logistic Support Brigade along with the US Army’s 21st Theater Sustainment Command and 598th Transportation Brigade conducting download operations and preparations for follow-on movements in the Temporary Military Village (TMV) established by the Dutch Army on a Vlissingen quayside.

The unloading of USNS Benavidez of tracked and wheeled vehicles and other equipment from 2nd Brigade Combat Team, 1st Armored Division, is just the latest victim of the COVID-19 Corona Virus and the US Military Sealift Command ship will shortly turnaround and head back out to sea. This afternoon, at the invitation of the Dutch Ministry of Defence, we visited the TMZ and the quayside to photograph both Benavidez and Netherlands Korps Nationale Reserve personnel from 13 Lichte Brigade who are providing port security and logistic support. If all goes to plan we will produce more detailed articles on both next week.