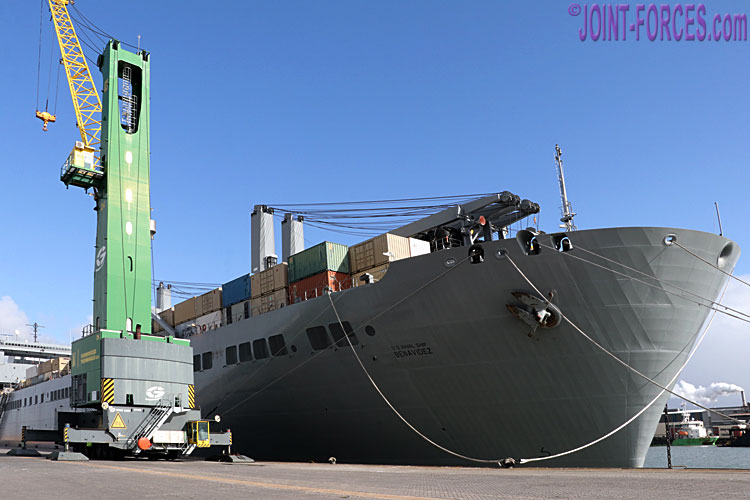 US Military Sealift Command was to the fore in the initial deployment phase of the now cancelled DEFENDER-Europe 20 (DEF20) US Army move across the Atlantic, reports Bob Morrison.

Now effectively cancelled in response to the COVID-19 (Corona Virus) pandemic, DEFENDER-Europe 20 or DEF 20 was the deployment of a Division-size combat-credible force from the United States to Europe, which would have seen US-based equipment leave from ports in four States on one side of the Atlantic and eventually arrive in six European countries on the other side of the ocean.

However before the initial Participant Reduction decision for the DEF20 deployment was announced, on 11th March, by HQ EUCOM (US European Command) four US Military Sealift Command Ro-Ro (Roll-on, Roll-off) vessels out of six expected in the initial wave had crossed the Atlantic laden with tracked and wheeled vehicles plus other materiel aboard and one of two planned cross-channel moves of British vehicles by Point-class vessels had been completed. From early February to mid-March at the invite of USAREUR (US Army Europe) and the Belgian, Dutch and German Defence Ministries – curiously, the UK MoD Press Office remained resolutely tight-lipped for the duration of this major exercise despite us repeatedly requesting information on the 500-strong British Army logistics involvement – we visited the SPOD (Sea Port of Debarkation) in three countries on the eastern shores of the North Sea to document the arrivals.

So what precisely is US Military Sealift Command? According to its Mission Statement: “The US Navy’s Military Sealift Command is the premier provider of ocean transportation to the Department of Defense. The Command operates approximately 125 civilian-crewed ships that replenish US Navy ships, conduct specialised missions, strategically preposition combat cargo at sea around the world and move military cargo and supplies used by deployed US forces and Coalition partners.”

Ships on the Military Sealift Command inventory are highly varied in type and role, but fall into eight basic categories:-

The vessel which arrived in Vlissingen-Oost docks shortly before EndEx was called on the DEF20 deployment was USNS Benavidez (T-AKR-306). This 290-metre long Ro-Ro ferry is one of five Bob Hope-class Vehicle Cargo Ships on the 24-strong PM5 fleet which are used primarily for the prepositioning of US Army tracked and wheeled vehicles; two sister ships in this class are also on the PM3 inventory. With forward vehicle ramps in both sides and a slew-able rear ramp, plus four large deck cranes, Benavidez can transport 27,000 tonnes of cargo; internal deck space amounts to 28,000m² and another 4,600m² is available for open air deck cargo.

On 20th February Benavidez sailed up the Neches River in Texas to the port of Beaumont, where she joined the Motor Vessel ARC Resolve (see DEF20 ~ 2ABCT of 3ID Armour Deploys for more about ARC ships) to begin loading vehicles and equipment belonging to 2nd Brigade Combat Team of 1st [US] Armored Division bound for the Low Countries and onward movement through Germany to training areas in Poland. After Benavidez had been loaded, which took a few days, she crossed the Atlantic in convoy with MV Resolve and escorted by the guided-missile cruiser USS Vella Gulf. It was intended that 104th [UK] Logistic Support Brigade along with the US Army’s 21st Theater Sustainment Command and 598th Transportation Brigade would conduct download operations at Vlissingen and preparations for follow-on movements, but although the US Navy Ship docked in the port the concern about spread of the COVID-19 pandemic terminated operations before any vehicles or cargo were unloaded.

The media, including JOINT-FORCES.com, had been invited by both the US and Dutch military to a planned guided tour of the Vlissingen-Oost port area on Saturday 14th March , including hopefully an opportunity to go aboard the Military Sealift Command transport ship, preceded by a welcome briefing given by UK Lieutenant General Ivan Jones, Commander Field Army. At lunchtime on Thursday 12th the Dutch Ministerie van Defensie advised: “The British Army has decided that the DEFENDER-Europe media event will be cancelled on Saturday in the port of Vlissingen”. However, as I had already commenced my journey to Vlissingen, via London and Amsterdam, to arrive at the port the day before the formal media visit and it was therefore too late to cancel flights and hotels, the MvD kindly allowed me to visit the Temporary Military Village at Vlissingen on Friday 13th, before the US deployment was formally downsized.

Accompanied by the Dutch Army’s Vlissingen Port Commander himself, thanks Major Voets, I was able to photograph Benavidez at her berth but of course I was unable to go aboard because the ship’s crew were distancing themselves as a COVID-19 precaution. Fortunately, the ship’s loading process and voyage were documented by US Navy photographers whose images, along with a few I was able to snap, have allowed me to produce this feature.