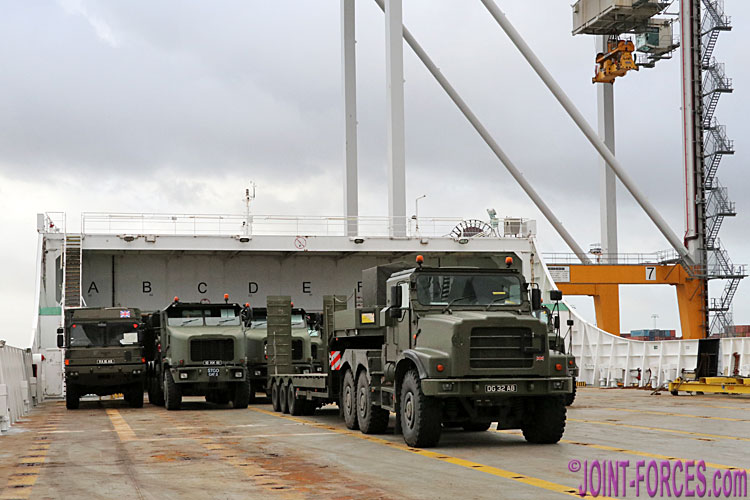 Over the next few months the US-led and NATO-supported DEFENDER-Europe 20 (DEF20) deployment is planned to not only involve military personnel and equipment from 18 nations but also see ten countries providing support & logistic activities and hosting field training exercises.

An echo of the REFORGER (REturn of FORces to GERmany) exercise series which ran from the height of the Vietnam War through to just after the fall of the Iron Curtain, DE20 will see the participation of an estimated 38,000 troops including the Deployment and RSOI (Reception, Staging, Onward movement and Integration) of a CONUS- (CONtinental United States) based full US Army Division plus supporting elements. The United Kingdom, which has announced it will deploy around 3,500 military personnel on the exercise, is initially providing a Heavy Lift Capability to move incoming US armour and equipment overland to / across Germany and Belgium has provided the first Host Nation Support element for the initial British and US moves by opening up part of Antwerp Docks and creating a Temporary Military Village.

We joined the exercise on Monday morning at Antwerp Euro Terminal, around 90 minutes after the Ro-Ro ferry MV Eddystone had berthed following its voyage through the English Channel from Marchwood Sea Mounting Centre, and after a briefing from Colonel Paul Haccuria, the Military Commander of the Antwerp Province, we were transported to the quayside to watch the first British Army vehicles being driven off the ship. MV Eddystone is one of four British-registered Point-class Ro/Ro (Roll-on / Roll-off) ferries, crewed by Navy Reservists, used as sealift ships to each move up to 8,000 tonnes of vehicles and/or equipment at a time; on the vehicle decks there are over 2,600 metres of vehicle lanes available and alternatively ISO containers can be stacked on the upper vehicle deck.

After having their vehicles refuelled by the Belgian Army (to avoid fuel spills in inclement weather it is prohibited to travel by ferry with full tanks) the British Army drivers parked up and retired to rest accommodation provided in the Temporary Military Village before that night’s drive to Mönchengladbach in Germany. On their 130km convoy move, in packets of no more than 20 vehicles travelling during the hours of darkness to avoid disruption to civilian traffic, they would be escorted by Belgian Military Police on this first leg of the ‘Pony Express’ type operation to move US Army armoured vehicles forward from APS (Army Prepositioned Stocks) warehouses to be in position when CONUS-based troops are flown over to Europe to pick them up.

We intend to cover as much as possible of DEFENDER-Europe 20 over the next few months, though of course our limited resources mean we will simply not be able to do everything we might wish to. The next phase of the deployment we hope to be able to document will involve US Army units in Europe.

¤ I should like to express my personal thanks to Colonel Haccuria and the Belgian MoD Media Officers, the Belgian Army personnel and the 17 Port & Maritime Squadron team (particularly WO2 Tonu) for their help and hospitality at Antwerp Euro Terminal.

¤ The UK MoD defence communications team in Whitehall has informed us that the first media facility for DEFENDER-Europe 20 they will be organising is likely to be in April and we have requested they keep us in the loop; with 3,500 UK Forces personnel involved in this major 18-nation exercise, i.e. around one tenth of the total, the parts they play are likely to be crucial.