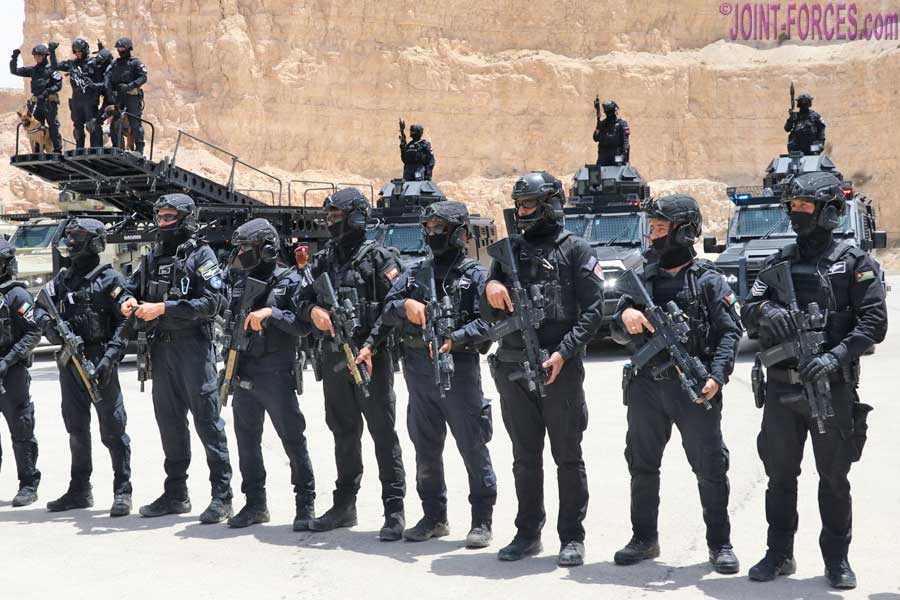 With the dust settling and smoke clearing after the Jordanian Royal Guard had successfully protected and extracted the VIP dignitary then dealt with their attackers (see Part One) a vehicle-borne group from Special Unit 71 of the KAII SFG stormed a medium rise building occupied by the insurgents’ command cell where, in addition to High Value Targets, a number of hostages were being held.

With snipers providing overwatch from high ground SFG assault teams sped forward in JLVM Al-Jawad 4×4 armoured personnel carriers to debus and leap-frog towards the primary objective, taking out the outer ring of insurgents (represented by targets behind temporary wall sections) using live assault rifles and light machine guns. Meanwhile a three vehicle squad raced through the breached perimeter to assault and clear the building at both ground and first floor levels, as a dedicated SpecOps UH-60L Black Hawk helicopter with an MD 530F ‘Baby Bird’ riding shotgun simultaneously swooped in overhead to drop another assault team onto the roof.

On safety grounds because live rounds were being used, and also to allow the spectators to see the action, the battle run was staged slightly unrealistically at right angles to the building with the Special Unit 71 operators firing towards the quarry wall as a backstop. The teams which assaulted the target building and entered to rescue the hostages and capture the HVT used Simunition marker rounds to avoid collateral damage. This combined display of Special Operations tactics and capabilities by the elite formation previously known as CTB 71 or Counter-Terrorist Battalion 71, took less than three and a half minutes from the first Al-Jawad (we plan to cover this Jordanian-built vehicle in a later feature) arriving on the scene to the last operator climbing back aboard and extracting to allow then allow the Quick Reaction Force Brigade to show off their capabilities.

As previously mentioned, we were permitted to photograph the dress rehearsal on the day before the official 12th AWC Opening Ceremony. On that occasion there were fewer restrictions because the mainstream media was not in attendance and therefore the Jordanian MoD press handlers and Military Police did not have a battle on their hands trying to ‘herd cats’ to ensure nobody got in the way of live rounds or speeding armoured vehicles. At the rehearsal Special Unit 71 were wearing their everyday camo uniforms, either M2015 SpecOps pattern or MultiCam, but for the big day they changed into their all-black combats. The first batch of photos on this page was taken at the rehearsal and the remainder are of the main display.

Now a little bit on the current Jordanian Special Forces structure. Following a review in 2017 it was decided to reform Jordanian Special Operations Command or JSOC, which had expanded considerably during the 21st Century to the point where it was essentially a rather unwieldy three brigade formation of Special Forces, Special Operations and Special Forces Support units. In June 2018, shortly after my last (i.e. pre-COVID) visit to KASOTC the King Abdullah II Special Forces Group and the Mohammed bin Zayed QRF Brigade were formed and the 5th Prince Hashim Bin Abdullah II Aviation Brigade was transferred to Royal Jordanian Air Force command; though the 28th and 30th Aviation Squadrons were still dedicated to supporting the Special Forces Group. The 71st (black role) and 101st (green/camo role) Special Battalions are the two primary formations in the restructured KAII Special Forces Group with the 61st, 81st and 91st Quick Reaction Force Battalions forming the MbZ QRF Brigade. It is my intention to cover the QRF Brigade display, which followed the KAII SFG display, in Part 3.