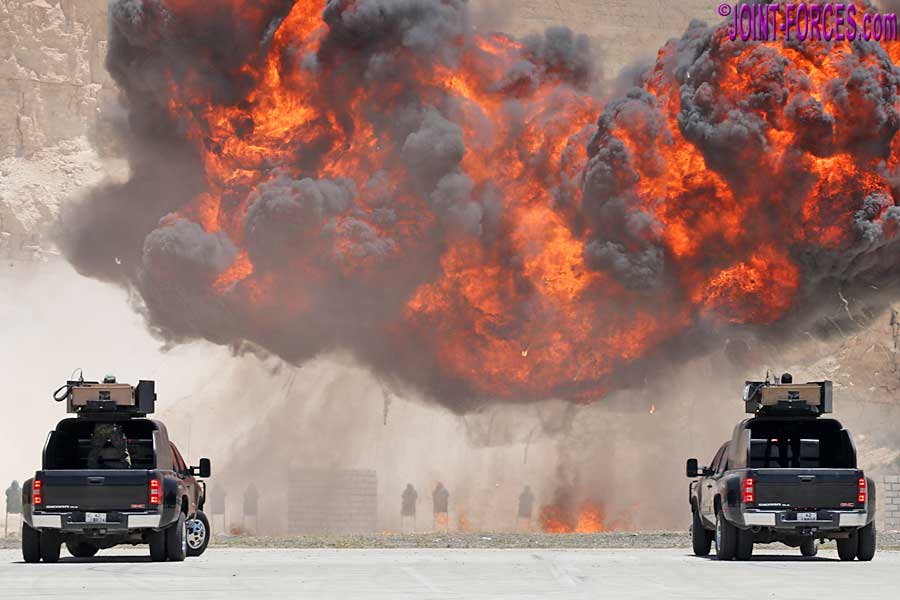 In a formal Press Release issued 5th June 2022, the Jordan Armed Forces or JAF issued the following statement: “Within the annual training plans and programmes implemented by the General Command of JAF to raise the level of efficiency and readiness of its members, in a way that contributes to enhancing its capacity and effectiveness to meet operational requirements and confront potential threats, the Chairman of the Joint Chiefs of Staff, Major General Yousef Ahmed Al-Hunaiti, sponsored the launch of the activities of the 12th Annual Warrior Competition at the King Abdullah II Special Operations Training Center (KASOTC), with the participation of 40 teams representing 25 countries.”

At the Official Opening Ceremony for 12th AWC a number of dynamic displays were undertaken back-to-back by the armed forces and security services, commencing with a scenario which saw the protection of a VIP travelling in a vehicle convoy which came under attack from a heavily armed group of insurgents using improvised explosive devices and assault rifles. The dignitary’s escorts were members of the elite Royal Guard, who reacted to the initial attack by deploying from accompanying vehicles to lay down a barrage of live fire to give cover while the intended target was driven out of harm’s way and heavier firepower was brought forward to effectively deal with the attackers.

In addition to watching this high tempo display on the big day, from the crowded enclosure where an actually very well behaved media scrum jostled for elbow room behind a safety cordon, which was an absolute necessity as so many vehicles were speeding past while the air was full of flying rounds, we were also granted the privilege of watching and photographing the dress rehearsal with a little less in the way of restrictions. The only other photographers present at the rehearsal were some of the JAF Combat Camera Team, with whom I have worked at KASOTC since 2014 (when I first met the legendary but now retired Mansur) so most of the photographs from this were not only from slightly better angles but no heads, elbows or TV camera lenses were able to annoyingly sneak into the corner of the frame.

On the big day almost all of the Royal Guard were clothed in black uniform but for the rehearsal a few of them wore their distinctive KA2 RG digital camouflage combat dress and if I had not spotted this, plus the uniformed senior Royal Guard officer who marshalled the final run-through, it could have been hard to tell which elite Jordanian formation was participating as insignia worn was minimal. Finally, this entire scenario lasted only a few seconds over two minutes from that initial trio of vehicles approaching from my right to that final special effects explosion in the lead image on this page. Impressive!

¤ For Part Two I plan to turn my cameras on Special Unit 71 (formerly 71 CTB) as ‘black’ teams storm a multi-level building with vehicles and helicopters while ‘camo’ teams pin down supporting insurgents by using assault rifles and light machine guns in a fast-moving live fire assault.