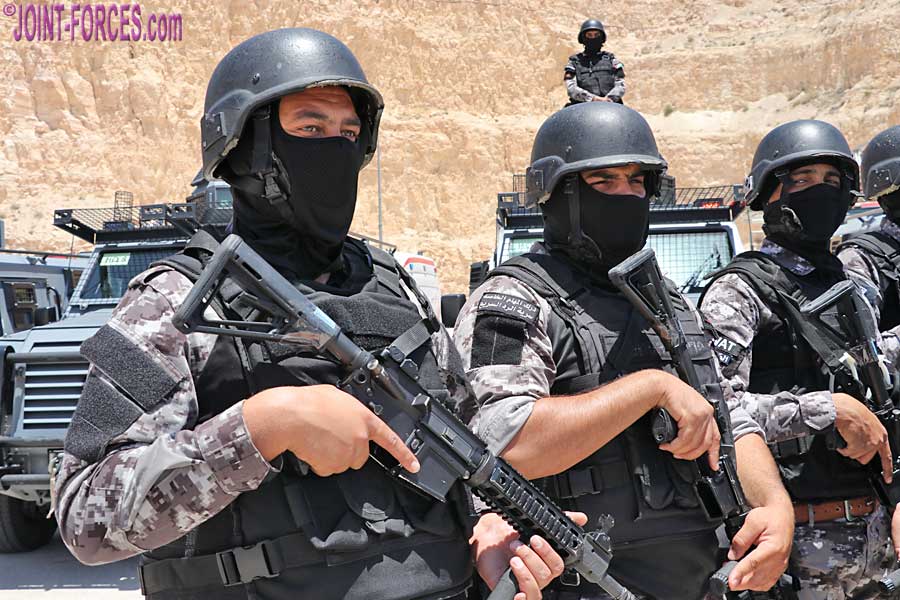 While Unit 71 was conducting their building assault (see Part 2) and 81st QRF battalion was performing a live-fire attack, a platoon of Gendarmerie Special Operators deployed on the perimeter to both provide a cordon and also take down their own banks of targets. From our vantage point, far off to the left rear of the live-fire range they were using, we were unable to get decent photos of this but we could hear the volume of rapid fire they put down; when so much ultra-fast action is taking place on several ranges it is regrettably impossible for one photographer to capture everything on camera and so we have to prioritise. On the positive side, Gendarmerie SpecOps also took part in the final rehearsal on the day before the 12th Annual Warrior Competition Opening Ceremony display, and this gave me the chance to get in close for a few of the more relaxed photos on this page.

The primary vehicle used by the Gendarmerie is the JODDB, formerly KADDB, Al-Jawad (The Horse) ISV manufactured by Jordan Light Vehicle Manufacturing or JLVM, which was formed at the start of the millennium as a 20-year joint venture with Britain’s Jankel Group. An evolution of the early Jankel Aegis derivative of the Jankel Stirling, the JLVM Al-Jawad is an 8-tonne GVW 4×4 armoured personnel carrier configured for the ISV (Internal Security Vehicle) role and is based on a Ford F-series heavy pick-up truck chassis.

Powered by a 6.7litre V8 diesel engine developing 300hp and with a six-speed automatic gearbox, the Al-Jawad has a top road speed of 130 km/h and a road range of 650km. Measuring 6300mm long and 2200mm wide, by 2400mm high to top of hull, the vehicle is crewed by two and can transport eight dismounts on inward facing bench seats. According to JLVM it can tackle a 60% gradient and 30% side slope and both approach and departure angles are in excess of 28°. A machine gun cupola can also be fitted, and this year all Gendarmerie vehicle I saw were now fitted with these.

At the 10th Annual Warrior Competition in 2018 (the last one I attended as other commitments usually prevent me attending in odd years and the COVID pandemic forced postponement of the 12th until this year) the Gendarmerie SpecOps also participated in the dynamic display and on that occasion the Al-Jawad fleet they used had simple roof hatches rather than cupolas. I have included photos of these as well as I suspect some of our readers who are also scale modellers might find them to be useful.

For our uniform enthusiast readers, the Jordanian Gendarmerie wear the predominantly grey four-colour Public Security Directorate digital pattern camouflage. A Police variant of the Hyperstealth Biotechnology KA2 family of patterns was introduced in 2004 but later uniforms appear to use a slightly different pattern with a pinkish base colour. The Gendarmerie entered a team in Warrior Competition this and we have included a couple of photos for camo reference as I have not yet had the opportunity to do a full Kit & Camo walk-round set of images.