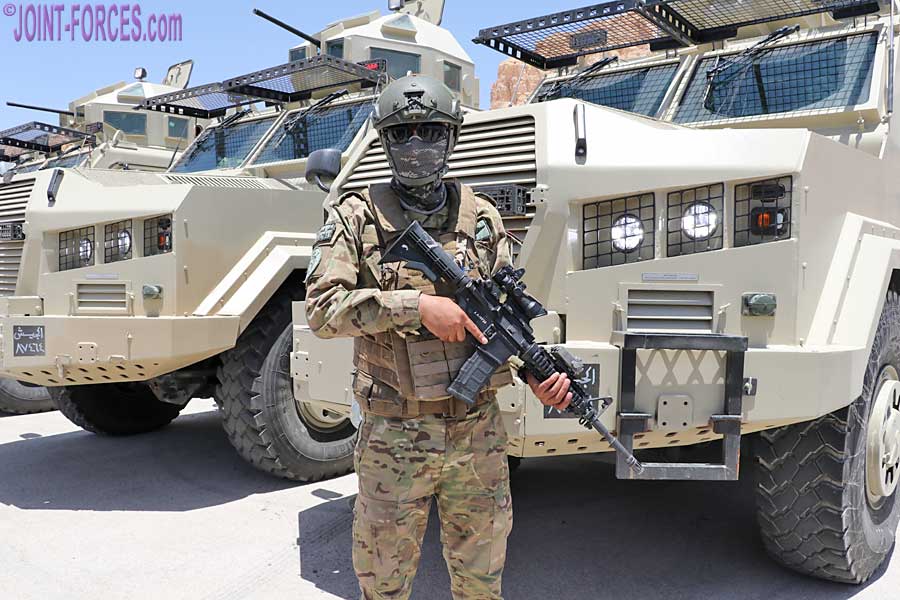 The QRF unit which displayed at 12th AWC, in support of Special Unit 71, was drawn primarily from 81st QRF battalion plus a section from the Female Engagement Team. Once the KAII SFG team had assaulted the insurgent-held building and rescued the hostages, the QRF element advanced in Al-Wahsh 4×4 Protected Patrol Vehicles for a live attack against targets on the firing range and, to demonstrate the battalion’s air assault capabilities, another section fast-roped from a UK-60L Black Hawk helicopter to back them up.

Although QRF personnel are parachute and air assault trained to enable long range rapid intervention missions, the brigade also has its own fleet of Jordanian designed and built Design and Development Bureau) armoured vehicles and a trio of these was used for the display. Designed by KADDB (King Abdullah II Design and Development Bureau) which was recently renamed JODDB (Jordan Design and Development Bureau) and built in-country by Jordan Light Vehicle Manufacturing or JLVM, originally set up as a twenty year joint venture with Britain’s Jankel Group to build a national military vehicle manufacturing industry, Al-Wahsh (The Beast) is a ten-person armoured 4×4 built on a Tatra chassis which was first unveiled at SOFEX 2016 and deployed by the Royal Guard in 2018.

For the next article in this mini-series I plan to look at a coach take-down by Special Forces before concluding with a brief look at the Gendarmerie unit which supports JORSOF and at their Al-Jawad light armoured personnel carrier.