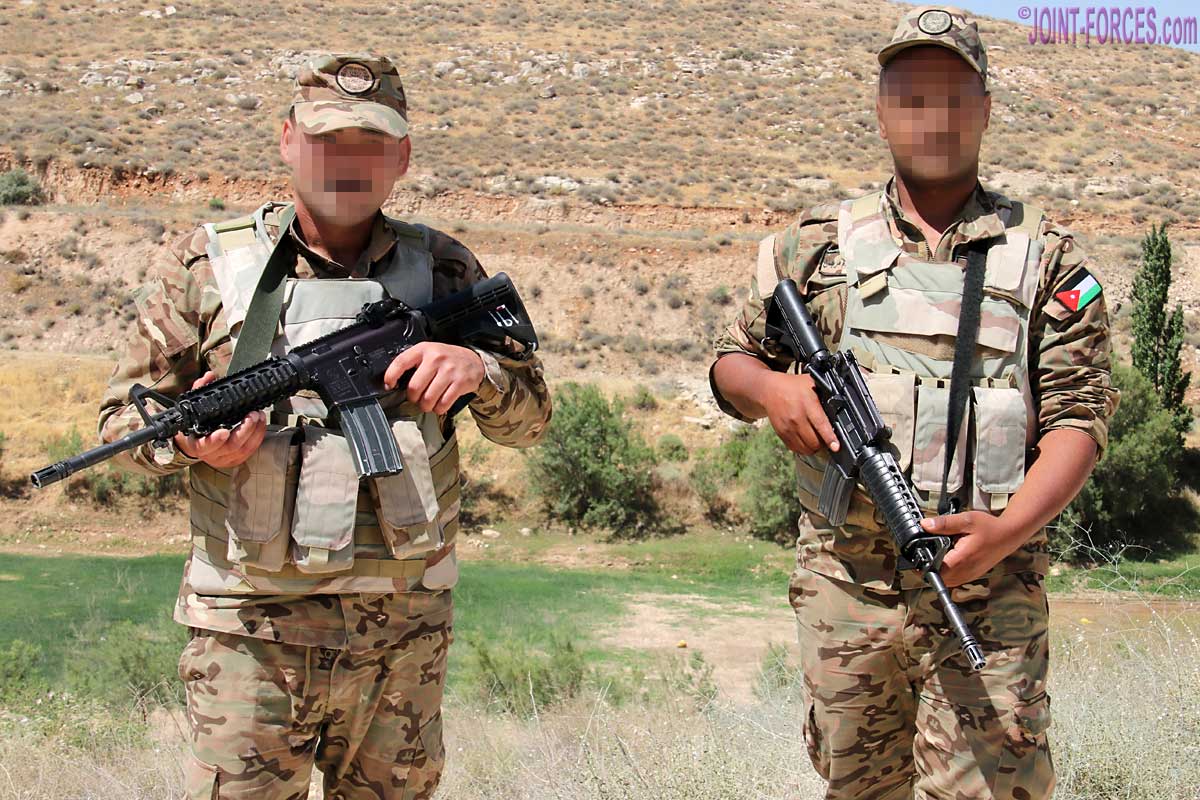 Since late 2015 some Jordanian Special Operations Forces have been wearing a homegrown analogue camo pattern instead of 2006 KA2 SF digital, writes Bob Morrison.

The Hashemite Kingdom of Jordan was one of the first nations to fully embrace the new 21st Century fashion for digital camouflage patterns, introducing several different variations for the armed forces and security forces, but following the slightly later ‘MultiCam Revolution’ and in response to the increasing in unrest around North Africa and the Middle East for a short period they too adopted the ubiquitous Crye Precision commercial pattern until they were able to develop a new amoeba-type pattern on their own with a colourway slightly tweaked to suit their specific home region.

Usually referred to as JORSOF or Jordan QRF pattern, and sometimes M2015 JSOC pattern, this newish camo is worn by some but by no means all Jordanian SpecOps and it is not at all unusual to see operators from the same unit working alongside and wearing MultiCam (or possibly a derivative) uniforms and personal equipment. At this stage it is possibly worth pointing out that since my last visit to the Kingdom in 2018 (my planned 2020 trip was cancelled by the pandemic) Jordan’s Special Operations Forces have been restructured into a Special Forces Group and a supporting Quick Reaction Brigade, but this is a complicated topic I will try to delve into in a little more detail at a later stage. On my June 2022 visit to KASOTC both SFG and QRB were frequently and confusingly referred to under the QRF (Quick Reaction Force) umbrella term.

My first opportunity to photograph the then new M2015 JSOC was at the 8th Annual Warrior Competition at KASOTC in May 2016 but I did not get the chance to photograph Operators from the same unit wearing the homegrown analogue pattern alongside MultiCam until this June. When seen worn side by side uniforms in the two patterns can be hard to differentiate, not least because clothing bleached by a hot desert sun and coated with a patina of fine dust loses some of its detail, but up close it is very clear that the Jordanian camo is not a MultiCam copy and there are quite definite differences.

While just like MultiCam the Jordanian pattern still uses greens, light brown shades, a dark brown and a light stone, with blending and over-printing to give the effect of more colours, the browns appear to have a pinker hue which better matches Jordanian terrain. The greens also seem to be a little less subdued, again no doubt to match the national vegetation, and there is much less blending between colours. As for the secondary (dark brown) and tertiary (light stone) shapes, these are a bit larger and more amoeba-like with the smaller rounded shapes nesting inside the larger ones.

I was unable to persuade any of the guys at KASOTC to pose for a series of four-view photos, mostly because there was no officer available to authorise this, but hopefully the accompanying photos will give you a flavour of what this comparatively rare pattern looks like in its natural environment. Note that faces and name tapes have been obscured to preserve anonymity in line with Jordanian MoD requirements.