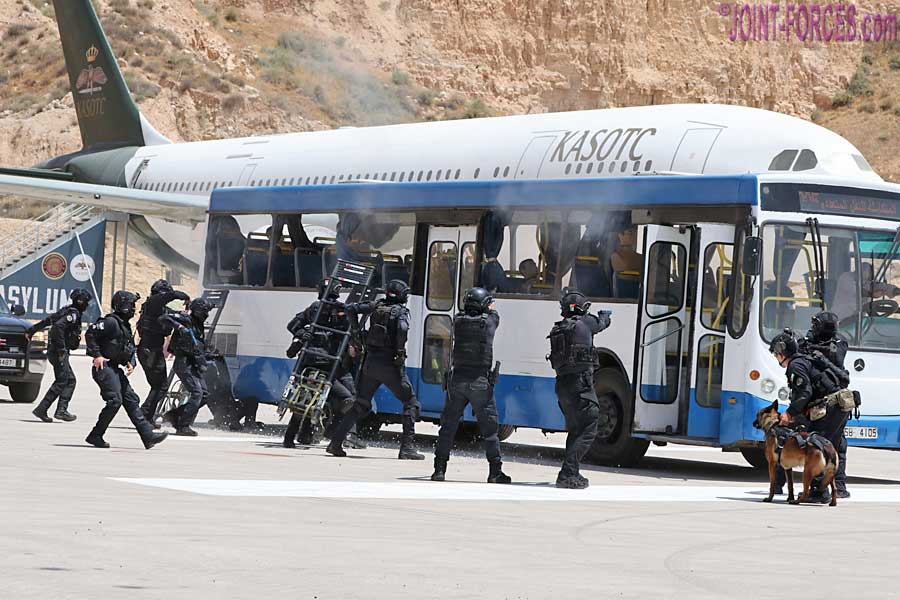 In addition to storming a building, Jordan’s elite Special Unit 71 undertook a bus take-down during the dynamic displays at KASOTC in June, writes Bob Morrison.

As part of the overall scenario of the Special Forces and Special Operations dynamic displays mounted as part of the Opening Ceremony of the 12th Annual Warrior Competition at Jordan’s world class King Abdullah II Special Operations Center, abbreviated to KASOTC, fleeing insurgents hijacked a public transport authority bus with passengers on board and headed for an airport in the hope of hijacking an aircraft to flee the country… but Unit 71, formerly CTB 71, were not going to allow that to happen!

If you have been following this mini-series you will be aware that I was allowed access to KASOTC the day before the official opening ceremony and this gave me the chance to photograph the rehearsal without the restrictions of being penned in to a crowded pen with the mainstream media ~ though of course with vehicles tearing around at high speed and live rounds flying down range I still had to stay within the designated safety box. For the rehearsal the operators from Unit 71 dressed in their camouflage uniforms, a mixture of MultiCam and M2015 SpecOps pattern, but for the big day they were clad entirely in black.

Within seconds of the building assault team leaving the display arena to the south-east aboard their Al-Jawad personnel carriers, the highjacked bus sped in from the south closely followed by GMC Suburban SUVs with armed Unit 71 operatives riding on the running boards as an MD 530F ‘Baby Bird’ or ‘Flying Egg’ helicopter with sharpshooters on board flew above and behind in the insurgents’ blind spot. As one Suburban, with a team of operators plus a dog handler and his canine companion, blocked the bus and forced it to a halt a second SUV following closely behind disgorged a nine-man Special Forces assault team from its running boards to board the bus and neutralise the highjackers allowing the safe release of the hostages and the bus driver; the latter being one of the Unit 71 support personnel, as were the SUV drivers. The helicopter was from 28 Squadron of the Royal Jordanian Air Force, which has aircraft and trained crews dedicated to supporting the Special Forces and Quick Reaction Force.

By looking at the file info on my digital images I am able to verify that on the day of the rehearsal the entire operation took just under one minute from the bus skidding to a halt to the last operators leaving the arena with all their kit. On the big day itself, I reckon Special Unit 71 shaved a few more seconds off that. It is now 18 years since I first watched CTB71, as the Unit was designated at that time, performing a coach take-down but they are so slick at it that I never tire of watching them in action.

In closing, a dedicated Gendarmerie Special Operations unit provided the outer cordon during the Army Special Forces and Quick Reaction Force display; I plan to look briefly at them and their Al-Jawad 4×4 personnel carriers in Part 5 of this mini-series.