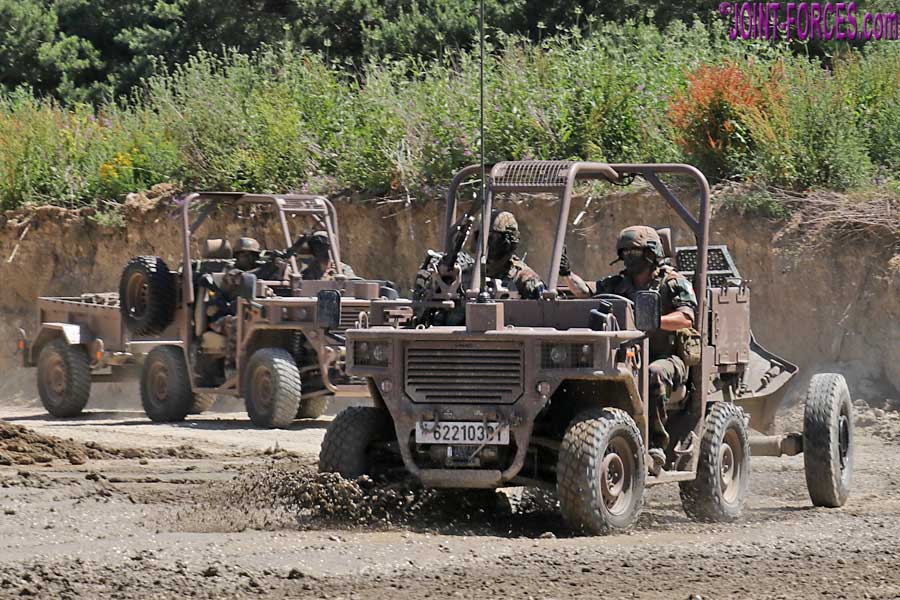 At the Eurosatory 2022 defence and security expo the French Army laid on a combined multimedia presentation and dynamic display of some of their latest vehicles and equipment. Two command post variants of the new VBMR Griffon 6×6 were on static display at the start of the demo but the first Army vehicles to enter the arena were a pair of UNAC RIDER Fardier ATV prime movers.

Fardier is a very old French military term for a horse-drawn dray used for transporting heavy artillery, but the designation has been adopted for the RIDER (Rapid Intervention Droppable Equipment for Raiders) ATV recently produced for the French MoD by UNAC, who are probably best known on the military side for their compact bulldozers and earthmovers. It is believed around 300 RIDER ATVs were ordered for Army Special Forces and 11e BP in 2020. An early example was exhibited at the SOFINS 2021 Special Forces expo, which I was regrettably unable to attend as all flights were cancelled at the last minute due to a pandemic spike, so Eurosatory 2022 was my first chance to photograph this interesting little vehicle. For the Army demo, after film clips were shown of first a GCP team parachuting and then a Fardier with 120mm mortar being air-dropped from an A400M, two of these nimble vehicles drove into the arena towing a 120mm mortar and a UNAC 400kg cargo / ammunition trailer; due to the Parc des Expositions display arena being under a Le Bourget airport flightpath and little more than a couple of kilometres south of one of the Paris CDG airport runways, live aviation displays are unfortunately not possible at Eurosatory).

According to the manufacturer the UNAC RIDER Fardier measures 2600mm long by 1600mm wide by 1900mm high to top of cage and it has 300mm ground clearance. Empty weight is 1000kg with a GVW of 1900kg and either a 400kg payload trailer or an MO-120 RT 120mm mortar (weighing around 600kg) can be towed. A Caterpillar Tier 3 60hp diesel engine powers the vehicle through a 2-speed dog clutch and lockable axle differentials are fitted front and rear. Tyres are 215/75R15 4×4 All Terrain or Mud Terrain, dependent on operational theatre. Neither top speed nor range are quoted on the sales literature.

A 7.62mm general purpose machine gun can be mounted in front of the vehicle commander and, although not shown at Eurosatory 2022, a second weapon can be mounted on the roll cage. The Fardier can be fitted for radio and it has a self-recovery winch. In standard configuration it has just two seats and the rear cargo compartment sides can be folded out to give a larger loadbed. An optionally manned version has already been developed in conjunction with SAFRAN, who also supply air-drop platforms to the French MoD.

Updated with images of the UNAC RIDER prototype displayed at Eurosatory 2018.