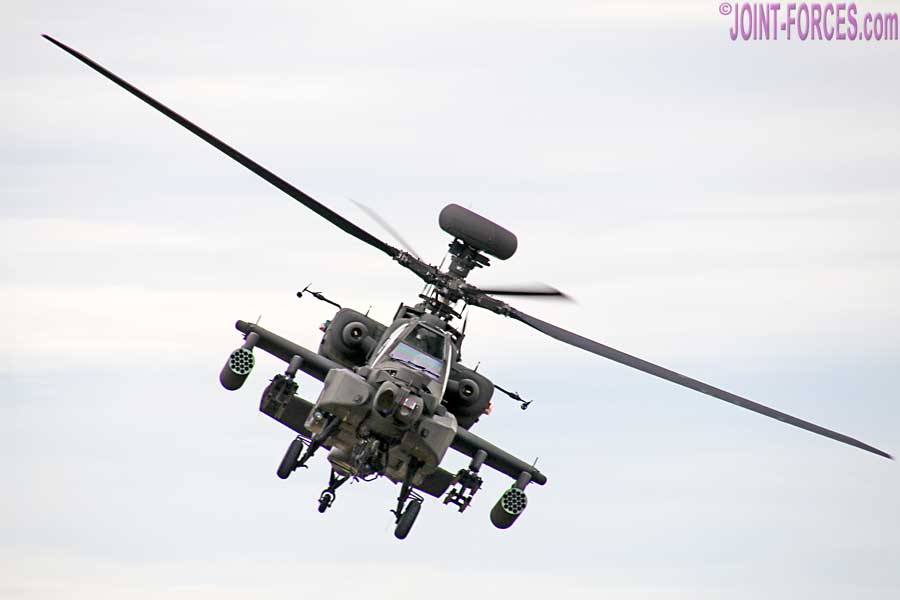 The Army Air Corps laid on two of the remanufactured aircraft, ZM714 (static) and ZM708, for us to photograph to accompany Tuesday’s AH-64E story in the UK News section but as we suspect some readers might be interested in seeing more photographs of the pair we have created this small album.

Procurement of the British Army’s AH-64E Apache Echo model, which is of similar standard to the US Army AH-64E Guardian in its Block 6 version, was announced in July 2016 and the first two remanufactured airframes reportedly arrived in the UK towards the end of 2020. In total 50 of the original fleet of 67 Apache AH-1 helicopters, which in the main were built under licence by Westland at Yeovil using AH-64D kits supplied by Boeing but fitted with Rolls-Royce engines, are being brought up to the latest standard.

Externally there is very little difference between the outgoing AH1 and the incoming Echo, though the sharp-eyed will probably spot a minor addition or two, but inside the cockpits (which on security grounds we were not permitted to photograph) the electronics are a quantum leap forward. Before taking to the skies on Tuesday the OC of 673 Squadron, who is in charge of the conversion training programme at Middle Wallop, explained to us us that though they look the same comparison between the two Apache models is like comparing a Nokia 3210 (launched in 1999 while the now defunct AAC AH-1 Apache was being developed) with today’s very latest iPhone. In addition to the new technology suite, which among other tricks allows other aircrew on the battlefield to engage multiple targets identified by a lone ‘eyes-on’ scout, the Echo also has new composite rotor blades which both allow a heavier payload to be carried at faster speed and are more capable of withstanding hits from anti-aircraft projectiles.

Aircrew from 662 and 663 Squadrons of 3 Regiment Army Air Corps are the first operational units to retrain on the AH-64E and crews from 664 and 656 Squadrons of 4 Regiment AAC are scheduled to convert next, from early 2023. More than two-thirds of the new Apache fleet is now believed to be in service and as a result the aircraft are becoming a familiar sight in the skies over Salisbury Plain and East Anglia.