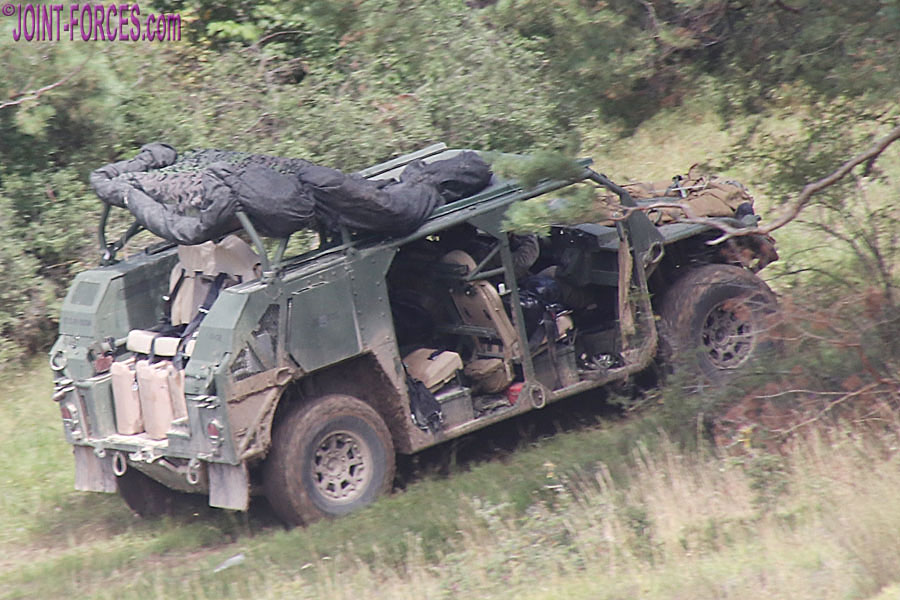 Based on the General Dynamics Flyer 72, originally developed by Flyer Defense of Los Angeles around the cusp of the millennium, the M1297 A-GMV (or AGMV) used by the US Army Airborne formation permanently based in Europe is a very close sibling of the US SOCOM (Special Operations Command) M1288 GMV 1.1, which was ordered in 2013 as a partial replacement for the GMV (Ground Mobility Vehicle) variant of the HMMWV or Hum-vee.

It is fair to say that there has been some confusion over the GMV designation, not just because of this latest US Army use of the term – albeit usually with an A- or A prefix – for what was originally their Ultra Light Combat Vehicle (ULCV) programme but also because US SOCOM uses it for five slightly different SF / SpecOps legacy Hum-vee versions for the different arms of service as well as for almost 1,300 recent replacements (which also carry a 1.1 suffix). To compound matters, SOCOM also procured an initial batch of slightly narrower Flyer 60 variants for testing as V-22 Internally Transportable Vehicles; it would appear these were trialled for essentially the same US Air Force SpecOps role as the GAARV / Storm SRTV.

The M1297 A-GMV was ordered from General Dynamics Ordnance and Tactical Systems (GD-OTS) in May 2018 (see Press Release below) and less than 12 months later the first vehicles made their European exercise début in Croatia with 203 PIR of 173 ABCT on IMMEDIATE RESPONSE 19. We had hoped to catch up with the vehicles and their users during DEFENDER-Europe 20 this spring / early summer, but delays and cancellations to training schedules caused by COVID-19 meant It would be SABER JUNCTION 20 in late August before we had the chance to, albeit briefly, photograph a couple of Flyers in the field.

From my photos of the US Airborne vehicles snapped on Hohenfels Training are during the latest SABER JUNCTION, their ability to transport a squad of nine is obvious even though neither was carrying any more than driver plus four dismounts. In Army, i.e. M1297, configuration the driver sits centrally with seats for two passengers outboard and fractionally behind plus two more on outboard seats just behind them. The other four troop seats are elevated and central, in back-to-back pairs above the rear axle. The earlier SOCOM M1288 Flyers, usually seen with doors and windscreen fitted, are mostly configured with three to five seats and a cargo loadbed at the rear.

In May 2014, the month before the Flyer was formally submitted for the US Army Ultra Light Combat Vehicle (ULCV) requirement, which attracted firm interest from six potential suppliers, General Dynamics released a factsheet which informed: “The Flyer 72 is a non-developmental item, purpose-built, lightweight vehicle designed to meet complex mission sets. Selected by the US Special Operations Command (USSOCOM) as the vehicle of choice for their Ground Mobility 1.1 (GMV 1.1) programme, at 72″ wide it is capable of internal transport in the CH-47 and C-130 aircraft.”

“The Flyer 72 is a mature, highly mobile platform, with a payload capacity over 5,500 pounds and can be configured to multiple crew sizes (up to nine). It is capable of being guns up in under a minute after exiting the aircraft, and can carry a variety of armaments. Its adaptable communications suite provides increased operating range and the provides the operator real-time access to critical information.”

“As a reliable and high performance vehicle, the Flyer 72 offers safe and fast operating speeds with superior levels of mobility and manoeuvrability. It’s highly adaptable to severe, rugged and restrictive terrains while providing off-road, cross-country mobility in all types of weather conditions.”

Measuring, in basic configuration, 4620mm x 1830mm x 1840mm high and able to fit inside a CH-47 Chinook helicopter, the Flyer 72 as proposed for ULCV had a Gross Vehicle Weight of 5080kg, of which payload was 2585kg. A 2.0-litre 195hp GM DOHC Bi-Turbocharged Inter-cooled JP8 Diesel Direct Injection Common Rail Fuel System Euro V engine, through a six-speed Tiptronic automatic gearbox and two-speed transfer case – 4×2 high or 4×4 low – promised a top speed of 153 km/hr (95mph). Chassis was a tubular space frame with integrated roll-cage and a supplemental armour package could be fitted. It is believed that this specification is close to that ordered by the US Army in May 2018.

Press Release,St. Petersburg, 28 June 2018: General Dynamics Ordnance and Tactical Systems was awarded a $33.8 million contract on May 22, 2018, by the US Army Contracting Command, Warren, Mich., for the production of Army Ground Mobility Vehicles (AGMV) and associated kits.

Based on the GMV1.1 vehicle the company is currently delivering to the US Department of Defense, the AGMV configuration carries an airborne infantry squad with a payload capability of over 5,000 pounds. It shares approximately 90 percent parts commonality with the GMV1.1 and meets the same strategic lift requirements. The AGMV’s open design provides the ability to readily modify the vehicle to accept already developed kit configurations such as remote and manned turrets, armour and Arctic kits.

“The AGMV brings the right capability and performance to the Army for their immediate need and future requirements due to its highly reliable, adaptable and versatile design,” said Steve Elgin, vice president and general manager of armament and platform systems for General Dynamics Ordnance and Tactical Systems. “By leveraging the GMV1.1 program, the Army can take advantage of the engineering, development and testing that has already been completed by Department of Defense. This significant time savings, along with the proven performance of the deployed GMV1.1 vehicles, gives the Army the ability to get this urgently needed capability into the warfighter’s hands now.”

Estimated completion of this contract is March 2019.

The GMV1.1 (M1288) and AGMV (M1297) are part of a family of vehicles developed by General Dynamics and Flyer Defense. The family includes the Flyer60 ITV, the Flyer72 Light Reconnaissance Vehicle (LRV) and the newest variant the Flyer72 Tactical Utility Vehicle (TUV).