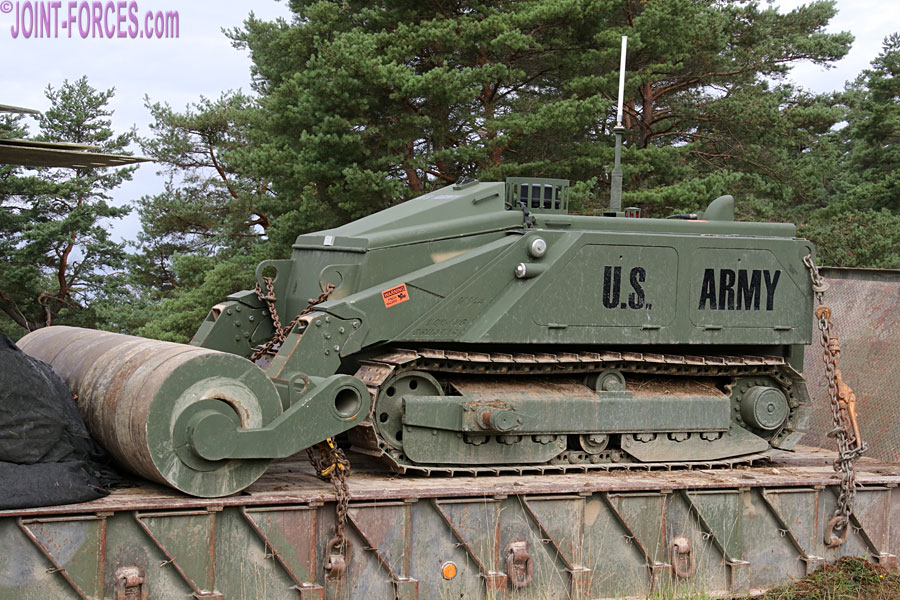 The US Army M160 Anti-Personnel Mine Clearing System, Remote Control or AMCS-RC was procured a decade ago for Afghan Operations.

Designed and manufactured by DOK-ING d.o.o. of Zagreb, a company established in Croatia in 1992 to produce mine-clearing vehicles, the M160 robotic mine-clearance vehicle is an early version of the company’s current MV-4 Scorpion Multi-Mission EOD Robotic System. In addition to seeing close on a decade of operational service in Afghanistan with the US Army designated M160, as the Russian-produced (under a Technology Transfer agreement) Uran-6 variant this medium-sized tracked robot is now operationally deployed with mine and EOD clearance sappers in strife-torn Nagorno-Karabakh.

Dimensionally the M160 version, seen here deployed on Exercise SABER JUNCTION 20 on Hohenfels Training Area in Germany with 54th Brigade Engineer Battalion of the 173rd Airborne Brigade Combat Team, measures 4562 x 1525 x 1480mm high and has a gross weight of around 5.5 tonnes. Fully tracked, with a minimum 8mm thick armoured hull and additional protection around the engine and key components, the machine has easily interchangeable mine flail, roller and dozer blade attachments; the hardened steel flail is the primary mine clearance device, but the M160 I photographed had its roller attached and the flail was carried in a packing crate on the low loader.

Powered by a 173hp Perkins 1106 C-E60 TA 6-cylinder water cooled, turbo-charged diesel engine, the M160 / MV4 moves at walking speed when clearing anti-personnel mines and IEDs and, dependent on soil type, it can clear to a depth slightly in excess of 305mm or 12 inches. Between 950 and 2100 square metres of ground can be cleared in an hour, dependent on terrain and soil type. It can also clear a sloping route on ascending or descending ground of up to 20° or traverse a side slope up to 35°, but when simply travelling it can tackle 10° more. The robot is also able to wade through 450mm of water unprepared, cross a 500mm trench and climb 300mm steps. It can be transported internally by CH-47 Chinook or Mil Mi-17 Hip transport helicopters.

The Russian-built Uran-6 version currently being operationally used by Russian International Mine Centre Teams in Nagorno-Karabakh to clear unexploded ordnance is visually very similar and when we contacted DOK-ING they confirmed that they transferred rights several years ago under a technology transfer agreement. However while the MV4 uses a Perkins engine and Rexroth-Bosch hydraulics, the Russians have substituted locally produced components. On the Croatian-built vehicles the Video Camera System (data communicating using the LEGO principle) is optional but the Russian-built vehicle uses combined data and video communication channels. While the Russian data comms system allows operator control, using fragmentation-protected video cameras, out to 800 metres the MV-4/ M160 version can be further operated out to 3,200 metres distant in LOS (Line of Sight) mode; e.g. if used in tandem with an Unmanned Aerial Vehicle sending back a live video feed the operator could control the Croatian clearance machine from a covert location well out of reach of infantry fire covering a minefield or IED site.

In addition to the US Army, which procured around 40 units designated M160, and Croatia the EOD units of several other armies are documented as operating two or more of the DOK-ING MV-4 including: Australia, Eire, Italy, Nicaragua, Sri Lanka and Sweden. In addition to military customers the United Nations has also procured a small quantity for Humanitarian Assistance work, as have several other Government and Non-Government Organisations.

Footnote: Uran is the robotic sister of Astro Boy in the comic series – a coincidence?