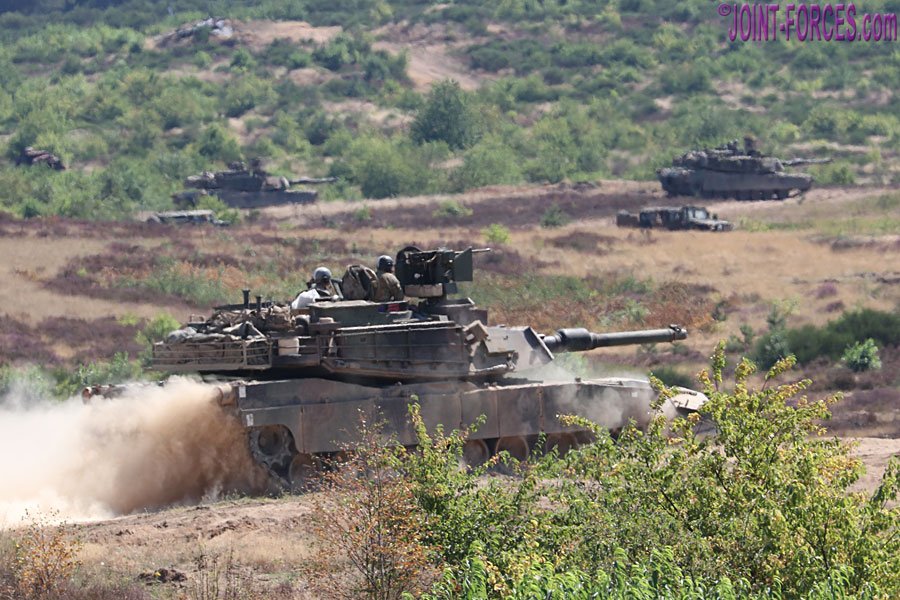 As part of the DEFENDER-Europe 20 or DEF20 Phase II manoeuvres a part of 1st ABCT from 1st US Cavalry Division deployed to Bucierz Range in Poland, reports Bob Morrison.

Over this and the next two articles I intend to look first at the US Army combat team sent over from Texas to participate on the EDRE (Emergency Deployment Readiness Exercise) CALFEX (Combined Arms Live-Fire Exercise) on Bucierz Range at Drawsko Pomorskie Training Area; then at another US Army combat team from Georgia, which is currently on ATLANTIC RESOLVE 6 rotation to Germany but is also exercising on the Polish training area; before finally turning my attention to the armour of 17th ‘Greater Poland’ Mechanised Brigade, which recently worked alongside both of these American ABCT units during live exercises.

First the background story. When originally conceived the DEFENDER-Europe 20 or DEF20 exercise was an ambitious plan to deploy over 20,000 US Army personnel from the Continental United Stated (CONUS) to Northern Europe in the spring of 2020, who would then join up with around 17,000 more troops from USAREUR (US Army Europe) and NATO Allies plus Partner Nations in the largest series of linked field exercises to be held in Europe for more than a quarter of a century….. then COVID-19 reared its ugly head.

On 11th March 2020 the World Health Organisation (WHO) declared the COVID-19 / Coronavirus outbreak to be a pandemic and the very next day the US Army’s European Command formally announced: “After careful review of the ongoing DEFENDER-Europe 20 exercise activities and in light of the current Coronavirus outbreak, we will modify the exercise by reducing the number of US participants. Activities associated with the exercise will be adjusted accordingly and we’ll work closely with Allies and partners to meet our highest priority training objectives.”

Four days later USEUCOM announced that as of March 13 all movement of personnel and equipment from the United States to Europe had ceased and it was also stated the linked exercises DYNAMIC FRONT, JOINT WARFIGHTING ASSESSMENT, SABER STRIKE and SWIFT RESPONSE would not be conducted. However it was anticipated that the Armored Brigade Combat Team already deployed to Europe (for the ATLANTIC RESOLVE shielding mission) would in due course conduct gunnery and other combined training events with Allies as part of a modified ALLIED SPIRIT exercise, though forces already deployed to Europe for other linked exercises would return to the United States.

In mid-May it was announced: “After careful assessment and planning between US Army Europe and the Polish Ministry of Defence, Exercise ALLIED SPIRIT, a DEFENDER-Europe 20 linked exercise, originally scheduled for May, will take place at Drawsko Pomorskie Training Area, Poland, June 5-19.” For more on ALLIED SPIRIT 20, which travel restrictions at the time prevented us attending in person, see these pages:-

It would be July before the pandemic situation stabilised sufficiently, and satisfactory testing and quarantining procedures were established, to allow troop movements across the Atlantic and between other European countries to resume permitting the delayed and truncated DEFENDER-Europe 20 exercise to move into the much reduced Phase II. The ATLANTIC RESOLVE defensive shield rotations were also impacted by the pandemic, but in early July the ARC Endurance Ro-Ro vessel, last seen in February bringing US 3rd Infantry Division armour materiel into Bremerhaven Docks in Germany for the DEF20 deployment, docked in the French port of La Pallice docks in La Rochelle with helicopters and materiel from the Combat Aviation Brigade of the 101st Airborne Division bound for ATLANTIC RESOLVE 6.

The US military machine was moving again and although DEF20 would no longer take place on the same grand scale as the epic REFORGER 90, the revised Phase II linked training exercises would still allow planners and logisticians to exercise strategic readiness objectives; indeed it could well be that when looked at with hindsight the curved balls thrown by the pandemic actually assisted planning processes by casting up drastic situations which under normal circumstances would most likely not have even been briefly considered. However as we are reporters rather than armchair generals, we will leave that topic for others to explore.

Around mid-July 550 US Army personnel, mostly from the 2nd Battalion of the 12th Cavalry Regiment ‘Thunder Horse’, part of the 1st Armored Brigade Combat Team ‘Ironhorse’ of the 1st Cavalry Division, arrived in Poznan in Poland from their Texas base. Your intrepid reporter was invited to cover their arrival, but as this clashed with the arrival of the 101st ACAB helicopters in La Pallice, I opted for a few days on the sunny Atlantic Coast instead. Meanwhile the 1st ABCT Troopers moved 200km north-west to a temporary camp on DPTA to start preparing armour drawn from Army Prepositioned Stocks (APS) in Germany, Belgium and Holland then line-hauled to the massive Polish training area for their forthcoming CALFEX programme with Poland’s 17 Wielkopolska Brygada Zmechanizowana (17 Greater Poland Mechanised Brigade).

Last week I joined US Army Public Affairs at Oleszno, home of the Centrum Szkolenia Wojsk Lądowych or Land Forces Training Centre, and spent the afternoon before the daylight CALFEX on a familiarisation trip around the ranges with one of their Combat Camera Teams. The following day JOINT-FORCES.com joined the Polish mainstream media as their Minister of Defence watched the CALFEX and along with Commanding Officer of 1st ABCT explained the importance of US-Polish military cooperation and joint training.

The armoured live fire advance down the undulating Bucierz range, supported by Apache attack helicopters from 101st ACAB overhead on their left flank, primarily involved what our resident M1 Abrams specialist Carl Schulze has identified as being the latest M1A2C main battle tank variants. Formerly known as the M1A2 SEP (V3) variant, these latest generation tanks were not fitted with ARAT or TROPHY protective measures though six further tanks assigned to the 1st ABCT of 1st Cavalry Division taken from the same APS batch had this new defensive suite fitted at Bergen-Hohne in Germany in July.

Just like most of southern Britain in the second week of August, Pomeranian Poland was basking in a heatwave with the thermometer nudging an unusually high 30°C during the sole daylight CALFEX of the week and dust levels combined with the large safety footprint made photography quite difficult. Fortunately tank commanders and gunners have optics much more capable of dealing with these conditions than even very good lenses on conventional DSLR cameras so the battle run was not impeded, but once the tracks started moving and the guns started lifting copious quantities of talcum-like Drawsko Dust into the air all we observers at the rear could do was peer through the fog of war as the action pushed on downrange. I would not, however, have missed this impressive battle run for all the chilled piwo on tap at Vendetta (the local pizzeria first discovered by us Brits during Exercise UHLAN EAGLE ’96 at Drawsko Pomorskie).

In the next part I will look at the sand coloured US armour which differentiated 2nd ABCT of 3ID from the 1st ABCT of 1 CAV, seen here, who mostly used three-colour European camo scheme armour originally drawn from the APS-2 Zutendaal Work Site in Belgium. For the purists, although traditionally the US Cavalry uses the M3A2 Bradley Cavalry Fighting Vehicle (currently being reworked to an M2 configuration) and the Infantry uses the M2A2 Bradley Infantry Fighting Vehicle, it would appear that the Troopers flown in from CONUS collected a generic APS set of US Army vehicles so used the latest version M2A3 for the CALFEX.

On operational grounds there is likely to be a 10-14 day delay before publication of the second article in this trilogy.

If you came to this page via one of our Social Media pages please Share / Retweet to spread the word. Thanks.