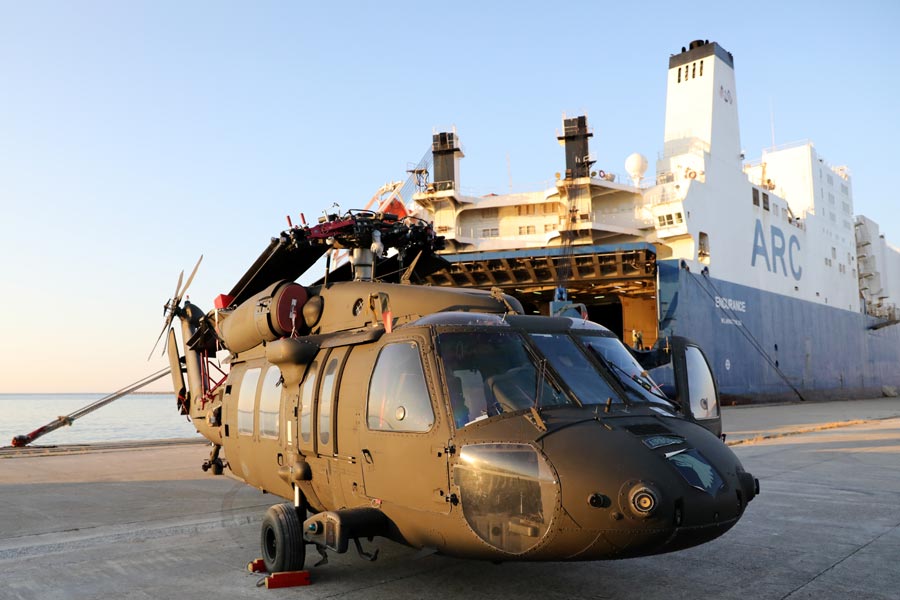 A UH-60 belonging to 101st Combat Aviation Brigade is offloaded from the ARC Endurance and staged at the Port of Alexandroupoli, Greece [US Army: Sgt Jesse R Pilgrim]

The last tranche of 101st CAB (Combat Aviation Brigade) helicopters deployed to Europe on ATLANTIC RESOLVE 6 has arrived in Alexandroupoli in Greece.

The 101st CAB is deployed for nine months as a regionally allocated force supporting ATLANTIC RESOLVE focusing on strengthening bonds between allies and partners, increasing interoperability and building readiness.

After crossing the Atlantic from Jacksonville earlier this month and unloading 63 of the brigade’s helicopters and hundreds of vehicles on La Pallice docks in La Rochelle, the Roll-on / Roll-off vessel ARC Endurance sailed around the Iberian Peninsula and through the Mediterranean to the Port of Alexandroupoli near Greece’s border with Turkey. After arrival on Tuesday (21st) the remainder of the brigades helicopters and vehicles were offloaded by 21st Theater Sustainment Command personnel prior to the final stage of their journey northwards.

Yesterday, Thursday 23rd, Greek Minister of Defence Niko Panagiotopoulos and US Ambassador Geoffrey Pyatt visited the port to talk with 101st Combat Aviation Brigade soldiers about the helicopters they were preparing for onward movement.