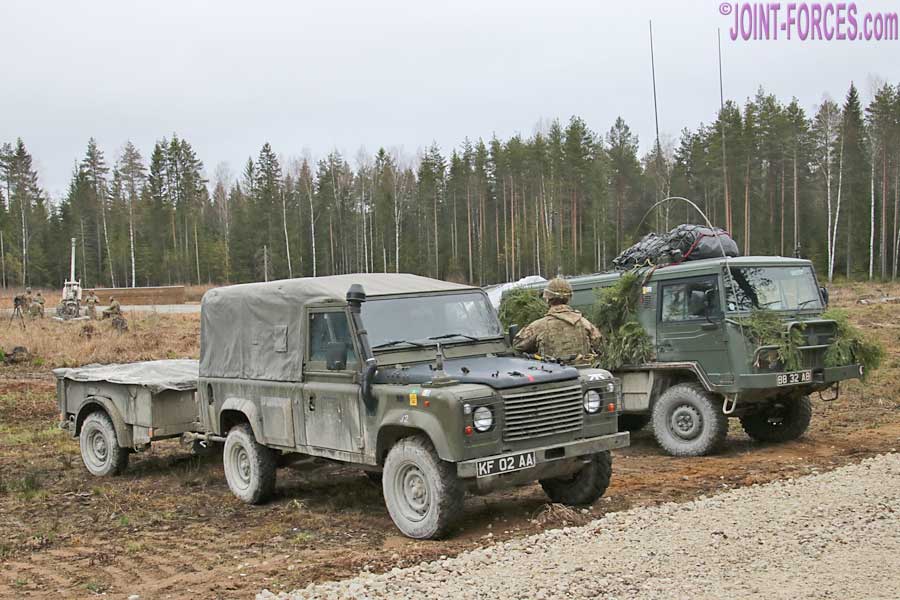 Over 30 years ago, on 6th January 1992, the UK Ministry of Defence issued a Contract Bulletin formally inviting tenders from 19 interested companies for a Truck Utility Light (TUL) and Truck Utility Medium (TUM) requirement.

Only two manufacturers, Land Rover and Steyr-Daimler-Puch, met the MoD requirements and were in due course invited to enter vehicles in the subsequent competitive trials process, with the former being considered for all three payload categories and the latter being considered only for the TUM [HD] category. To cut a long and quite convoluted story short, on 28th July 1994 Steyr-Daimler-Puch (SDP) announced they had been contracted to supply 394 Pinzgauer vehicles in the TUM [HD] category and on 18th January 1996 the MoD announced it proposed to place an order with Land Rover for approximately 8,000 vehicles to meet the Light and Medium Utility Truck (TUL and TUM) requirements; plans to order an additional 65 TUM [HD] Pinzgauers were also announced in the same Press Release.

The first of the Pinzgauers, production of which would subsequently be transferred from SDP in Austria to Automotive Technik Ltd (ATL) in the UK, would be operationally deployed as light gun tractors to the Former Yugoslavia on United Nations service in June 1995 (I know this for fact as I flew into Split on the C-130 Hercules delivering the first one) and the type continues to serve to this day, primarily with Britain’s Rapid Response Forces. Additional small batches of unarmoured Pinzgauers were procured by the MoD, including both hard top and 6×6 versions until around 2007/8. The ATL brand was bought in 2006 by US truck manufacturer Stewart & Stevenson, which then became part of Armor Holdings which was in turn bought by BAE Systems in 2007; as no major military orders were forthcoming, bulk production of the Pinzgauer appears to have ceased after the last of a 6×6 gun towing batch for UK MoD was delivered. As of late January 2022 the UK MoD Pinzgauer fleet (possibly including some VECTOR armoured and 6×6 Trauma Ambulance variants) was believed to total 873.

The UK MoD’s standard Land Rover TUL/TUM HS fleet (appended HS for High Spec or Higher Specification to differentiate from the earlier Ninety and One-Ten derivative models) was mostly delivered into service between 1st July 1996 and late 1998, though supply of modified Winterised Waterproof versions primarily for 3 Commando Brigade would follow on, as would production of the bulk of the separate batch of 800 Defender 130 Battlefield Ambulances also ordered in 1996. Invariably known as Wolf 90 and Wolf 110 respectively, the TUL/TUM HS fleet saw widespread operational deployment almost as soon as accepted for service by frontline units and the TUM / Wolf 110 still serves widely, albeit in reduced numbers, to this day. As of late January 2022 the UK MoD Wolf fleet was believed to stand at 6,410 (probably including the remaining D130 battlefield ambulances and some converted D130 Project HEBE pick-up variants, but not including the 187 R-WMIK and 20 Snatch 2B variants still shown on the inventory). It is believed that most of the roughly 1600 short wheelbase TUL HS, or Wolf 90, fleet were cast and I do not believe I have photographed one of these deployed in the field since around 2006.

In the title of this article I used the word doldrums, which comes from a term used by sailors of old to describe the often flat calm inter-tropical convergence zone around the equator where both wind and time appeared to stand still. With the Pinzgauer now out of production for almost 15 years and the specialist Wolf, aka TUL/TUM HS, version of the Land Rover not having been produced for over 20 years, and even production of the base model Defender from which the Wolf was derived in the mid-1990s having ceased over six years ago, not only is time standing still for the UK Forces utility vehicle fleet but availability of OEM (Original Equipment Manufacturer) parts and potential safety/reliability issues rising from using non-genuine or ‘spurious’ mechanical driveline parts are raising concerns. With early TUM [HD] i.e. Pinzgauer and TUM HS i.e. Wolf 110 now being expected to remain in service until 2030, way over double their original projected in-service lifespan of 15 years, possibly doldrums is too gentle a term to describe the situation.

Over the last few years many armies and armed forces have started to introduce slightly militarised versions of modern commercial Pick-Up Trucks or their 4/5-door Sports Utility Vehicle (SUV) variants for rear echelon units or for training use while providing smaller numbers of effectively custom-built heavily militarised specialist lightweight 4×4 vehicles for those of their rapid reaction forces whose roles would not normally expect them to use much heavier and bulkier protected patrol vehicles. For much of the last two decades, primarily as a cost-cutting measure, UK Forces have had to use contract leased / hired ‘White Fleet’ civilian specification light 4×4 vehicles such as pick-up trucks for many routine duties, even though contract clauses usually prevent these being driven off-road. While this has no doubt helped extend the life of the Pinzgauer and Wolf fleets it has neither encouraged their manufacturers to keep production running nor maintained a sufficiently large pool of vehicles to ensure reasonably priced spare parts availability.

Consequently, it now appears that to keep the teeth arms equipped with suitable vehicles UK MoD is about to procure a fleet of a few hundred modern military specification medium utility vehicles which will quite possibly have to be almost hand-built and will thereby be much more expensive than slightly militarised bulk-produced previous generation 4×4 utilities like the Land Rover or its Mercedes-Benz G-class (formerly known as G-wagen) rival.

With changes in the wind, the biennial DVD (Defence Vehicle Dynamics) expo at Millbrook scheduled for late September might be an even more interesting show than usual.