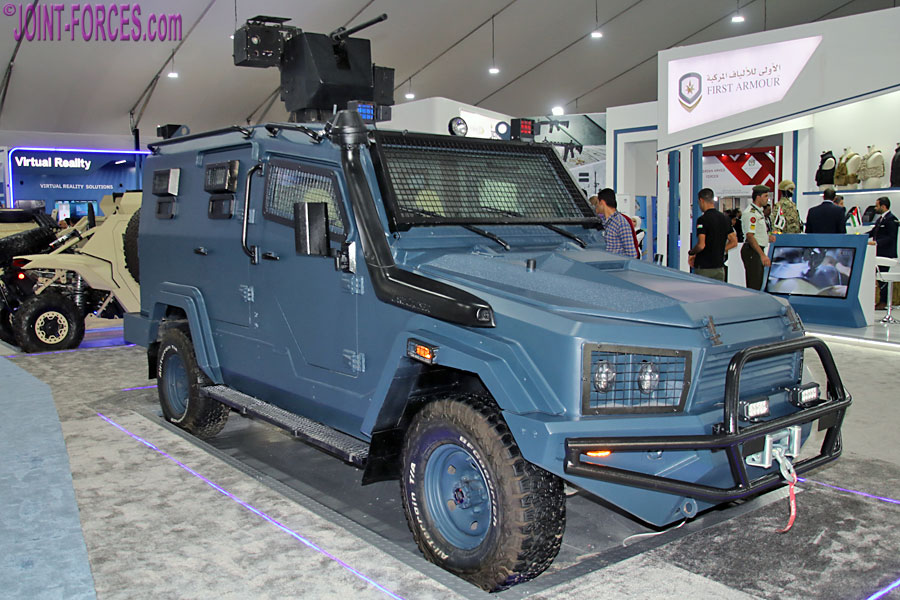 First briefly seen in three-door prototype form on the KADDB (now JODDB) stand in the Jordanian marquee at SOFEX 2018, before an unseasonal overnight heavy rainstorm which caused problems with the electrics forced its early closure, the Al-Maha debuted in production standard four-door (2x front + side + rear) format at SOFEX 2022.

Although the design work was undertaken by JODDB, its subsidiary JLVM (Jordan Light Vehicle Manufacturing) is the constructor of what is essentially a down-sized Al-Jawad equivalent aimed at internal security operations in built-up areas where the larger vehicle can sometimes be less manoeuvrable and a little too big. The new fourth door, in the right side of the reworked passenger compartment behind the commander’s front seat, provides an alternate means of fast exit for the four (originally six) inward-facing dismounts in the rear and this has resulted in the loss of a fifth rear seat.

A 12.7mm (.50cal) Remote Weapon Station, operated from a swing-out control panel mounted on the left side of the rear compartment hull, accounts for the lost sixth seat. This RWS is most likely produced by JODDB subsidiary JordanAMCO, who make the in-service Snakehead cupola used on Al-Jawad ~ see 12th AWC KASOTC Special Operations Display ~ Part Five.

Weighing 5500kg, half a tonne more than the 2018 prototype, the Al-Maha is based on a Toyota Land Cruiser 79 chassis with upgraded leaf and coil spring suspension and gas struts. Measuring 5420x2285x2350mm (to top of hull) the vehicle has 230mm of ground clearance, approach and departure angles of 37° and 30° respectively, a 60% gradient can be tackled and a 39% side slope is manageable. Powered by a 195hp diesel engine through a five-speed manual gearbox, it has a claimed maximum road speed of 120km/h and maximum range of 1000km. Armour protection against pistol and rifle fire is BR6.