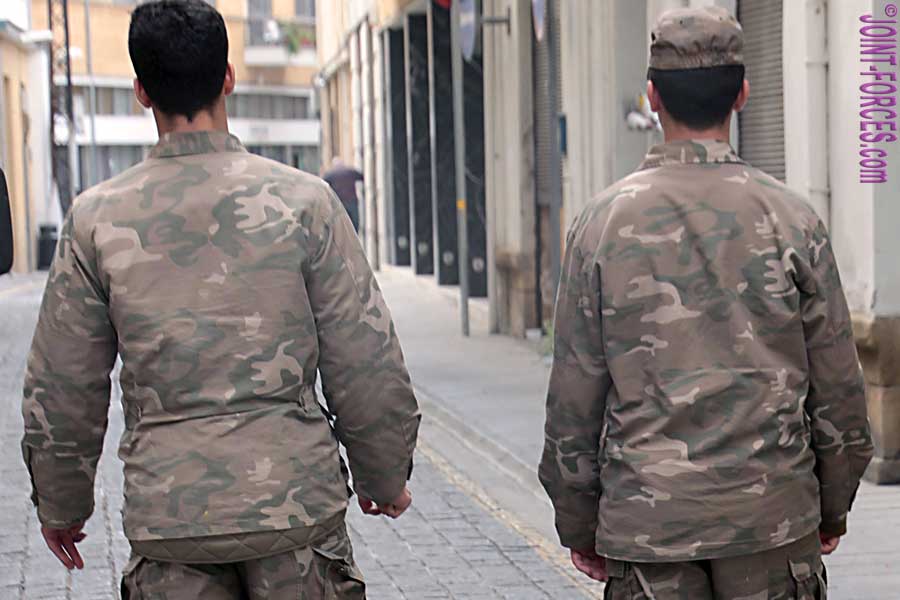 Cyprus, according to mythology the birthplace of Aphrodite, Goddess of Love, is a beautiful Eastern Mediterranean island torn asunder by sixty years of conflict. However this brief uniform feature is not the place to expand on the divisions between the communities, so we will just concentrate on the camo pattern adopted around 2012 by the army on the southern side of the ‘Green Line’ which bisects the isle; I plan to briefly look at uniforms worn on the northern side in my next K&C article.

This feature, adapted from one penned for the defunct COMBAT & SURVIVAL Magazine back in 2013, was prompted by me photographing a Cyprus National Guard team from the elite 33 Special Forces Battalion at KASOTC for the 12th Annual Warrior Competition. These guys, like many of the world’s Special Forces and Special Operations Forces, were wearing MultiCam (see bottom of page) but talking with them about their homeland reminded me that I had photographs of the standard issue Cypriot camo in my archive.

My first chance to see CNG (Cyprus National Guard) camo uniform garments up close came during a British Army Op TOSCA (the UK operational name for the UNFICYP mission) pre-deployment exercise with a Royal Logistic Corps contingent in the UK in early 2013. For this exercise a small number of role-players were dressed in authentic uniforms worn by troops from both sides of the demarcation line to add authenticity to training serials. The following year, when out on the island to photograph Land Rovers at a public parade on the Turkish side of the Green Line, I managed to persuade a couple of CNG troops out on the street of Central Nicosia on the Greek-Cypriot side to let me photograph them for the record; photography of soldiers from either side at their posts along the demarcation lines is strictly prohibited, so that was the best I could manage at the time.

The Cypriot National Guard, which is comprised solely of ethnic Greek Cypriot conscripts and volunteers, is the Army of the southern part of the island officially known as the Republic of Cyprus; the Turkish sector in the north is known, logically, as the Turkish Republic of North Cyprus or TRNC, though internationally only Turkey recognises it as a separate state. From the late eighties the Cypriot National Guard, formed in 1964, wore Greek style camouflage uniforms, a variation of the French ‘Lizard’ pattern, which emphasised their close ties with the Greek motherland, but around 2003 a new camouflage was introduced which was more elongated amoeba-like in pattern.

Printed on an olive drab material which formed one of two secondary colours, the other being a washed out green, the new style CNG camo was primarily Light Earth in colour with a tertiary Dark Earth over-printed as the fourth shade to give it depth. The first uniforms were manufactured on the island, with a JET manufacturer’s label confirming this, but early in the last decade production shifted to the Weifang Eryin Textiles Printing & Dyeing Co. in China and these uniforms now carried the Cypriot National Guard logo of a double-headed griffin in a shield; this pattern is sometimes referred to as 4-colour Emblem to differentiate from the original 2003 camo.

Although the Greek Cypriots designed their own camouflage pattern, their standard uniform design drew heavily on the BDU (Battle Dress Uniform) worn widely by US Forces for two decades from the early eighties until the early years of the current millennium. Our CNG combat shirt used for the detail shots is in size XL and was unworn when our facilitator ‘Sniper John’ procured it for his collection, even still having tailor’s chalk lines on some buttonholes. I compared it with an old US BDU shirt from my props wardrobe and could find few major tailoring differences.

Essentially of typical 7-button shirt design, though the Cypriot National Guard usually undo or remove the top button to wear the neck open and pressed into shape, it was manufactured from an 80/20% cotton polyester rip-stop fabric. The front buttons were of the concealed type, the cuffs were tab & button style with a second button to draw them in at the wrist if needed, and there was a similar tab and 2-button arrangement at each side of the waist to shape the garment. Intended for wear over the trousers, rather than being tucked in, the shirt had two vertical half-bellows chest pockets and two single side-bellows lower cargo pockets. Elbows were reinforced with a rectangular patch of the main fabric and there were four ventilation eyelets under each armpit.

When I photographed the two CNG soldiers in Nicosia on a grey and autumnal day in October 2014, they were wearing padded liners underneath, as is evident in the lead photo of this article.