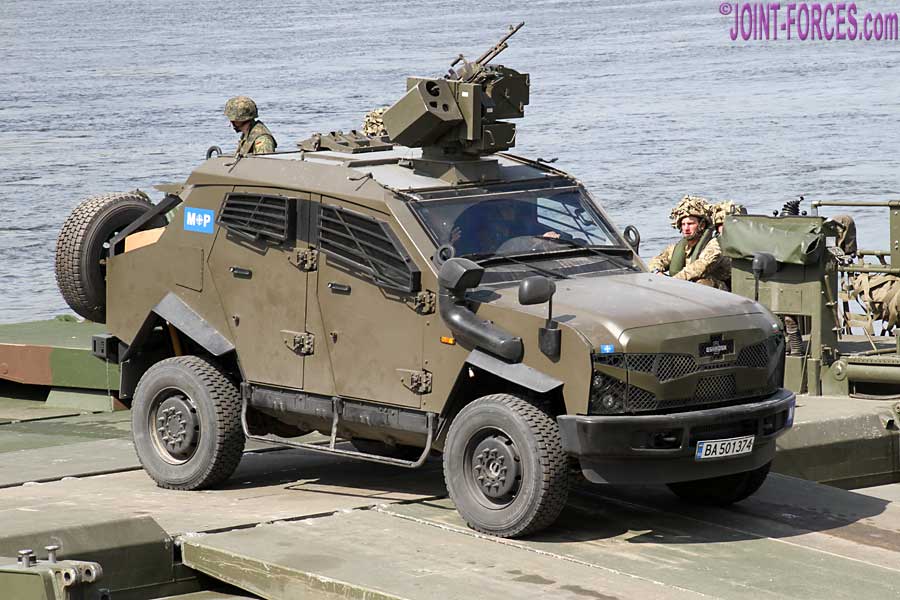 The Plasan / Oshkosh SandCat is a small armoured personnel carrier on the Ford F-series pick-up chassis in service with the Bulgarian Military Police, writes Bob Morrison.

What we now know as the ‘SandCat’ was originally conceived as the ‘Caracal’ around 2005 by the then Plasan Sasa for a specific Israeli Defence Force requirement and was first exhibited overseas in June 2006, on static display at Eurosatory in Paris and then at Defence Vehicle Dynamics at Millbrook Proving Ground two weeks later where I had the opportunity to photograph it away from its stand.

The original version (see foot of this page) was a compact light armoured vehicle vehicle based on a shortened wheelbase Ford F-350, designed to replace ageing Jeep-based lightly armoured vehicles used for border patrols as well as street patrols in Israeli built-up areas where a very tight turning circle was a necessity. Most subsequent versions (which were and are marketed as the SandCat to avoid confusion with an Iveco armoured vehicle being promoted as the Caracal) used a slightly shortened version of the larger Ford F-550 chassis as their base; the very latest Generation 5 version, however, has a monocoque design but still uses F-series running gear.

The Bulgarian MP vehicles, which Carl and I first encountered in 2016 during the Polish invitational Exercise ANAKONDA and I later photographed at Bordușani in Romania during the NATO multinational Exercise SABER GUARDIAN 2018, are Generation 2 SandCats. Ordered in 2008 and delivered around the start of 2010, they were produced for Plasan in the United States by Oshkosh. Two different body styles are currently in service in Bulgaria, 5-seat Utility with a small rear cargo area and 8-seat Transport, with a fully enclosed armoured body; I have photographed the Utility version deployed on exercise with both a crewed 7.62mm machine gun turret and a remote weapons station.

Since its inception the SandCat has evolved continuously, with over 700 vehicles now in service according to the latest company sales literature, and as a result of its ongoing development it is difficult to be precise about the specifications for particular batches so I am not going to attempt to guess about the Bulgarian batch. It does not help that during the first few years of production, understandably as they were promoting the vehicle family for home sales in a highly security-conscious region, Plasan themselves were not particularly forthcoming about specification details and the sales literature produced by Oshkosh was geared towards specific non-Israeli defence procurement requirements they were hoping to fulfil. What we do know, however, is that the Bulgarian vehicles have the Ford 6.4L diesel engine as this was stated (in Bulgarian) on a fact sheet displayed beside the vehicles I snapped at HEMUS 2022 in Plovdiv.

In addition to the Military Police, Bulgaria’s elite SOBT (СОБТ – Специализиран Отряд за Борба с Тероризма) Specialist Anti-Terrorism Team which is part of the Ministry of the Interior but mostly consists of highly experience former soldiers, also use the SandCat. SOBT displayed one of their vehicles, a different example each time, at both HEMUS 2020 and HEMUS 2022 and allowed me to photograph it; this year two of the Operators agreed to pose for us alongside their vehicle (with faces obscured, of course) and they confirmed for our camo buffs their uniforms are Crye Precision MultiCam garments.

When looking back through my archives for an original Plasan Sasa ‘Caracal’ photograph at DVD 2006 I realised that I also have 2009 photos of the Generation 2 SandCat SOV and SandCat Transport on file, as well as a 2010 shot of a Generation 3 Oshkosh-built SandCat alongside an Oshkosh M-ATV (predecessor to the Oshkosh JLTV). I also have a couple of photos of a more recent Generation 3 Polish MP SandCat (aka Raccoon) Ambulance snapped at MSPO in 2020 and a shot of the new SandCat Stormer as displayed at Eurosatory 2022, which I plan to use for a supporting article in the not too distant future. Hopefully our military vehicle enthusiast readers will find our Bulgarian SandCat photos of interest.