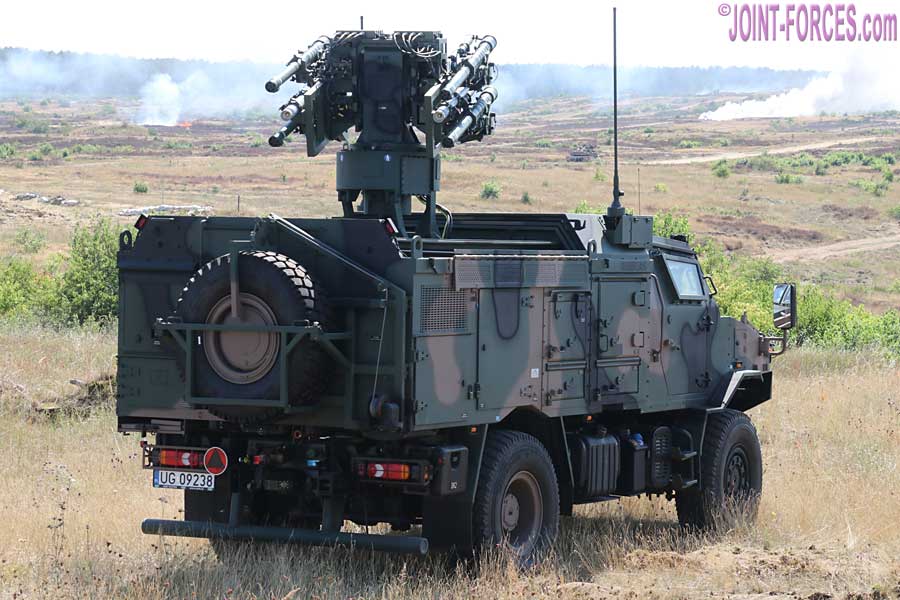 Based on the AMZ Żubr 4×4 Infantry Mobility Vehicle and sporting a pop-up quadruple PZR GROM / PIORUN anti-aircraft missile launcher, the POPRAD is an entirely Polish system ordered in 2015 and now believed to be fully operational.

Almost 80 POPRAD vehicles were procured, with an intended in-service date for the full batch by the end of 2021, but last summer the Polish Defence Minister announced that 36 units would have been delivered by the end of 2019. It is intended that these high mobility 4×4 armoured vehicles will primarily be attached to mechanised infantry battalions equipped with the KTO Rosomak 8×8 wheeled Infantry Fighting Vehicle, operating either independently or as part of a SHORAD (Short Range Air Defence) battery providing area defence for a battle group though linked command & control.

Capable of engaging low-flying aircraft and helicopters out to at least five kilometres with current generation GROM missiles, the system has a maximum height of 3,500m or 11,300 feet but if upgraded PIORUN missiles are fitted instead both of these limits would be extended. For those unfamiliar with PZR GROM, this is a MANPADS (Man-Portable Air Defence System) missile developed by Poland to replace the licence-built Soviet Strela-2M / SA-7 Grail shoulder-launched missile following the dissolution of the Warsaw Pact.

The Żubr (the name translates as Wisent or European Buffalo) base vehicle is produced by AMZ of Kutno and uses Iveco running gear. GVW is around 15 tonnes and top road speed is given as 100km/hr. The vehicle has a V-shaped hull for mine protection and the crew compartment is believed to offer ballistic protection against 12.7mm rounds. The 360° multiple launcher can be lowered inside the rear body and a sliding roof turns the silhouette into that of a conventional 4×4; reload missiles are carried in a locker in the left body side.

As the two POPRAD vehicles seen at Drawsko Pomorskie this week were on a live range and facing away from my camera position on the forward edge of the safety box I was unable to take walk-round images, but the manufacturer’s publicity shots should fill in some of the missing detail. If any of our military modeller viewers are using this brief article for reference, be aware that the AMZ photos are possibly of a demonstrator and there are minor differences on the production vehicles.