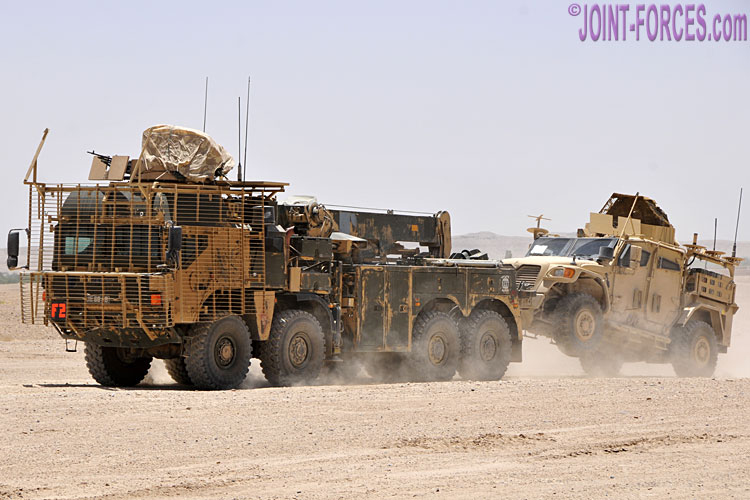 In this final article covering the MAN Support Vehicle in UK service we look at the Winterised / Waterproofed and Urgent Operational Requirements versions, writes Carl Schulze.

Winterised / Waterproofed: Quite a number of SV variants are available in a winterised and waterproofed configuration primarily, but not exclusively, for use by 3 Commando Brigade. These vehicles are fitted with a factory installed kit that allows them to operate in temperatures down to -46°C and to be capable of fording water obstacles up to 1.5m deep after preparation.

The kit includes a 4kW cab heater and 10kW water heater, the latter heating engine coolant, transmission oil pan and batteries for Arctic use. Fording capability is increased by a venting mechanism. Externally the ‘Winter Water’ variants are virtually identical to standard versions, but they can usually be identified from the front by a small blue over red rectangular badge, printed with a letter A above a letter B, beneath the windscreen on the driver’s side. This badge is used to indicate whether or not the vehicle has been prepared for deep wading; this simple marking system developed by ATTURM (Amphibious Trials and Training Unit Royal Marines) has been used on waterproofed Land Rovers and trucks since at least the 1950s.

These vehicles were required by British logistic assets deployed to Iraq and Afghanistan to replace the Leyland-DAF DROPS and Foden IMMLC DROPS trucks, that had problems coping with the environmental conditions and meeting operational demands. The EPLS trucks are fitted with a MSH165SC EPLS Mk 2 Load Handling System supplied by Cargotec Corporation. The system incorporates a Container Handling Unit.

Project FORTRESS: In order to improve crew survivability, under Project FORTRESS those SV trucks deployed to Iraq and Afghanistan were brought up to Theatre Entry Standard (TES) utilising UOR funds. Initially, 280 SV trucks of different kinds were modified in 2008-09.

Fielding of the first 36 SV trucks modified under Project FORTRESS started in Iraq in May 2008, with some 50 vehicles deployed in Afghanistan in late 2008. Another 113 vehicles were upgraded to TES up to late 2010. A further upgrading of components fitted to vehicles under Project FORTRESS resulted in Theatre Entry Standard 2 (TES 2), with the initial version now being referred to as TES 1.

At Least 20 Years: With the MAN SV truck procurement the British Armed Forces received a fleet of reliable, extremely capable and durable trucks with high load capacities that can be employed on and off-road, including over difficult terrain, as well as under any climatic condition. The vehicles feature state-of-the-art technology and have a rather small logistic footprint due to the fact that the HX and SX variants share a large number of common components. The fact that vehicles use many components from the MAN civilian truck range reduces spare part costs and benefits spare part availability.

The UK MoD bought a 20-year support package with the SV, which runs from the delivery date of the final vehicle. Therefore it is almost certain that these vehicles will form the backbone of the British Armed Forces truck fleet until at least 2034, and possibly well beyond this date.