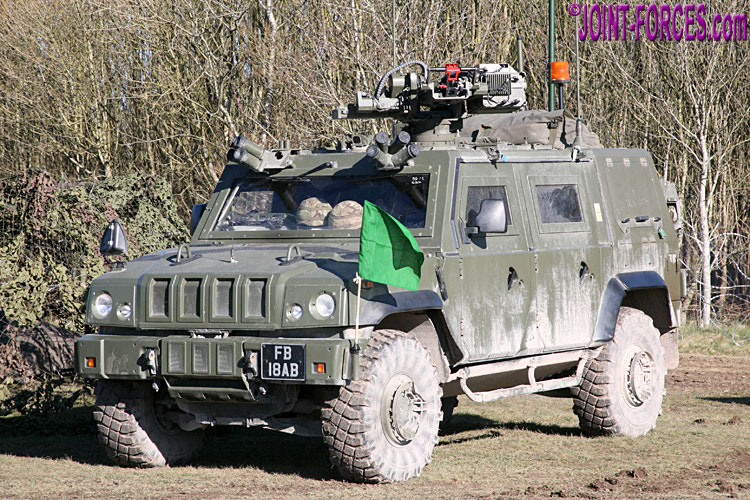 In my previous article on the PANTHER Command and Liaison Vehicle we looked at the prototype in 2003 but the 2008 in-service version was a little different, writes Bob Morrison.

Born out of the Future Command and Liaison Vehicle programme, PANTHER CLV was conceived as a lightly protected replacement for some of the ageing FV430-series, CVR(T) family and Armoured Land Rover vehicles fielded by the British Army and RAF Regiment.

In standard configuration the CLV only features very basic STANAG 4569 Level 1 protection; i.e. it is able to protect against 7.62x51mm and 5.56x45mm NATO Ball ammunition at 30 metres, hand grenades and other small anti-personnel explosive devices detonated under the vehicle, and 155mm High Explosive shrapnel at 100 metres. However the Iveco LMV design upon which PANTHER is based allows for composite armour panels to be fitted discreetly between the outer and inner skins of the main crew compartment, or citadel, to increase protection to STANAG 4569 Level 4 to defeat 14.5x114mm Armour Piecing rounds, a 10kg anti-tank mine underneath the vehicle, and 155 mm High Explosive shrapnel at 25 metres. The Italian Army deploys the STANAG 4 Iveco LINCE version fitted with British-supplied armour kits and, as we will see in the next feature on this vehicle type, the UK MoD up-armoured some of its new PANTHER fleet for operational service in Afghanistan.

With a combat weight of just 7.2 tonnes when armoured to STANAG Level 4, PANTHER is not and was never intended to be a large vehicle; it was, after all, primarily conceived as a replacement for the likes of the Ferret Scout Car, the CVR(T) Spartan and Armoured Land Rovers which were themselves pretty cramped. According to documentation released by Alvis Vickers when the FCLV order was signed, overall dimensions were 4687x2050x1950mm to top of roof and ground clearance was a healthy 473mm under the belly plate. Although in theory PANTHER could have been configured to seat five, with their kit being carried in the unarmoured rear cargo area, as a Command Vehicle it needed to be configured to accept the problematic, heavy and overly bulky BOWMAN communications package inside the protected crew compartment. Some say this was the vehicle’s Achilles Heel which probably led to the fleet being advertised for sale by the UK Defence Equipment Sales Authority in 2018 despite it only being ten years old. Similarly, most of the Land Rover Defender 90 Wolf fleet was demobbed long before its OSD (Out of Service Date) as, unlike previous comms packages which could easily fit in short wheelbase Land Rovers, BOWMAN could not fit in the Wolf 90 either as there would be no room for even one operator in the back.

I first encountered the production version of PANTHER CLV at an Urgent Operational Requirement Day on Salisbury Plain in September 2008, to which both Industry and Media were invited, where a single example of the new vehicle made a brief appearance in the display area. PANTHER FA54AB was configured with an ENFORCER Remote Weapon Station with L37A1 7.62mm General Purpose Machine Gun and two forward-facing quadruple barrel smoke dischargers. The antennae array showed it was BOWMAN equipped and the yellow warning stickers behind the rear side doors confirmed this. Unfortunately this vehicle was not in the static line-up at the end of this display so I have no right side photos.

The next time I spotted PANTHER, vehicle FA63AB this time, was at a Firepower Demo on Salisbury Plain in April 2009 where a lone example was on static display. Some UK MoD media minders go apoplectic if they think stills photographs might possibly be taken of vehicle interiors and even though the doors were open to allow military visitors from home and abroad to have a good look inside I was warned in no uncertain terms to stay to the front of the line-up. I therefore have no rear photos of this vehicle. As can be seen, no machine gun or antennae are fitted, which suggests to me it had been taken out of storage for the day. Interesting, at the next day’s demo to which media were not invited another PANTHER was displayed but this was a reworked STANAG Level 3 version – of the type “on route to the Middle East” according to the caption of an MoD photo now available under Open Government Licence. I plan to look at this modified Protected Command Vehicle version in a follow-on feature.

Other than the lone vehicle FC37AB – see further up this page – which put in a brief appearance at the 11 Light Brigade pre-HERRICK media day in July 2009, I would not get the opportunity to photograph PANTHER again until Exercise RYS / BLACK EAGLE 14 in Poland. For this binational exercise, held on the Świętoszów training area in November 2014,a full squadron of British Army Challenger 2 main battle tanks joined a Polish Leopard 2 cavalry brigade and at least two PANTHER CLVs were deployed in liaison roles. The above vehicle, FB50AB, was in the static display but at least one other was involved in the command and communications role during the mass attack finale by the brigade. A British Army info sheet stated: “Panther is an all terrain protected mobility vehicle with a mounted remote weapon station. It is used by commanders, sergeant majors and liaison officers in armoured, armoured reconnaissance and armoured infantry units. This protected vehicle is also used as a commander’s vehicle for engineer troops, anti-tank, mortar and supporting platoons.”

The rail movement phase of Exercise TRACTABLE 15 gave me an opportunity to take some walk-around photos of a couple of standard PANTHERS. This pair are not fitted with machine guns or antennae, and both jerrycans and fire extinguishers normally carried on the rear have been removed to thwart the light-fingered, but otherwise they appear to be standard. The PANTHER in the lead image, FB18AB, was of similar configuration and spotted on Salisbury Plain during Ex. TRACTABLE 16; several other PANTHERS took part in this logistics exercise designed to practice moving a Division’s worth of vehicles.

Exercise TRIDENT JUNCTION 15 in Spain in November gave me a chance to photograph both the standard configuration PANTHER, which was operating out on CENAD Chinchilla ranges as a liaison vehicle with a Spanish formation, as well as an opportunity to photograph an upgraded Protected Command Vehicle (which I plan to cover in the next article). The PANTHER I spotted with the Light Infantry as they deployed through Poland in March 2017 at the start of the NATO eFP mission, known as Operation CABRIT to UK Forces, was also standard configuration. In this photo it is parked up for the evening halfway through the route march with the US 2nd Cavalry and unfortunately I did not get the chance to photograph it on the road.

PANTHER CLV also operationally deployed with the UK-led NATO eFP Battle Group in Estonia in 2017 and I was able to photograph at least three during the LIVEX phase of the multinational Exercise KEVADTORM 17 in May of that year. One vehicle served as the BG EST commander’s vehicle and others worked as communications and liaison vehicles with the French infantry company serving under British command; the French contingent used the much smaller and ageing VBL as their liaison vehicle.

In addition to Italy and Britain several other armies, including even the Russians, use Iveco LMV derivatives. By 2019 Belgian had swapped with France as the second contributor to the UK-led Battle Group Estonia and during Exercise KEVADTORM 19 I had the opportunity to photograph a Belgian LMV working alongside a British PANTHER in the liaison role. Externally, other than RWS and smoke dischargers, the differences are minimal, though the hidden STANAG protection levels may well be very different.

For my next article on this theme I plan to focus on the PANTHER variant upgraded specifically for frontline service on Operation HERRICK.