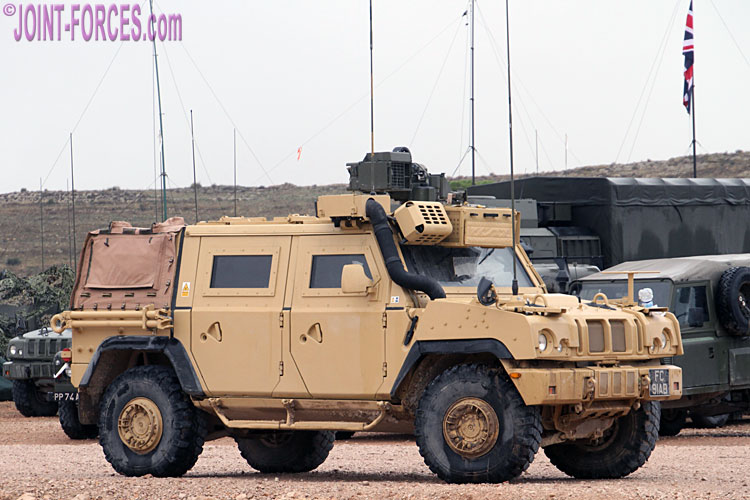 The PANTHER CLV, covered in my previous article, had hardly entered service before part of the fleet was modified as the PANTHER Protected Command Vehicle, writes Bob Morrison.

History has shown it often takes a good war, or in recent years a bad war, to wake up the UK Defence Procurement behemoth and coax it into action; in the case of PANTHER it was Afghanistan and an Urgent Operational Requirement for the fielding of better protected vehicles which was the alarm call.

When requirements were originally drawn up for the smallest vehicle in the British Army’s Future Family of Light Armoured Vehicles or FFLAV project at the end of the 1980s, a requirement which later evolved into the Future Command and Liaison Vehicle or FCLV project around the start of the new millennium, terms like Corporate Responsibility, Risk Aversion and Asymmetric Warfare were not particularly high on the agenda for politicians or public servants and spending money on highly protected armoured vehicles which quite possibly might never be used was definitely not a main priority for those in charge of the national purse strings. Consequently, when the FCLV contract was eventually awarded in 2003 it was for a reduced quantity of comparatively cheap vehicles, effectively expensive replacements for Land Rovers, which offered only very basic STANAG 4569 Level 1 protection against bullets and shrapnel rather than much more expensive STANAG 4569 Level 3 or 4 versions which could stand up better to the actual threats which were being encountered when a Command and Liaison Vehicle was desperately needed by troops on the ground in Afghanistan around the time it was accepted for service in June 2008.

In addition to the original FCLV contract for £166million awarded to Alvis Vickers in 2003, the UK MoD awarded another £28million support contract to BAE Systems (who now owned Alvis Vickers) in the same month that PANTHER entered service and at a time when 217 out of 401 vehicles had been delivered, with the remainder “scheduled to be delivered by summer 2009”. According to a company press release issued at the DVD 2008 expo: “The contract requires that BAE Systems provide 90 per cent availability of materiel plus technical support services to the front line, including BAE Systems’ own field support technicians deployed with Army units in UK, Germany & BATUS, the British Army training area in Canada.”

These roughly £480K apiece vehicles (395 of which JANES reported in 2018 were being offered for sale by the UK Defence Equipment Sales Authority) were originally intended to have an OSD (Out of Service Date) of 2030, similar to the 1997 vintage Land Rover Defender Wolf 110 TUM HS fleet, but even before the full PANTHER batch had been delivered it was realised they were unsuited for operational deployment in a combat theatre where the landmine and powerful IED (Improvised Explosive Device) were the weapons of choice for the enemy. Therefore shortly after the 2008 ISD (In Service Date) another contract was awarded to BAE Systems under the UOR (Urgent Operational Requirements) process to bring one in six of the new PANTHER fleet up to Theatre Entry Standard (TES) for Operation HERRICK in Afghanistan. One of these modified and up-armoured vehicles appeared at the April 2009 British Army Firepower Demo on Salisbury Plain, where it was photographed by an MoD photographer, though curiously the previous day when the specialist defence press were admitted to the demo only a standard NATO Green PANTHER CLV was present, in the static display area (see last article for front photos) and media were dissuaded from taking photos from the rear. The caption for the two MoD images taken on 3rd April, and later made available under Open Government Licence, stated: “The version seen here during a demonstration is of the same design as those already on route to the Middle East [sic].”

The following month, May 2009, the UK MoD issued a News Release stating: “The first batch of a fleet of versatile, protected vehicles has been delivered to troops on operations, complete with the latest battle-ready upgrades. Weighing over 7 tonnes, the PANTHER Command and Liaison Vehicle (PCLV) is fitted with the latest high-tech developments, including a remote-controlled weapon system that allows the user to operate a machine gun with a camera and joystick from inside its turret. It can operate in all weather conditions, day and night using thermal imaging equipment that ‘sees’ in the dark and the vehicles are protected against a range of threats including small arms, blast and anti-personnel mines.” [Yes, we know, the RWS operator actually sits in the vehicle and not ‘inside the turret’, but we don’t write MoD fact sheets.]

That MoD release also stated: “PANTHER, which was delivered to 1 Mechanised Brigade for training last summer, has undergone design adjustments following a series of hot weather trials to make them ready for operations in Afghanistan. These include: rear view camera for improved situational awareness; protected engine compartment; the addition of a fourth crew member; theatre-specific Electronic Counter Measures (ECM). The vehicles will be first used by both the RAF Regiment and the Army’s Close Support Logistics Regiment. More vehicles are en route to theatre later this month for deployment on the frontline.” [We would have described the reported £20million or £300,000 apiece conversions as major upgrades rather ‘design adjustments’, but we don’t write MoD fact sheets.]

BAE Systems also issued a Press Release on the UOR upgrade contract, the day after the MoD issued its release, which confirmed: “PANTHER has a number of design features to provide crew protection against mine blast and other attacks, including a sandwich-construction underhull, sacrificial front and rear ends and wheels set well away from the crew compartment.” As for the up-armoured version, the company release stated: “The TES PANTHER has also been modified to a four-seat configuration, with the BOWMAN digital communication system installed between the rear two seats.” The BOWMAN fit on the standard vehicle (interior photography of which is usually prohibited as some aspects of the comms system are Classified) was so bulky that only a single soldier could sit in the rear of the crew compartment and even then the vehicle was cramped if OSPREY, and later VIRTUS, body armour and load carriage equipment was worn

One of these up-armoured Protected Command Vehicle or PCV versions of the PANTHER, FD20AB, was displayed at the June 2009 Defence Vehicle Dynamics expo, held at Millbrook Proving Ground, where it took part in a British Army dynamic display. Other than additional armouring to the sides and front of the wings, there are few clues that this variant has had its protection increased by two STANAG Levels as the additional armoured plates are concealed between the outer and inner body skins of the crew compartment or citadel. However the soft top over the rear cargo compartment, which is intended to be sacrificial if the vehicle strikes an anti-armour mine with a rear wheel, is the easy identifier that this is one of PCV variants. It has been suggested by some commentators that the rear cargo compartment hard top was replaced with a soft top as a weight-saving measure and to compensate for the armour package, but this seems unlikely as the original structure was quite light in weight.

An official 2009 UK MoD description of the PANTHER Command Vehicle, which is slightly misleading as only between 67 of the batch were up-armoured to Theatre Entry Standard with STANAG Level 3 protection, stated: “Weighing 7 tonnes, PANTHER is air transportable, and can be underslung beneath a Chinook helicopter. PANTHER is armed with a 7.62 mm L7 general purpose machine gun equipped Remote Weapon Station, which can be upgraded to a 12.7mm/cal weapon if required, and an appropriate day/night sighting system. The armoured citadel provides crew protection from small-arms fire and Level 3 blast mines. PANTHER will be in widespread use with Various Commanders, Sergeant Majors, and Liaison Officers for Armoured, Armoured Recce and Armoured Infantry Units. PANTHER will also be used as the Commander’s vehicle for Engineer Troops, Anti-Tank, Mortar and supporting fire platoons. It will be used to rebroadcast on Battlegroup nets and by Regimental Signal Officers.”

Although the TES version of PANTHER was produced primarily for service in Afghanistan, following drawdown small numbers were used overseas on training exercises, with some of their ECM (Electronic Counter-Measures) equipment and the prominent ‘paste table’ rear superstructure removed. The examples directly above and below were photographed with the British-led multinational brigade deployed to the CENAD Chinchilla training area in Spain on Exercise TRIDENT JUNCTURE 2015 and with Falcon Area Survey and Reconnaissance Squadron of the Royal Tank Regiment deployed to Jordan on Exercise SHAMAL STORM 2016. I did not spot any basic configuration PANTHER CLV versions in Jordan but both standard NATO Green and Desert Stone TES variants served side by side, albeit indifferent roles, in Spain.

In theory many of those roles PANTHER was introduced for could be filled by the JLTV (Joint Light Tactical Vehicle) when, or should that be if, it is eventually ordered and enters service… but I, for one, am not holding my breath on that score. Call me a cynic if you wish, but as it has taken UK Defence Procurement an incredible 14 years to replace the Sea Harrier with the F-35 (which earlier this week deployed aboard HMS Queen Elizabeth with an operational squadron for the first time) to give the Royal Navy integral air cover again I doubt if a PANTHER replacement rates very high on the list.