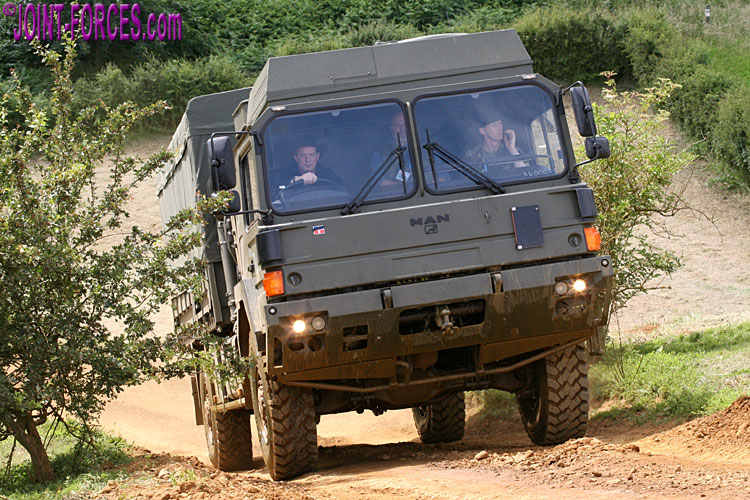 In this second article covering the MAN Support Vehicle In UK Service we look at the Prototype and Series Production phases plus Fielding of the fleet, writes Carl Schulze.

Prototypes and Series Production: In the autumn of 2006 a first batch of 14 prototypes of different SV family variants was delivered, and trials commenced in October 2006. These trials were conducted at different locations, both in the UK and abroad.

During initial trials vehicles were driven some 16,000km and trialled in conjunction with some 700 different load combinations, as well as with different trailer types. The trials involved extreme climatic condition tests, wading tests, load interfacing tests, human factors integration tests, and noise and vibration tests. The prototypes of the Modular Armour Kit were also put through ballistic and blast tests.

Series production started in late 2006 while user trials were still in progress, and involved many businesses that served as subcontractors to prime contractor MAN Truck & Bus UK Limited (now Rheinmetall MAN Military Vehicles). The truck chassis with cabs were assembled at the MAN Nutzfahrzeuge Österreich AG plant in Vienna, Austria. Cargo and flat platform bodies were built by Marshall Specialist Vehicles at their plant in Mildenhall, where they were also married with the chassis. Tanks and pumping equipment for the Unit Support Tankers were manufactured and installed by Fluid Transfer International at the company’s plant in Nailworth. Recovery bodies and recovery equipment were produced and fitted by EKA Limited at their plant in Gerrards Cross. All winches fitted to the SV trucks were manufactured by Rotzler GmbH & Co. KG in Steinen, Germany. All Crane Attachment Lorry Mounted (CALM) cranes installed on the SV fleet were delivered by Hiab(Hydrauliska Industri AB). Ressing Fahrzeugbau GmbH of Villach, Austria provided the Modular Armour Kits that can be installed on all vehicles if required.

In March 2008 some 100 vehicles were shipped to the British Army Training Unit Suffield (BATUS) in Canada, becoming part of the vehicle fleet used there by units rotating through for live-fire exercises and tactical effects simulation exercises (TESEX). Simultaneous to entering service with training establishments, vehicles were also issued to units where they slowly replaced a fleet of more than 14,000 older trucks and trailers.

Today, MAN SV trucks serve with nearly every unit of the British Army and Royal Marines. A smaller number are on duty with the RAF and Royal Navy. The bulk of SV trucks in Winterised/ Waterproofed configuration are in service with 3 Commando Brigade, Royal Marines.