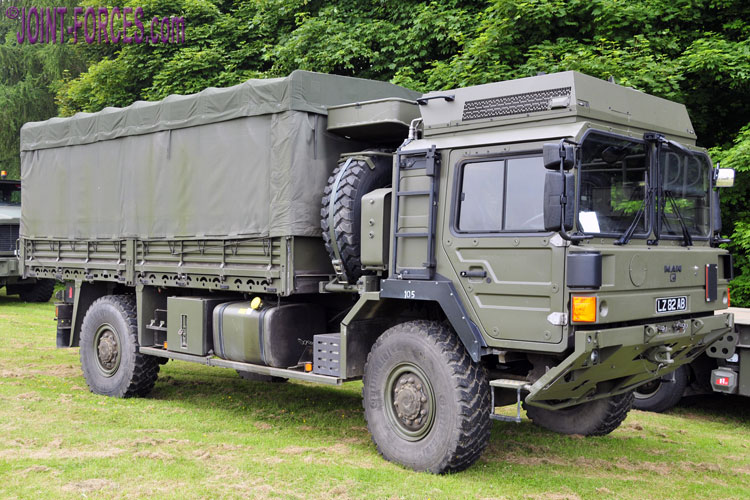 The Support Vehicle Cargo Light 6 Tonne 4x4 Euro 4 MAN (SVCL) is the most common variant of the SV family with some 4,000 units procured [©CS]

In this first article of a multi-part feature covering the MAN Support Vehicle in UK Service we look at the history behind the current logistic truck fleet, writes Carl Schulze.

From 2007 onwards the Support Vehicles (SV) truck fleet delivered by MAN Truck & Bus UK Ltd replaced a range of older designs that had been in service with the British Army since the Cold War. The MAN SV fleet consists of different cargo vehicles with a payload of 6, 9 or 15 tonnes, as well as unit support tankers and recovery vehicles in Medium Mobility (MM) configuration (on the MAN HX chassis), and in Improved Medium Mobility (IMM) configuration (on the MAN SX chassis).

In the late 1990s the British Army’s transport vehicle fleet mainly consisted of trucks with payloads of 4, 8 or 14 tonnes, manufactured in the UK by Bedford, Leyland-DAF, Foden and Scammell. Dating from the Cold War, these vehicles were showing their age and suffering from wear and tear. Another issue was the availability of spare parts due to the fact that most of the manufacturers of the trucks had ceased trading. It was against this background that the UK Ministry of Defence (MoD) initiated three projects to procure new, modern and more capable trucks.

The Future Fuel Vehicle (FFV) project was revealed to the public in January 1998, followed by the Future Cargo Truck (FCT) project in August 1998 and Future Wheeled Recovery Vehicle (FWRV) project in September 1999. Initially it was planned to fund the vehicles by private finance initiatives (PFI) but, deemed unsuitable, this plan was dropped in March 2001.

Support Vehicle Project: In April 2001 the FFV, FCT and FWRV projects were relaunched as conventional procurement projects, while at the same time the FCT and FWVR projects merged to become the Support Vehicle (SV) project. On 8th January 2002 an Invitation To Tender for the SV project was issued to six selected bidders; namely Oshkosh (USA), Volvo (Sweden), Mercedes-Benz (Germany), Stewart & Stevenson (USA), Leyland Trucks (UK, but owned by Paccar in the USA) and MAN (Germany, represented by its subsidiary MAN Truck & Bus UK Ltd). At that time the SV project had a value of £1.6 billion and aimed to procure 8,620 vehicles. Final bids for the contract were submitted by the manufacturers in October 2003 and about a year later the Defence Procurement Agency selected MAN Truck & Bus UK Ltd as preferred bidder. This decision was followed by a £1.1 billion order for 5,165 vehicles and 69 recovery trailers, issued on 31 March 2005.

The original contract also included an option for another 2,077 vehicles, and this was exercised in June 2006. An advanced maintenance package was also included in the contracts, as well as spare parts and labour for five years and 1,098 Modular Armour Kits. In addition to the original contract, the MoD ordered 107 extra vehicles to serve as carriers for the Falcon tactical communications system, and five to serve as a base for the Land Environment Air Picture Provision (LEAPP) situational awareness and battlespace management system. Another 87 vehicles were procured with urgent operational requirement (UOR) funds to address the operational needs for a modern Enhanced Palletised Load System (EPLS). For a breakdown by type see MAN Support Vehicle Variant Overview.