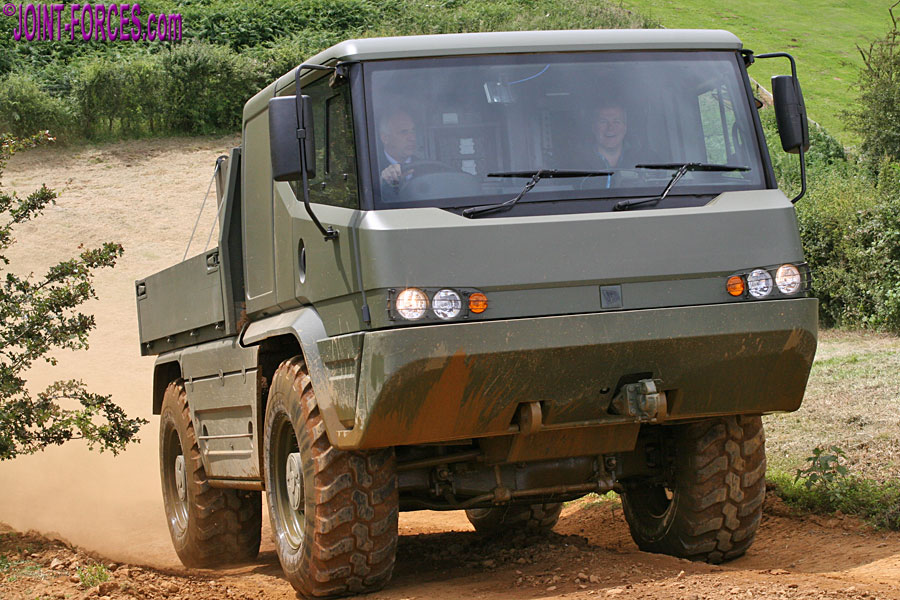 This brief article on an interesting British light military truck concept that never came to fruition was inspired by a recent comment on social media which prompted me to delve back into my photo archives.

In the middle years of the first decade of the 21st Century, with sizeable land forces contingents deployed on two fronts, on what were intended to be nation-building operations, the British military was in need of a new 4-tonne payload military truck with good off-road capability to supplement the forthcoming larger and heavier (6 to 15 tonnes payload) MAN SV or Support Vehicle. At the 2007 Defence Vehicle Dynamics (DVD) expo at Millbrook Proving Ground in Bedfordshire several manufacturers, including JCB, displayed smaller all-wheel drive light logistic trucks which met proposed future requirements… but by now the defence procurement emphasis was fast changing from softskin to armoured vehicles, in response to the escalating challenges posed by asymmetric warfare and the widespread use of the improvised explosive device (IED) against resupply vehicles.

Unlike most other vehicles in this class, which were essentially derived from commercial road trucks or virtually hand-built using a mixture of drive components sourced from a range of manufacturers and tailor-made for short-run assemblies, the HMUV had been purpose-designed for military use. However it used a high proportion of JCB’s own well-proven commercial off-the-shelf (COTS) components, which not only gave commonality with other in-service vehicles, but also allowed international back-up on a scale that few other manufacturers could provide. With over a thousand dealers worldwide, covering 150 plus countries and parts depots in Asia, Europe, the Indian subcontinent, the Far East and both North and South America, there were few places on the planet where JCB spares were more than 24 hours away.

In June 2006 I was invited to the JCB headquarters to see a new concept vehicle being unveiled by the company best known for its diggers and high speed (Fastrac) tractors. This High Mobility Utility Vehicle (HMUV) demonstrator appeared later that month at DVD 2006 as a static exhibit, and it certainly looked the part, though it was still not quite ready for the world to see it performing under realistic off-road working conditions. By DVD 2007, however, this Fastrac-derived, fully airportable, 4-tonne payload, 110km/hr 4×4 light logistic truck had completed its development phase and was stunning watchers with its superb handling and performance.

Measuring 5632mm long by 2415mm wide, and with a cab height of 2616mm, the basic HMUV was of forward control design with a flatbed, dropside rear body. Its design payload was 4000kg, wading depth was intended to be 1500mm, road speed was quoted as being 65mph (105km/hr), and the suspension was dual level to give a high degree of mobility off-road while still allowing the vehicle to be transported inside a C-130 Hercules. The standard cab configuration was for two, but a double cab option to take six in addition to two ammunition pallets, was possible; one did not need a degree in rocket science to work out that this would make it an ideal airportable light gun tractor. A 6×4 version, giving additional payload capacity was also on the cards, and both armoured cab and armoured personnel carrier variants were under consideration.

Unfortunately, with the focus of the UK defence procurement machine necessarily changing to finding workable protected vehicle solutions to reduce the number of fatalities and serious injuries among troops on operations in Iraq and Afghanistan, the 4-tonne truck requirement faded away. Although JCB exhibited at DVD 2008 they did not bring the HMUV and by the autumn of that year the international economic downturn had caused the company to decide, with union agreement, to put its factories on a four-day week and so this intriguing truck project was dropped; the vehicle did, however, make a brief appearance on the big screen in Captain America: The First Avenger, which was mostly filmed in the UK in mid-2010.