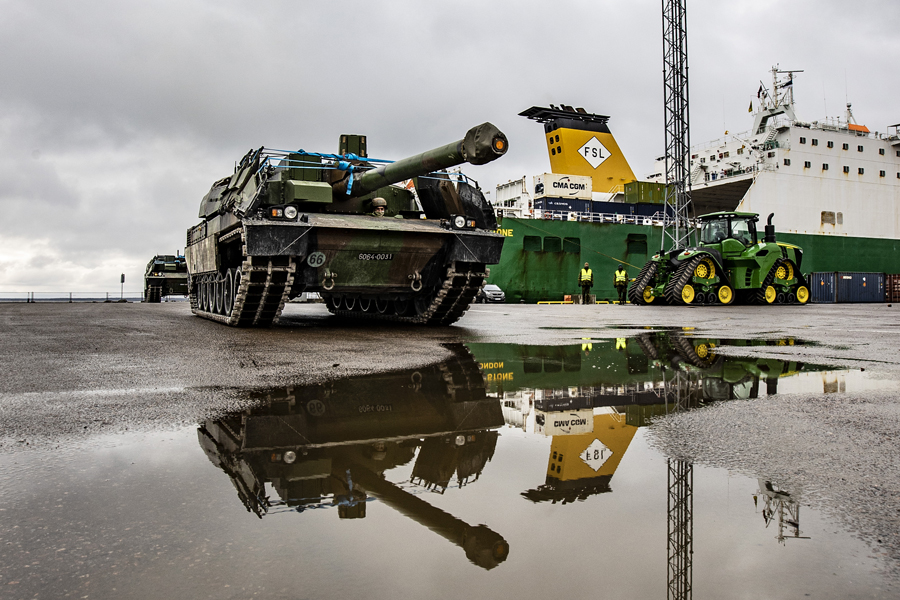 EDF Press Release, Tallinn, 18 March 2021: French and UK Army vehicles and equipment arrived by sea into an Estonian port on Wednesday 17 March 2021 to support the NATO enhanced Forward Presence Battlegroup based in the country.

The ship’s load, which covered more than two thousand nautical miles between the Port of La Rochelle in France and Paldiski, included 12 of the iconic French Leclerc tanks as well as a range of armoured vehicles such as the 8-wheeled Véhicule Blindé de Combat d’Infanterie or VCBI. There were also large transporter vehicles, recovery vehicles, trucks, trailers, and fuel tanks.

“There are many challenges from organising the use of a civilian port, unloading a vessel this size in a good time and using certain routes to the likes of Tapa with escort vehicles,” said Lieutenant Jon Caulder SO3 Movements NATO eFP. “The UK, Estonia and France have different regulations and policies for doing this, but we work together to get the best solutions to ensure vehicles and equipment come off the ship, onto the port side and to their destination.”

The UK consignment on board included armoured vehicles such as Warrior and Bulldog, field guns and 4×4 all-terrain vehicles. Both these and the French vehicles and equipment were off-loaded by a team of UK and Estonian movers.

“The arrival of French troops and the rotation of UK unit gives us an opportunity to train reception procedures and to develop cross-nation cooperation. It is great that our allies have decided to use different modes of transportation to deploy to Estonia – using air, sea and land. This provides us with a chance to test our interoperability in different transportation hubs and proves vividly, that moving allied units to Estonia is not hindered by the pandemic,” said major Lauri Kiviloo, Commander of EDF Support Command’s Movement and Transportation Service.

The UK vehicles and equipment will be used by the 1 MERCIAN Battlegroup which is arriving in Estonia this month for a six-month deployment and seamlessly taking over from the 5 RIFLES Battlegroup as lead element of the NATO Battlegroup based in Tapa. A French contingent of nearly 300 personnel, which started arriving in Estonia earlier this month, will use its vehicle and equipment during a year-long deployment. The French, who have already completed two eight-month missions in Estonia in 2017 and 2019, will be integrated into the UK-led Battlegroup during one year this time which forms part of the 1st Estonian Infantry Brigade.

Footnote: On Monday 15th we asked the main UK MoD Press Office for any Statement or Press Release on the MV Eddystone involvement in transporting the French LYNX 9 SGTIA out to join the UK Battle Group in Estonia and, as requested, we backed up our call with an email. Five days later (20th) we have heard nothing back.